Okay, I've finished the movies, so here's some final thoughts.

First, the closing awards before "The Owl and the Sparrow". They did something new this year by inviting all the filmmakers on stage for the awards. Here's a pic (and I'm sorry I couldn't get everyone in the shot): 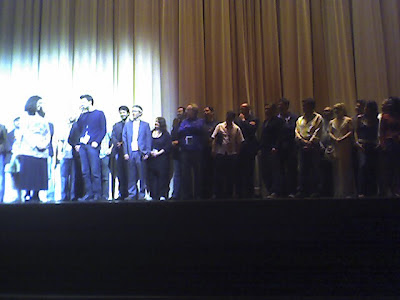 This created a couple of moments that I loved. First, all the filmmakers got 2 standing ovations (one when they got on stage, and one after all the awards were given). Second, you can see the winning filmmakers reactions when their name is called. It's sort of a "Miss America" moment, and especially nice if you're in the front row and have a good view of the filmmakers. The look on Cullen Hoback's face when "Monster Camp" was announced as the audience award for best documentary was priceless.

In other awards, you can see the official Cinequest wrap-up and awards here. Some of my comments:
"Indestructible" as best documentary is exactly right!
I was surprised that "Blood Car" won the jury award for New Visions, but pleasantly surprised. I didn't think the jury had the right kind of retarded sense of humor.
The more I think about it, "Outsourced" was a charming crowd-pleaser, but also the most predictable movie in the festival. I'm sure it'll get picked up for distribution (if it isn't alread).
Somehow, even seeing 53 movies, I managed to miss the best narrative shorts ("Dinner for One" for the jury prize and "Gordo" for the audience prize) and the Maverick Spirit winner, "The Bothersome Man".

That reminds me, with seeing 53 movies, the ones I'm most sorry I missed--based on what I've heard from other people--are "The Bothersome Man", "Pure Hearts", and "Holes In My Shoes".

Oh yeah, and 53 movies in a single festival is a new record for me. Cinequest claims the attendance was 70,102, but I'm assuming they counted me 53 times, so it's at most 70,049. And I know many other people saw multiple movies. I didn't meet anyone who saw more than me, but if everyone had than it would really just be 1,322.7 people. Or, to put it another way, the total attendance this year was just short of 1,323 Jasons.

So with seeing so many movies, it's only natural to ask what my favorite was (I got that a lot). Well, I can't narrow it down to one, and I'm sure I'm forgetting some great ones, but the movies I've often answered when asked are (in no particular order):
"Border Post"
"Seven and a Half"
"Indestructible"
"Monster Camp"
"Blood Car"
"A Dog's Breakfast"
"You Are Here"
"The White Silk Dress" (despite a few problems, I have to mention it as the best tear-jerker in the festival)
"The Prince's Respite"
"Slumming"
All the Mindbener shorts, especially "Máquina"

Yeah, that's a good bunch of movies there. Really, the ones I remember a few months from now are the really great ones.

This year I spent more time partying with filmmakers than in previous years, aided by the fact that I was taking the light rail into work at night and often there was almost an hour long wait between the last movie I saw and when the train came by. That was very cool. I must keep doing that in subsequent years.

Although I didn't keep track, I probably averaged less than 4 hours of sleep per day during the festival, many days only getting 2 hours. That was brutal. I think I gave myself a mild case of caffeine poisoning. Cocaine is a hell of a drug drink! But I spent the past couple of days de-toxing, so now I'm ready for the Asian American Film Festival...which starts tonight.

Thanks for all the recaps Jason, I'm just sorry I never saw your blog until the last day of the festival! My son and I saw around 25 movies each, so we count as one Jason, haha. We look forward to seeing you next year, perhaps then we'll have a chance to talk more. Your film friends, "That Mom and her Teenage Son".

Thanks Pischina. And it's great that you're taking your son to the movies. Hook 'em while they're young, I say!

So did you see any movies that I missed and you think I should seek out? The top of my list is "Bothersome Man", "Pure Hearts", and "Holes in My Shoes".