Okay, first, I've gotta abbreviate that title for posts from this festival. From now on, it's "Asianfest". As in, my next post on the festival will be titled, "Jason goes to Asianfest--day 2".

First, a few notes about how I do Asianfest. They don't have a pass to see everything unless you donate a whole lot of money, and I'm just not that rich/motivated. So for this one I'm buying individual tickets. Also, tickets over the web have a service fee attached, so I buy tickets at the theater the day of the event. This is kind of a mixed blessing. The bad part is some shows sell out and I'll miss them, or even if I don't there's the stress of waiting in a rush line hoping to get tickets. The good part is I can decide day by day what I want to see or even if I have the energy to go up to the city and see anything. I know that sounds crazy, since of course I want to see everything. But dammit, I just got over seeing 53 Cinequest films, and I'm exhausted. I'll try to hold off burn-out for another week, then rest up before the SF International.

Anyway, opening night was at the fabulous Castro Theater, and they had a pretty well packed house for Justin Lin's ("Better Luck Tommorow", "Annapolis", "Fast and the Furious: Tokyo Drift") new mockumentary, "Finishing the Game". In fact, so packed that they cordoned off the center section for the first dozen rows or so just for VIPs. So for a while it looked like I'd have to sit in the front row way off to the side. But when the lights went down and there were still seats in the front row center section, I sneaked over there, two seats right of center.

As for the movie, it's based on the fact that when Bruce Lee died unexpectedly in 1973, he left unfinished his dream project, "Game of Death". In reality, 5 years later the 30 minutes of footage he had shot was inserted into a "finished" version of the movie with a whole new cast and a couple of stand-ins for Bruce Lee. In "Finishing the Game", Justin Lin imagines the first attempt, just after Bruce's death, to finish the movie. So it follows the stories of several actors vying for the part of Bruce Lee. Included are the pretty boy Bruce Lee rip-off Breeze Loo (a take-off on Bruce Li), the Indian doctor Raja (a karate expert who's also Breeze Loo's stunt double), the white guy who claims to be half Chinese and doesn't realize he's an outsider in Asian American culture, and many others. Oh yeah, and Colgate Kim, a wannabe actor who's girlfriend is his manager and who's first gig turns out to be a porn shoot (any movie in which a character accidentally wanders onto a porn set gets a few extra points in my book). And Troy Poon, a talented actor who's career ended abruptly when his white co-star on a hit cop show was found dead of autoerotic asphyxiation surrounded by several embarrassing implements. And Remy Nguyen, a timid, sad Vietnamese man who's family was all killed in the war. Okay, that's enough, it's got a huge, talented cast (more on that later), and some hilarious jokes. In particular, the clip from the Breeze Loo movie where he battles an evil wizard/Nazi sympathizer--"Fists of Fuhrer", is brilliant. But let me not spoil too much. I had a great time watching the wacky hijinx as the casting process turns into a shambles.

Here's a pic of director Justin Lin talking just before the movie: 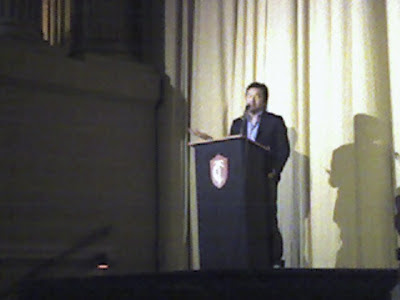 And here's a pic of the whole cast (at least everyone who was in the house, wich was practically the whole cast, maybe there was an extra or two missing): 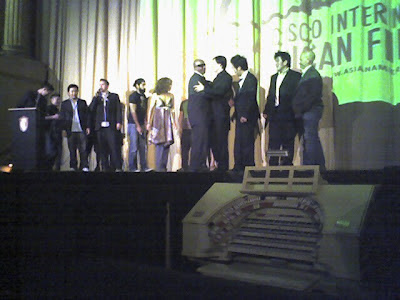 I'm not going to bother trying to identify everyone in that picture, but I will point out the well dressed black guy in glassing shmoozing his way down the line. He plays Roy Thunder, the head of a talent agency representing "colored" actors--all colors: black, brown, yellow.... He's the pride of Fremont, and was sitting just 5 seats away from me for the movies. M.C. Hammer! At the after party, I didn't have the guts to ask him if he was heading back to Fremont and if I could get a ride with him.
Anyway, on to the after party, which was a blast! Good food, and lots of drinks. Crown Royal was a sponsor, and I tried my first CR Manhattan (pretty good). I also tried my first lychee martini made with Han vodka (also good). And Cathay Pacific airlines presented their signature first-class drink, "Pacific Sunrise" (champagne, drambuie, with lemon and orange zest--delicious). I also ran into Carlos Montalvo and Kathleen Powell from Cinequest (and they're new venture jaman.com, which I have not yet had much time to explore. Then I ran into Jeff Ross and Fay Dearborn from Indiefest. So having Cinequest and Indiefest was a little like having two girlfriends who at the same party--awkward! But I introduced Jeff to Carlos and they started talking shop, so I made an industry connection. I'm so totally a mover and shaker. Which is great, because moving and shaking are two of my favorite activities! Unfortunately, Kathleen was busy talking to someone else, so I didn't get to introduce her to Jeff.
Okay, that's it for now. Two movies (hopefully, if I can get up there on time) tonight, including "Big Trouble in Little China". Finally, I'll be able to enjoy that movie without feeling a little guilty about the racism!
Posted by puppymeat at 1:32 PM

Asiafest... that's a great word and so much better than SFAAIFF. I can't even remember that many letters in a row, let alone as an acronym.

I missed meeting you at the gala. Carlos mentioned that he ran into you and that you go to every festival... which is weird, because I do too!

Sorry I missed you, too. I'll be around most of asianfest, including the extra weekend in San Jose, so maybe I'll run into you there. I'm the big-haired guy in the front row.

I'll be at Air Guitar Nation tonight. I'm the girl with black hair, bangs, and glasses... but unfortunately that's a very popular look these days. My profile photo on Jaman is pretty much accurate.