First, some updates on doggies I forgot to mention before. "Military Intelligence" had a brief doggy cameo, and of course several dogfights. "Super Amigos" was Mexican, so there were doggies all over the place. And in "Prague" there was a doggy in the background when Christoffer and his wife Maja are fighting in the street.

Okay, this is a few days late. Cinequest is over, and I've gotta finish writing it up before I go to the Asian American Festival starting tomorrow. On the plus side, I'm reasonably well rested now.

Of course, I couldn't say that Saturday morning, when, with about 2 hours of sleep, I started early to see "Love Sick", a Romanian about about sexual perversion. This was the one movie where sitting in my customary front row center seat was not really a good idea. As I said, I was already very tired. Also, there were a lot of close-ups in this movie. And there were a lot of subtitles, that often went by pretty fast. As a result I couldn't read and watch the characters quickly enough. So I kinda dozed in and out during the movie. But I could follow the basic story--young college girl falls in love with a (female) classmate, her brother goes crazy with jealousy. Yup, there's lesbians and there's incest. And I could tell the acting was great and it was very well made, I just regret I was physically unable to give it the attention it deserved. Hopefully it'll play at another film festival in the area, or will be available on DVD. Of course, given it's gay content, it's likely to play in the SF bay area again, so I'll keep an eye out for it. Oh yeah, and there was a quick doggy cameo I caught in the background while one of the girls was getting into a cab.

Next up was another entry into my favorite little niche of filmdom--a Balkan comedy, "Two Players From the Bench". More dark slapstick absurdity, this time with a political, post-war twist. It opens with Ante, a big, loudmouth Croatian, singing with his Croatian buddies about how the Hague will never convict indicted war criminal Colonel Skoko (who's only seen in photos, and kinda looks like Sean Bean). He's approached by a mysterious man in a suit who asks him if he really wants to help Skoko. He agrees, and is then taken to an undisclosed location and introduced to Katran, a wimpy little Serbian. Katran's there because his brother-in-law betrayed him, stole his wife, and sold him ostensibly for his kidneys. Turns out he was sold, and Ante volunteered--to play stand-ins for exonerating witnesses for Skoko. Turns out they're dead ringers for guys who allegedly kidnapped the colonel at the time when he was allegedly committing his massacre. Ante's all for it, but Katran has reservations--mainly because Skoko slaughtered his unit in the war. Of course, when Ante learns Katran is Serbian, he finds out that Katran's unit actually slaughtered his unit. So there's a little tension. Of course, they're both pawns, and ultimately greedy and so can be bribed into anything. And wacky, wacky hijinx ensue. I loved it, and I suppose it can be seen as an interesting examination of post-war Balkans, racism, and cooperation. But really, I just liked the jokes.

So next up was definitely the most fearless and personal (and also the best) documentary of the festival. "Indestructible" is the story of Ben Byer, a struggling actor/filmmaker and an energetic, reasonably athletic 31 year old father of a beautiful son. And then he was struck with amyotrophic lateral sclerosis, aka ALS, aka Lou Gehrig's disease. So he turns the camera on himself, and over three years, with the help of his family and friends, documents his deterioration. The result (and by the way, he's still alive, was at the screening and could still be filming and editing today if they didn't decide they needed to just finish it and get it out there) is amazing. His journey takes him to China for an herbal cure, which is semi-successful (at least it seems to slow the progression). He stays in China for an experimental spinal operation that ranges from useless to dangerous. Back home to recuperate he realizes that the operation was a failure, and documents his daily home life--ranging from hilarious (most of the time with his adorable son) to heartbreaking (a family fight which to me is the key to the film). Ultimately his journey takes him back to his Jewish roots and a trip to Israel to find religious meaning, which ends it on a nicely poignant note. I just have to say one more thing about the family fight. It wasn't anyone's best personal moment, but without it everyone in the movie is a saint and no one's a real person. This movie stretched my emotional limits in only two hours, I can't imagine how everyone involved suffered through this for 2 years (at the time, 5 years now). And watching someone who can barely stand up get up and storm/stagger out of a room, only to stagger back just to tell everyone off is a truly extraordinary sight. Oh yeah, and he owned a doggy and keep watching through the credits--there's a bonus doggy scene at the end.

Okay, so then I walked over to the California Theater to catch the first one and a half stories of "Seven and a Half". As you may recall, I screwed up the previous weekend and arrived about a half hour late to it. Luckily it was a series of vignettes and I could follow the rest without missing the first one. Anyway, the opening credits were really cool, and foreshadowed everything in cartoon silhouettes. Then the opening sin was Greed--two con artists/soccer fans write a letter to Maradona begging him for charitable money, only to realize--just after they mailed it--that they forgot to translate it into Spanish. And then the beginning of Wrath--turns out the steroid addled boxer is out to get the guy who kicked his ass 5 years ago. At the time, he was just a scrawny kid. Then the ass-kicker got sent to prison, and the scrawny kid worked out (and took steroids) every day until he was a bigger ass-kicker, but one who couldn't control his rage. Oh, and other things I noticed--the cafe featured in the Envy segment was also shown in Greed and Wrath. And I think I noticed the pig from Gluttony in the gym in Wrath, but it might have been a different guy. So just watching the first 30 minutes, I can tell it's a movie that greatly rewards multiple viewings.

Okay, then I snuck out of the rest of "Seven and a Half" to see the rest of the shorts program "Docu-nation". As you may recall, I saw "Half-Life: A Journey to Chernobyl" earlier in the week.
"The Fighting Cholitas"--Cholitas are indigenous Bolivian women, who wear the traditional large, colorful skirts. The Fighting Cholitas still wear the skirts, but take them into the wrestling wring. Another movie about Lucha Libre for justice (this time racial and gender respect)? This just begs the question: can two movies make a theme?
"A Prayer for Area 23"--I saw this docu-poem about children with AIDS in Africa at Indiefest. But this time I noticed it was produced by Stray Dog Films, so it's another doggy movie.
"Relative Freedom"--Joe Kuehne interviews his very strict, religious family about their reactions to him coming out as a homosexual. Inspired, funny, and occasionally tragic. Although mostly funny, since I really can't sympathize with anyone who breaks into tears because her brother is gay.
"Spitfire 944"--William Lorton inspects his grandfather's old WWII 16mm movies. He wants to find anyone in the footage, and when he realizes he can look up the serial number (944) of the Spitfire he saw crash, and find out who the pilot was, he gets a brilliant idea. This was my favorite one of the series.
"Stringers"--A day in the highly competitive lives of cameramen who make a living selling their footage to news stations. Pretty cool. 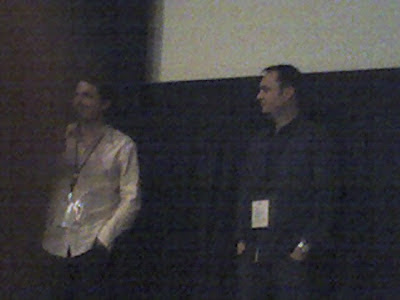 Here's two pictures of the makers of "Long Pigs", unfortunately I lost my notes on who is who. And more importantly, who cares? It's just more poorly lit, lo-res camera phone garbage. 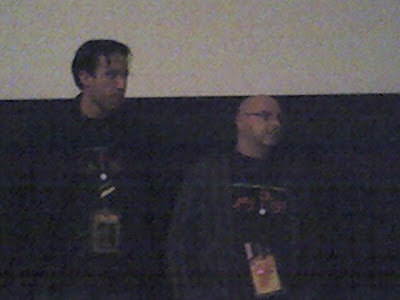 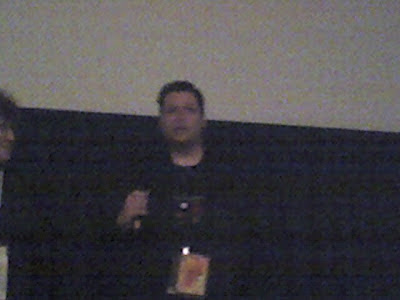 Posted by puppymeat at 1:19 AM