And, as bonus news, I'm working the midnight-8 am shift at work, so I'll be able to watch movies all day (including matinees), go to work, go home, sleep for 2-4 hours, and then go back to the movies, for the entire festival. I think I'm going to die from lack of adequate sleep!

Anyway, the opening night film was Mira Nair's ("Salaam Bombay", "Monsoon Wedding") newest film, "The Namesake", starring Kal Penn ("Harold and Kumar Go to White Castle", "Van Wilder 2: The Rise of Taj"), here flexing his dramatic muscles. Mira Nair was in attendance to introduce the film, and told how she made it in a fit of passion after burying a parent who had died unexpectedly. The story spoke to her as a story of sudden loss of a family member, and as a story of a person caught between two cultures (in fact, the two cultures she straddles--American and Indian). Kal Penn plays Gogol Ganguli, and American of Indian descent (although born in New York), who as a young child likes his unusual name (named after his father's favorite author, the Russian Nikolai Gogol), but as he grows up he grows to resent it, eventually changing his name (to Nick, in fact). His two names end up representing the two halves of his personality/culture--Gogol=Indian, Nick=American--and it's the story of how he (sometimes painfully) reconciles the two. It's a very good movie, full of the humor and heart that is typical of Mira Nair's work, but ruined by horrible audio flaws in the theater (which obliterated what I assume was the climactic emotional dialogue between Gogol and his mother).

Anyway, hopefully the audio glitch was not a sign of things to come. After the movie it was off to the after party, where--since I went from the party to work--the question of what I drank and how much will be discretely left unanswered. Actually, that's the one down side to working right after the movies--I can't drink like I want to. But it's worth it to be able to see the matinees.


Anyway, here's a picture from the after party of me with Cristina Khuly, the director of "Shoot Down". I'm going to see her movie on Sunday. I'm trying to start a new fashion--"Monster Camp" headbands with "Shoot Down" postcards tucked inside. 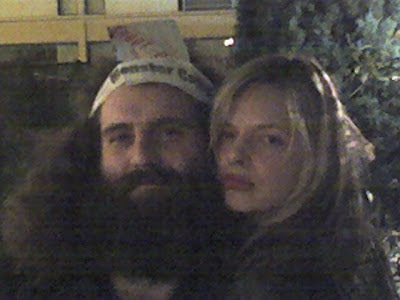 Posted by puppymeat at 2:17 AM