By the way, a couple more pictures of me from the CQ after party, courtesy of NBC 11 news (www.nbc11.com). First early in the party, and then much later.

Okay, after working most of the night, I went home, got a little sleep, and was back at the movies by 1:45 pm for the matinee screening of "Prince of Soap", a Finnish romantic comedy. Ilona is a starving actress working in a small experimental troupe that sometimes draws as many as 5 audience members to a show, but does really important (i.e., unintelligible) work showing how capitalism destroys human kindness. Unfortunately, this doesn't pay the bills, so she auditions for a popular soap opera, Burning Hearts. She's summarily dismissed from the audition, but accidentally wanders into the wrong room and ends up hired as a writer. Then she falls in love with the lead actor Kalle, who's having an affair with the married producer Raakel. If this sounds like a soap opera plot itself, that's no coincidence. In fact, the whole premise is that the soap opera's plotlines are autobiographical. So of course, wacky hijinx ensue. Also an excellent example of a trend that's been catching on for a number of years--employing wildly varying cinematographic styles in the same movie, for either dramatic or (in this case) comic effect. My favority cinematography gag is showing the filming of the soap opera scenes, but having the center masked off and filtered like it looks in the final show, while the edges (showing the boom mike, etc.) are in black and white. Very cool, and a very funny movie.

Then it was a shift of gears to a slow Chinese drama, "Courthouse on Horseback". The travels of a rural traveling court, two old veteran judges and one rookie who travel along a winding mountain road to four villages (Chicken Tail, Chicken Belly, Chicken Neck, and Chicken Head), dispensing justice and settling local squabbles. Feng is the leader, and his longtime assistant is being forced into retirment, hence the rookie, who is to be her replacement. At each village, Feng shows the importance of knowing the local customs, and rules on squabbles both weighty and petty, often in surprising and humorous ways, which confound the young rookie. For example, at the first village the dispute is over a pig who has accidentally dug up the neighbor's ancestors' burial mound, which is a terrible insult. Feng rules that the defendant must give the plaintiff a pig and perform a Buddhist ceremony to appease the spirits. This is all fine, except for two things--first, although the defendant is willing to give a pig, he insists his ancestors' spirits are against the neighbors coming over and taking it. So Feng himself takes the pig and delivers it to the plaintiff (which the rookie finds very undignified). Second, the rookie points out that the national court can't order a Buddhist ceremony, so Feng officially strikes that from the ruling (but privately tells the defendant that of course it'd be wise to go hire a Lama anyway). And so it goes on. There were a few technical glitches in the presentation, due to the fact that the film print didn't arrive yet and so they showed the screener DVD, and every 20 minutes or so the film company's logo popped up onto the screen. Also, the subtitles were not the best, either in presentation or in translation. Still, it was an interesting look at a part of China I've never seen.
Then it was time for a shorts program, "Ties and Expectations" all in one way or another about relationships. I'll go through these quickly:
Bomb--a young boy and girl find an unexploded bomb in a field. A chilling dark comedy-drama about how some people (the boy) live around so much danger that they don't even think about it, and it takes an outsider (the girl) to be frightened.
Car Jacking--a hilarious tale of a woeful boxer and a shoplifting granny who thinks the boxer is trying to steal her car.
Carmichael and Shane--a hilarious mockumentary about a single father raising twin boys. Since he doesn't have the resources to give them both a good life, he does the only responsible thing--he chooses a favorite.
Kubuku Rides (This is It)--A dark, dreary look at alcoholism and abuse through the eyes of a young boy watching his mother fall apart. Very sad.
Love Seat--Kinky, very very kinky. He likes to sniff her chair, she likes to beat him up for sniffing her chair.
Lucky Days--A view from inside the TV at 7 people who might just win the big $100 million lottery jackpot. Very funny, and interesting look at different ways people regard the lottery. Here's a pic of the director, David Elver: 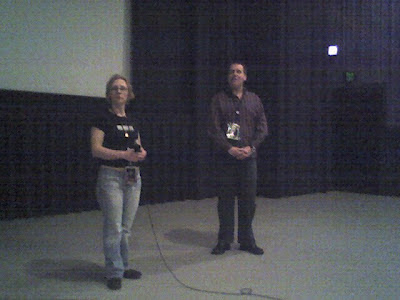 Men Understand Each Other--A man calls up his best friend in the middle of the night worried because his wife hasn't come home. Of course, the friend knows exactly where the wife is.
We Won the War--A little girl has a brief conversation with an old man in a laundromat, who tells her about the first time he ever had to slit someone's throat. Technical problems with this showing, the picture was stretched vertically so the top and bottom were off the screen, and the sound was too loud. Otherwise it would've been a lot better.
Voilá l'Histoire--A french art piece which looked like found/captured footage that the director put together with voiceover/dubbing to make a statement about the Serbian war. Long and pretentious and boring.
Okay, then it was over to the fabulous California theatre for a hilarious romantic comedy, "You Are Here". Hey, I just realized I started and ended my day with romantic comedy. That wasn't planned, but worked well. It's a story of clubs, unrequited love, drugs, waking up naked in a vetrinarian's office, dead gangsters, and Taoist philosophy, and sex. Need I say more? Okay, I'll say this--Mick is awesome, and if you just do what you like and trust in the universe, it'll all work itself out.