Hey, that's not a movie!

But it was Mexico vs. Ecuador at the Oakland Coliseum (I think that's NetAss Coliseum now?) Co-sponsored by San Jose Earthquakes LLC, it was a great opportunity for Lew Wolf, the organization, and the fans to show their dedication to soccer in the Bay Area. And it was a great drinking opportunity. We got there around 5:00, the tailgate had been going since 3:00. A couple of hours of drinking and pigging out, then our wave of blue marched into the stadium. Here's a shot of the Club Quakes caravan heading in: 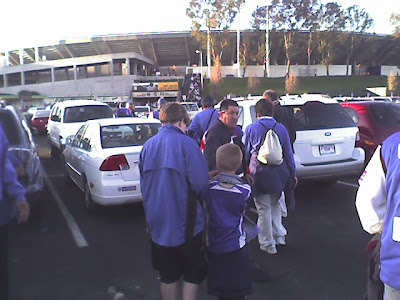 Here's a shot of the field from our seats. Pretty sweet section. Normally $60 tickets, Club Quake got them for $30 pre-sale. Rumor has it you could get up to $150 for them if you wanted to scalp them. But screw that. 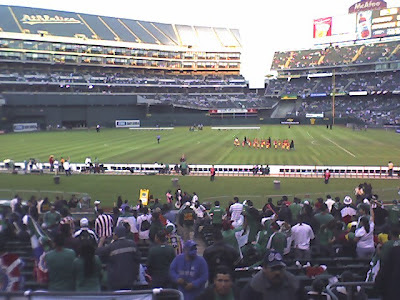 It was insanely loud with all the Mexico fans (and some Ecuadoreans), and the game itself was very exciting. Mexico scored first within 40 seconds, and it looked like it'd be a laugher. But the middle part of the game went to Ecuador, who tied it before the half and went up 2:1 early in the second (and all of a sudden the Ecuadorean fans were visible). But then they started playing defensively (and poorly, lots of long clearances to nobody) and were either gassed or just got out of the game mentally. The final 25 minutes belonged to Mexico, who scored 3 more goals to make it 4-2. And a good time was had by all (except Ecuador).

The fans were really amped up, and about 90% supportive of us Quakes fans. A few gave us a little shit, but it's not like the Mexican national team competes with a non-existent MLS team. And many had fond memories of and good hopes for the future of the Quakes game. Here's hoping when (and it's looking pretty sure now that it's when, not if) we have our team back, some of these fans will come to the games in San Jose.

Email ThisBlogThis!Share to TwitterShare to FacebookShare to Pinterest
Labels: not movies

So some of the Mexican fans gave you shit? What kind? Could you refuse it & give it back?

And for me...fond memories of seeing the Quakes with my blue beard spray. Oh, and don't forget the awesome San Jose Frogs...ok...go ahead and forget them. Go Quakes. Maybe they'll be back by the time I retire...I'll have lots of time to travel and watch. Woo. Hoo.

Hey, there was actually a Frogs pre-season game/tailgating opportunity tonight. But I skipped it to go to my book club meeting tonight. I can't wait for the Quakes to be back.