Those of you paying attention will notice I have no post from day 5. That's because I had to work late on Monday, so no movies for me (boo hoo!).

But now back to Tuesday's movies. First was a documentary pair, "A Dream in Doubt" with "Someone Else's War". Have I mentioned that the documentaries have been a highlight this year?

"Someone Else's War" was a 30 minute piece about third country nationals (or TCNs) working for Halliburton subsidiaries supporting the soldiers in Iraq. Although Halliburton runs commercials showing Americans talking about how proud they are to be in Iraq supporting the troops, actually 80% of their employees are TCNs, and are almost all from southeast Asia (India, Sri Lanka, and the Philippines, although it's technically illegal for Filipinos to work in Iraq). They're recruited by unscrupulous contractors, given a work order to go to Kuwait, then after arriving told to get on a truck to Iraq or pay a $1000 fine and have no job (this after spending their life savings just paying their way to Kuwait). In Iraq, they're in a fenced off ghetto on base where a dozen men sleep in one shipping container. They basically live in squalor and are paid slave wages. It's sickening. My only complaint about the movie (other than the fact that this story is happening at all) is that it's too short. At 30 minutes it's just starting to feel like there's a feature length movie there, and then it ends. So I'm happy to report that Lee Wang said in the Q&A that he's working on a longer cut.

And the feature doc (although still less than an hour long) was "A Dream in Doubt", about the Sodhi family of Sikhs who immigrated to America from India to practice religious freedom. On September 15, 2001, Balbir Singh Sodhi was the first Sikh murdered in a post-9/11 hate crime. I could rant about the idiot who doesn't know the difference between a Muslim and a Sikh, but really I should rant about the idiot who lumps everyone wearing a turban together with Bin Laden. Thankfully, that particular idiot is rotting in prison for the rest of his life. The movie follows the life of Balbir's brother Rana Sodhi and his family as he struggles with reconciling his belief in the American dream with the 9/11 aftermath of attacks on Sikhs (interestingly enough, they left India in the first place because there was a lot of anti-Sikh sentiment there). Particularly trying were a) the teasing his son (who's a very sweet, intelligent boy) got at school, actually forcing them to switch schools, and b) another brother, Sukhpal, was killed while driving his taxi in San Francisco. Although initially it was assumed to be another hate crime, it is now ruled to be a stray bullet from a nearby gang fight. It's still an unsolved case, and police don't expect it to ever be solved.

The movie also touches on other examples of post-9/11 violence against Sikhs. And although it's easy to be overwhelmed by the few bad apples who make America look like an ignorant country full of murderous assholes, there's also a silver lining shown in the movie--how the community came together to support Rana and his family after Balbir's murder. In the Q&A, Rana said that although he's lost two brothers, the outpouring of support from the community makes him feel like he has hundreds of new brothers. So that leaves me with some hope for America. 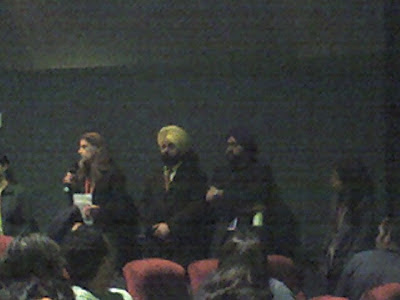 And the second movie of the night was the Filipino supernatural thriller "Ang Pamana: The Inheritance". It's a story of Filipino-American siblings Johny and Anna who travel back to the Philippines for their grandmother's funeral. The inherit the choice piece of property--the family's estate farm--which pisses off the rest of the family until they learn that it also includes taking care of Tommy, the mentally retarded boy who lives on the farm. They travel there with Vanessa, a smoking hot socialite who (sadly for Johnny) is their cousin. When they get there, they slowly learn that the farm is haunted by monsters from Filipino traditional folk tales (particularly Manananggal--a beautiful woman who splits in half at the waist and turns into a fetus-eating vampire, and the Kapres--a tree giant who smokes cigars). I thought it was a pretty good monster thriller, but the mostly Filipino audience was totally eating it up. These are monsters that every Filipino knows about (as I found talking to my Filipino friends at work the next day).

This has actually been a theme in movies for me this year--every festival I seem to see a movie or two that, while enjoyable, is aimed at an audience other than me. "Rolling" at Indiefest was aimed at users of ecstasy. At Cinequest, "The Namesake" was great but the Indians in the audience were cracking up at things I thought were mildly amusing. And now "Ang Pamana" continues that trend. I actually really like it, because it gives me a taste of the culture and with the right audience I can feel when a movie really works with it's audience. This one totally worked.

Here's a pic of director Romeo Candido, asying a few words before the screening: 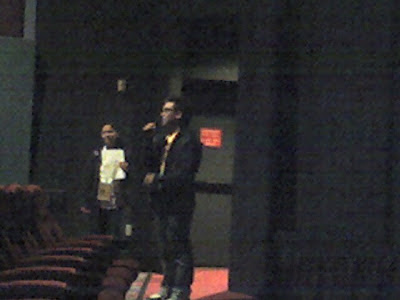 And here he is again with some of the cast at the Q&A after the film: 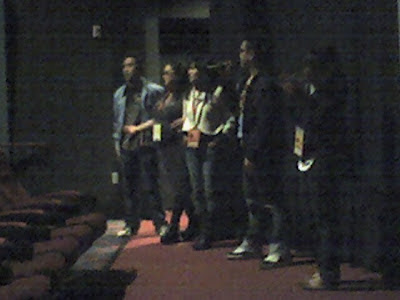 Totally off topic, but I went to see 300 in an Odyssey theater with 2 females you may know and I must say it was one of the worst movies I've ever seen. Still it was good for a laugh. I'm going to write up a review on my blog about it.

Really? I haven't seen it yet (too busy with festivals) but plan to see it next week. I've heard good things about the look, and varying things about its racism, homophobia, etc. (for the record, a gay friend of mine loved it). Go ahead and write your review, but I won't read it until I've seen the movie for myself.