All right, Sunday was my day of the most highly anticipated movies so far, in no small part because I've been drinking with many of the filmmaker's earlier in the festival.

The day started out with "Shootdown", a documentary about the incident in 1996 in which the Cuban Air Force shot down two American civilian planes over international waters. Oddly enough, I barely remember the incident (I was in college and that tended to be pretty isolated from the outside world at the time), so this was kind of a history lesson for me, too. Director Christina Kuhly is actually the niece of one of the victims, and she still managed to make a very balanced but provocative documentary about the events leading up to and following the shoot down. The victims were on a mission for the group Brothers to the Rescue, which started years before as an organization of pilots who would search for and rescue the Cubans who set out for Florida in makeshift rafts. They started out as a peaceful group that was actually a big help to the Coast Guard and the border patrol (while they were up there they would even report suspicious activity that might be smuggling). However, when Clinton implemented the "wet-foot, dry-foot" policy towards Cuban refugees, their mission changed. No longer just content to do search and rescue (when rescue would just mean returning to Cuba), they became a more outspoken activist group, at one point even invading Cuban airspace to drop leaflets on Havana. So, of course, this got Castro's attention. Anyway, I don't want to recap the entire movie, not just because I want to leave you with some surprises, but because it's so dense I could write about it for ages. I'll just say, it's a great documentary, very balanced (it even includes footage of Castro responding to the incident, actually from an unaired interview with Dan Rather). And the whole situation with Cuba is so complicated that about the only thing I know for sure is they were absolutely wrong to shoot down the planes with no warning. Beyond that, how to fix US-Cuba relations, I haven't the foggiest. I just trust that eventually all the assholes in power will be replaced with better people. In the meantime, I don't begrudge anyone who fights however they can to improve the situation, just don't ask me what the best course of action is. By the way, the Q&A afterwards got a little heated, but it just shows you what a hot button the subject is, and how people will often see (or not see) what the want to see, no matter how balanced you are. Here's a pic of director Cristina Khuly, producer Douglas Eger, and a guy who was there representing Amnesty International, whose name I forget, sorry: 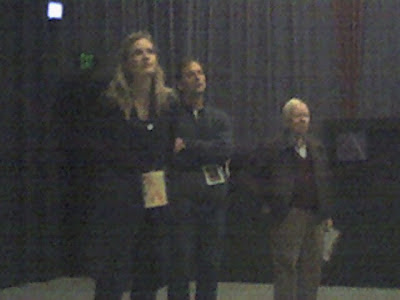 Next up was a hilarious mockdocumentary, "The Doorman". Trevor W is the New York club scene's most important guy--the guy who can make the difference between you getting in or staying outside. He knows everybody, and is living the good life. Trouble is, he doesn't really know himself. Bigger trouble is, he doesn't know who Nicholas Cage is. And that leads to him getting fired leaving his job at his club and finding new work elsewhere--like at PetCo. A compelling and sympathetic look at New York's coolest loser. Here's a pic of the Doorman crew: In the center is director Wayne Price, on the right (with the ice cream cone) is Trevor W himself, and on the left is one of the producers, and I can't remember his name. 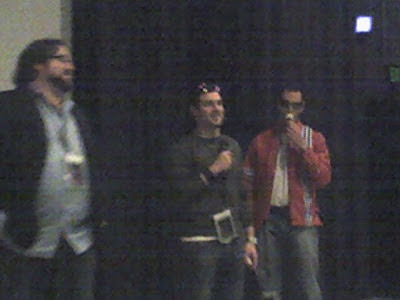 Then it was a bit of a change of pace, with the Chinese movie, "Curiosity Kills the Cat", a solid action/drama/puzzle, about a series of vicious red paint attacks. Momo is an aspiring photographer, but with only a camera phone to use. She observes the well-to-do people around her, but when she decides to help a handsome security guard solve a case of vandalism against a car in a parking lot he patrols, she uncovers deadly secrets of infidelity across socio-economic classes. It's mostly long, drawn out stretches punctuated with often brutal acts out of the blue (one scene in particular, with an ashtray, was particularly shocking). Very well done.

Then it was another fine documentary from some filmmakers I've been drinking with. "Monster Camp" looks into the world of LARPers (Live Action Role Playing). In particular, it follows the players in the Seattle chapter of Nero. Now I don't do LARP, I don't even do role playing games. I've never played D&D or WOW (World of Warcraft, which everyone in the movie has played). Put I can dig watching people have fun. And to the filmmakers' credit, they don't make fun of the participants. Not that it would be hard--there are overweight people, there are people pushing 30 still living with their mom. There are people who've spent 4 or 5 years as high school seniors. But hey, they're cool with it, and in fact a lot of the players have become cooler by being a part of it (yes, they actually developed social skills in the game). And for those keeping score at home, this was my 100th movie so far this year, so who am I to judge someone else's obsession? (of course, I do have my own apartment and a kick-ass job playing with radioactive materials, but that's another story). Here's a pic of director Cullen Hoback, who also did last year's "Freedom State", which is the movie I was most disappointed to miss at Cinequest last year (but I have it on good authority it'll be out on DVD sometime soon). 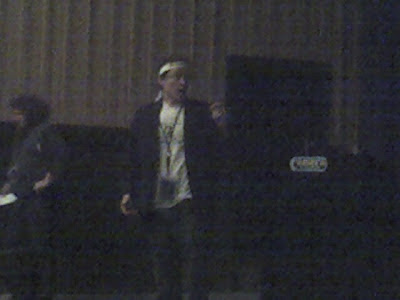 And finally, the retarded good-time movie of the year, "Blood Car". But first, the short "If I See Randy Again, Do You Want Me To Hit Him With the Axe?", a bloody hilarious movie about lumberjack safety and respecting the lumberjack code and the chain of command. Moral of the story--be a blue jacket, not a green jacket. Okay, now "Blood Car". The basic premise is that in the near future gas is so expensive (over $30 a gallon) that nobody but the ultra rich drive. So a vegan dweeb named Archie tries to invent a car that runs on wheat grass, but ends up inventing one that runs on blood. There's a possible political allegory here, but it's best to ignore it--or better yet, completely misinterpret it (yes, it is patriotic to kill people to fuel your car!) Because this movie is not about making you think or motivating you politically--it's about being as retarded and bloody as possible. And like most things car related, it's really about getting laid, as Archie finds that although the vegetable stand girl is nice, the meat stand girl is a freak (yes, Archie's got a little Betty vs. Veronica thing going on)! And, of course, when the government gets interested in his invention, the wacky hijinx just get wackier and hijinxier. Here's a pic of director Alex Orr: 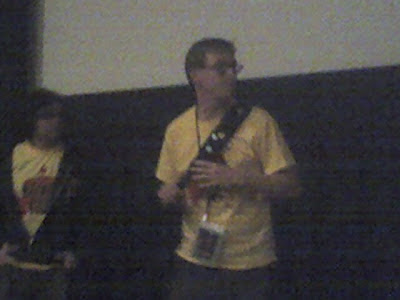 Posted by puppymeat at 3:43 AM