First up was the documentary "Lockdown, U.S.A", about the hypocrisy of the Rockefeller drug laws and the whole drug war. In interweaves the very personal, tragic story of Darryl Best, sentenced to 15 years to life for mistakenly signing for a package that wasn't even addressed to him (which turned out to be a pound of cocaine) with the very political, tragi-comic story of the coalition formed by hip-hop impresario Russel Simmons, New York politico Andrew Cuomo (son of Mario Cuomo), and comedian/activist Randy Credico (subject of "60 Spins Around the Sun, from Cinequest 2005) to repeal/reform the Rockefeller drug laws. Russel Simmons is the star of the film, I don't know if it was planned that way or if it's just through force of personality, and his determination to get something done mixed with his naivete regarding when he's being used is fascinating to watch. Ultimately something, but possibly not enough, gets done. It's also interesting after watching some very balanced documentaries like "Shootdown" to see one that's very definitely opinionated--it's very much for repealing the harsh drug laws, especially when it comes to mandatory minimum sentences. Also, although there wasn't an actual dog that I noticed in the movie, there was a bus that drove by in the background with a poster for "Lords of Dogtown", so I'm counting it as a doggy movie.
Next up was "Dimension", a fascinating high-concept piece based on the premise that God (or, as he's called in the movie--Ivan) grants one person the power to change peoples lives by changing anything in their lives by 3 inches. Many choose to be taller, many men choose the obvious addition. Some get fiscally creative--give me a 3 inch tall stack of $100 bills or add 3 inches of zeros to my savings account balance. Some get temporally creative--give me an extra 3 inches worth of thickness of calendars in time. One guy gets really creative--let me be born 3 inches further away, as measured on this map of the US (so I'm born halfway across the country). Of course, it's really about changing your point of view. Director Matthew Scott Harris is a first time filmmaker, and actually studied and worked as an engineer initially. In some ways his lack of experience shows--particularly in the editing and the sound. But some of the tricks he came up with to compensate actually work pretty well. I kind of dug the fact that because he had so many characters and no time to develop them, he just added text on the screen to explain, for example, 'this guy is drunk' or 'this woman's husband beats her'. It adds a sort of breezy feel to it all, and is the format for some good jokes. Oh yeah, and you have to wait until near the end, but there's a scene in a park and there's a woman walking a dog in the background. More doggies!
Then I saw the shorts program #4, Animated World. 15 shorts in this program, so it'll have to be really quick:
"13 Ways to Die at Home"--I saw this at Indiefest, and it's still funny. By the same guy who did the Cinequest trailer.
"Film Noir"--In-camera paper animation using a style reminiscent of "Copy Shop" and "Fast Film"
"First Flight"--Computer animated Dreamworks piece about a guy on his way to work who's interrupted by a baby bird.
"La Gallina Ciega"--Highly stylized, looked like chalk animation of a blind man losing his guide dog. Hey, doggy!
"Life in Transition"--Really beautifully illustrated hand-drawn animation with some bizarre visuals and my kind of humor. Including a wolf threatening a baby, which I mention only because a wolf is a kind of dog.
"Loom"--An old woman weaves a tapestry. Perhaps is the tapestry of your life?
"One Rat Short"--I was wracking my brains trying to remember where I saw it. Turns out it played as a bonus short with the Academy Awards nominated shorts put out by Magnolia Pictures, a CG story of a street rat who meets a lab rat.
"Our Man in Nirvana"--a rock star dies, and goes to heaven for a while. Very cool visuals.
"Perpetuum Mobile"--a kid is picked on by bullies, so escapes in the castle of a mad scientist who's trying to build a perpetual motion machine. There was a dog's howl in the background, so it's counted as a doggy movie!
"Phantom Canyon"--A black and white dream sequence of insects, snakes, men with bat wings, etc.
"Spin Cycle"--Things spin, like the universe, wheels, donuts, CDs, the universe again.
"Startle Pattern"--Claymation...fear...a look at motion when vision is somewhat obscured.
"Toll"--A CG documentary interview of an old-school bridge guardian. A troll's monster doggy still counts as a doggy!
"Ujbaz Izbeneki Has Lost His Soul"--He loses everything. Be careful, or he'll lose your soul, too.
"Windows, Masks and Doors"--also saw at Indiefest. And I'm still groovin' on it.
Here's a pic of Lee Lanier of "13 Ways to Die at Home" and Jan Koester of "Our Man in Nirvana": 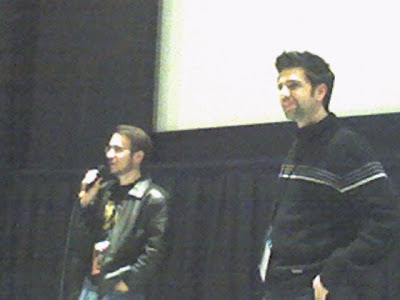 Next up was possibly the most pleasant, enjoyable movie of the festival, the fish-out-of-water comedy, "Outsourced" (or as I like to call it, "Mr. Toad's Wild Ride"). Todd runs order fulfillment for a company that makes tacky knickknacks, and he's just been informed that his department has been outsourced to India, and he has to go and train his replacement. He's not happy, but goes anyway because his stock options are just six months from vesting. Trouble starts right away, when he misses his ride from the airport (not realizing they think his name is Mr. Toad, not Todd). So dangerous cab rides, train rides, and gastrointestinal distress ensue before he even meets his local colleague. Once there, he tries to teach the team about the U.S., only to realize that the key to success is for him to learn about India (little inside joke, from another American businessman in country--India stands for I'll Never Do It Again). In many ways, recapping it makes it sound like a pretty formulaic comedy, and that's not entirely unfair. But it's so charming and works so well that I don't care when it's predictable. In fact, I was so into the movie that someone had to tell me afterwards that there was a doggy in the background of one scene. Another doggy movie! And a good movie to boot. Now I wanna go to India just for the colorful holy festival!
And finally, there was the WWII program, with the short "Der Ostwind" followed by the feature "Military Intelligence and You". "Der Ostwind" (The East Wind) is a first person account of a WWII German ace fighter pilot named Wolfgang (and if the Wolf part of the name isn't enough to make it a doggy movie, consider that he got into some pretty amazing dogfights).
"Military Intelligence and You" is a very cool, very funny, and very inventive use of public domain military training films (starring the likes of Alan Ladd, William Holden, and Ronald Reagan!) to make a mock training film about military intelligence. Using about 60% archive footage and 40% new footage (all set in central command), it tells the story of a squadron of US bomber planes fighting a mysterious "ghost squadron" of German planes, and the trials of the US Intelligence operatives attempting to find the secret landing field for those planes. Hilarious, though at some time heavy-handed in it's humor (not that I mind it's post-9/11, post-Iraq mocking of Military Intelligence, it just overused some of the jokes, and it broke the training film feel a few times). Here's a pic of produce Greg Reeves, writer/director/producer/narrator Dale Kutzera, and Cinequest volunteer Mike Gendimenico: 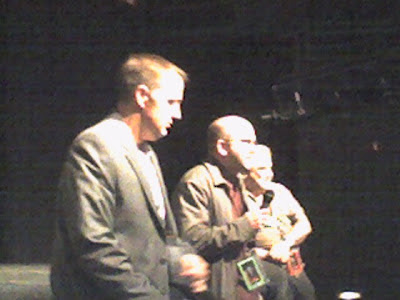 And that's the end of day 9. We're coming down to the final stretch now.

So wait, do I get this right? The comedy is by a guy named "Moran?" Like this guy is referencing: http://politicalhumor.about.com/library/images/blpic-moran.htm?

Heh, I bet he never heard that before.
// double ironic coming from a wiener!

Yup, that's his real name. Not only that, he happens to be the second Moran I've met.

That is, the second guy who's last name is "Moran". I've met plenty of morans.