Just one movie this night, but it was a great one. Hong Sangsoo was in town (Berkeley, where he actually lived for a few year) for a retrospective screening of "Virgin Stripped Bare By Her Bachelors". I've planned to see 3 of his movies at the festival (I already saw "The Power of Kangwon Province" and I'll see "Woman on the Beach" this Sunday). After "The Power of Kangwon Province", which was a bit of a challenge to wrap my head around, I thought that three movies is just about right. After "Virgin Stripped Bare By Her Bachelors", I wish I had tried to see all of his films.

"Virgin Stripped Bare" tells (in two different ways) the story of the romance between attractive TV writer Soo-Jung and her boss's wealthy friend Jae-Hoon. Her boss, director Young-Soo, fills out the love triangle (but really only in one version of the story). By the way, a mini-theme of the festival is Korean directors as characters in movies (or Korean-American, in the case of "American Zombie"). The three of them drink (a lot) together and in the first version of the story Jae-Hoon slowly woos Soo-Jung, who's a virgin. However, halfway through the movie this story abruptly stops (as Soo-Jung) is trapped on stalled cable car (which, by the way, features one of my favorite shots in the movie, a POV shot from the cable car as it ascends). Then the story goes back to the beginning for a retelling/re-imagining. In this story, Young-Soo also woos Soo-Jung (although clumsily and at one time almost raping her). And everything in the first telling happens slightly differently the second time. Perhaps this is a he said/she said scenario, as they both remember the courtship differently. Or perhaps (and this is just my preferred reading) one of the stories is a movie loosely based on their true-life story (and then, of course, the fun comes in thinking about which one is "real" and which one is "just a movie"). Either way, there's some really, really cool tricks Hong Sangsoo pulls off. I just kept thinking as I left, 'this movie contains it's own remake!'. Very cool, and now I'm soooo looking forward to "Woman on the Beach" (and finding DVDs of his other work). Yay!

Here's a pic of Hong Sangsoo from the Q&A after the movie: 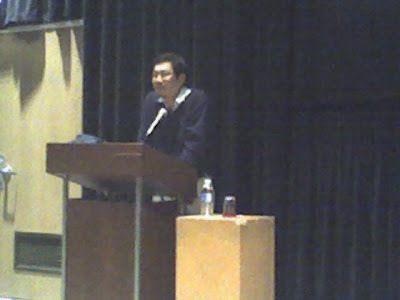