And strangely enough, at the end of the festival, no doggy movies on the last day.

First up was the short film, "Polka", a simply drawn, sweet animated piece about a girl who plays the violin and attempts to woo the businessman at the bus station. She fails to even attract his attention every day, until finally succeeding purely by chance.

Then there was the feature--a high school gay already-out movie "The Curiosity of Chance". It takes place overseas, in an American high school in Belgium, in the 80's (with enough 80's fashion, hairdos, and music to make a Smurf vomit). Anyway, the hero--Chance Marque--is an intelligent, iconoclastic, out gay boy. So of course he gets picked on by the steroid-addled football (that is soccer football, not American football) captain. But he also befriends his neighbor (who's also on the football team, and who just might be gay, too, or maybe it's all Chance's fantasy), makes a few weird friends, becomes a drag star, and greatly disappoints his military dad. But of course, it's an 80's (style) movie, so there is a happy ending. But along the way, there's a little strife and mostly a lot of laughs. Pretty cool all around.

Here's a pic of cinematographer Jack Messitt, director Russell P. Marleau, and producers Lisa Schahet and Kacy Andrews (unfortunately I lost my notes regarding who is who. I should confess, I was keeping all this on my cell phone, and it ran out of memory and I had to wipe everything. Fortunately I e-mailed these photos to myself from my cell phone before it died) 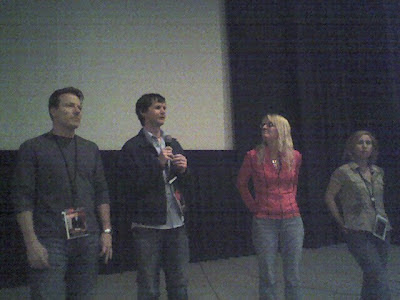 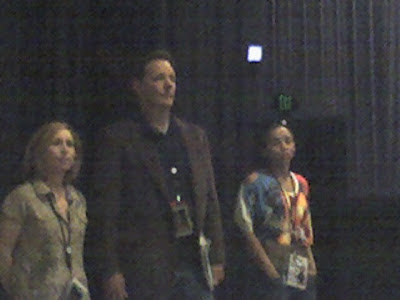 Alright, then it was over to the Rep one last time for "Midnight Clear". A few things I didn't know about this movie when I scheduled it: Stephen Baldwin's in it--cool! Director Dallas Jenkin's father Jerry B. Jenkins is the best-selling author of the "Left Behind" series of novels (I haven't read them, but my understanding is they're Christian novels about people--many of whom thought they were good Christians--who are left on earth after the rapture). I also didn't know that Stephen Baldwin had become a born-again Christian about 5 years ago. So it kind of surprised me when a movie that was very dark ended up having a positive, uplifting Christian message. Now, I've written before about how I'm not religious. In fact, I've written about being an atheist. But that doesn't keep me from enjoying a good story that happens to promote religious values. "Midnight Clear" is a very well made, well acted, and especially well written movie of intersecting stories (a la "Crash") about several desperate people on Christmas Eve. Stephen plays the lynchpin, Lefty (so named not because he's left-handed, but because he was so poor growing up that he had to borrow his big brother's left-handed baseball mitt). Lefty just got laid off at work for being drunk, got evicted from his apartment, and is in a legal fight with his ex-wife for visitation rights with his children. Nothing is going right for him. Meanwhile there's an old woman pretending to be preparing for a big Christmas dinner with a family who isn't coming to visit. There's a woman and her son visiting her brain damaged husband in the hospital. He used to be the church's youth group pastor, and the new pastor (who was in the car when he had the accident resulting in brain damage, but walked away okay) is having trouble motivating the youths the way he used to. And finally, there's an out-of-the-way gas station where the attendant, who once had dreams of making the gas station a huge success, still toils through a boring day with no customers. Things all come together, and without giving anything away, up until the last 10 minutes it could have a big downer indie-movie ending. But instead it has a positive Christian message. And without converting myself, I can still find it uplifting to see desperate people find solace in going to church on Christmas eve. Here's a picture of stars Kirk B. R. Woller, Stephen Baldwin, and Dallas Jenkins. 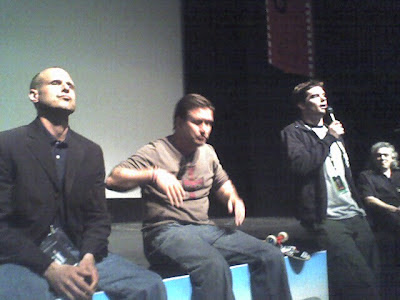 Okay, then I took a chance on a movie that sounded pretty weird and somewhat experimental, and turned out to be pretty funny, "Celluloid #1". It's a pretty wicked parody of filmmaking, specifically egocentric arthouse auteurs. Clayton Beaubien used to be the darling of the underground cinema scene, but he's now reduced to rumormongering on a Hollywood gossip show. He's attempting a comeback with an interview piece about empty Hollywood glamour starring Caprice Geoffrey, the equally egocentric star of the hit "White Bitch" (who, to quote the movie, has "got it goin' on"). In his way is her manager, Cyndi, who tries to protect her image. Shot in artistic/pretentious black and white (until they run out of B&W stock and switch to color, right when Caprice is praising the decision to use B&W), the whole thing runs like a parody of arthouse films, and a parody of "making of" documentaries. It took me a little while to get what was happening (I assume I did--it's a parody, right?), but then I was totally grooving on it. Here's a pic of director Steve Staso, star Julie Atlas Muz (who showed everyone how much she had going on in a burlesque show out in front of the theater the night before and an even burlesque-ier show at the after party), and writer Keith Bunker (whose birthday was that day, so happy birthday Keith!): 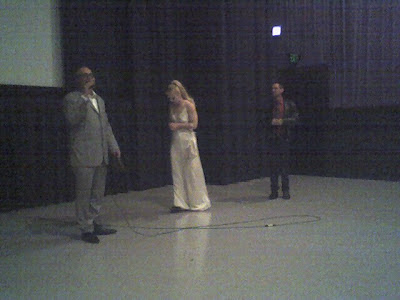 Okay, then it was back to the fabulous California Theater for the closing night. I ran just in time to get front row, 1 seat off-center (some of my fellow front row center friends got there first). They announced the awards, but I'll put that in a separate post. Right now I just want to write up the closing night film.

"The Owl and the Sparrow" is a charming little movie from Vietnam. Thuy is a little (~8 year old?) girl who works in her uncle's factory. Her parents are dead, so her uncle is actually her legal guardian, but he's more interested in putting her to work than being a parent. When she's scolded for a mistake at work, she runs away to the city (Saigon), where she lives on the street and survives on the kindness of strangers (and by selling postcards and then flowers). Two of the strangers she meets and befriends are Lan--a beautiful flight attendant who takes Thuy in and lets her stay in her apartment--and Hai, a friendly zookeeper who talks to the animals. In fact, Hai has had such bad luck in love that he's more comfortable around his animals than around people. Lan, also, has been unlucky in love. So Thuy hatches a plan to get them together so they can all be a family. A sweet, charming, and beautifully shot movie. Here's a pic of director Stephane Gauger, star Cat Ly, and the third guy I have noted was a producer, but I lost my not of his name. 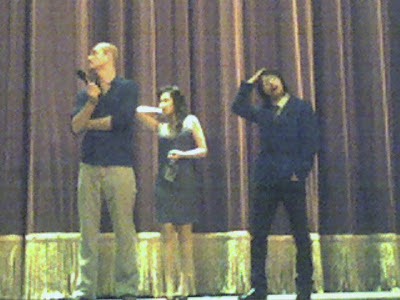 Okay, and that was Cinequest 17, I'll have one more wrap-up post shortly.

Posted by puppymeat at 1:20 AM

I was pleasantly surprised at the quality of Midnight Clear; I have a much-increased respect Stephen Baldwin as of now