Or something like that. It's the penultimate day. Have I mentioned I like the word "penultimate"? Anyway, it's been a few days, I've gotten some rest, so let's get to it.

First up was a documentary program, "The Cats of Mirikitani" with the short film "Pilgrimage". "Pilgrimage" is a short (22 minute) movie about the US Japanese internment camps during WWII. Specifically, it's about Manzanar, the monument there, and the group of former internees who formed the first memorial "pilgrimage" back to Manzanar. It's created in an interesting style, mixing newsreel, archival footage, and present day interviews.

"Pilgrimage" ties in with "The Cats of Mirikitani" because the title figure, Jimmy Mirikitani, is a Japanese American (born in Sacramento), who was interned in the camps. Although we don't know that at first. At first, all we know is he's an artist (who draws a lot of cats, hence the title), and appears to live on the streets in New York. Director Linda Hattendorf befriends him, and after 9/11, she takes him into her apartment. He lives there for 6 months while she (sometimes frustratingly) tries to learn his history, find him a place to live (senior assisted living, he's 80+ years old), tries to get him social security (over his major objections), and--most importantly--shares his art with the world. You see, Jimmy Mirikitani is a self-taught master artist who learned to paint the landscapes outside his internment camp and even became an art teacher there. A fascinating man and a great documentary. Here's a pic of producer Masa Yoshikawa, director Linda Hattendorf, and SFIAAFF director Chi-hui Yang. 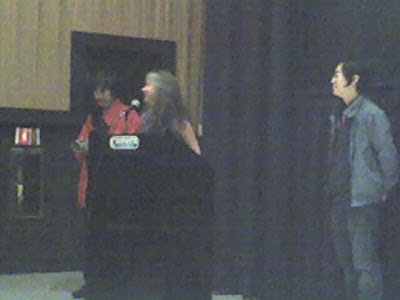 And here's the man himself, Jimmy Mirikitani, gracing the audience with a song. 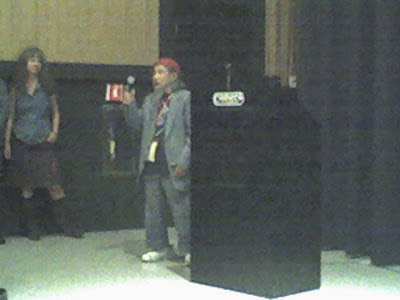 On a tangentially related note, there was a time earlier in the festival that I thought cats might be the animal of Asianfest, the way bunnies were at Indiefest and doggies at Cinequest. It started with opening night, when Breeze Loo in "Finishing the Game" kept referring to everyone as "that cat". There were a couple of others (the hippy zombie in "American Zombie" kept pet cats), but never quite became ubiquitous. But I suppose in a way I could say all the San Jose films (over this last weekend, days 10 and 11) are CATS movies, since they're sponsored by Contemporary Asian Theater Scene. Which means it's kind of a stretch, but I can make the joke that Indiefest did it like bunnies, Cinequest did it doggy-style, and Asianfest was all about the pussy. Maybe it's for the best...

Anyway, right after "Cats of Mirikitani", I was over to the other screen for the Korean historical epic drama/comedy/action/gender-bending love story "The King and the Clown". On release, it was the highest grossing domestic film in South Korean history (since overtaken by "The Host"), and it takes place during the reign of one of the most despotic, maniacal kings of the Chosun Dynasty. It follows the story of a pair of very talented comic acrobats, Jang-seng and Gong-gil. Jang-seng is the strong, stubborn, macho leader. Gong-gil is effeminate, and plays all the female roles in their skits. In fact, for the life of me I thought he was a woman, playing a man playing female roles (The film is purposely ambiguous, and I figured that, like in Shakespeare's time, only men were allowed to be actors, but they were breaking the rules). Only in retrospect, checking online to make sure I got the details right, did this become a very gay movie. Anyway, they escape from their troupe (when Jang-seng is angry/jealous that their director pimps out Gong-gil to a local bigwig, hence making it more confusingly gay), and travel to Seoul to make it big. Once there, their talents are quickly apparent, but drinking with fellow entertainers they Jang-seng discovers that what everyone really jokes about is the King and his famous womanizing. So they start putting on a skit that makes fun of the king, and gets them sent to prison and sentenced to death. However, they make a deal that if they can make the king laugh, they'll be freed. And, to everyone's surprise, the king does laugh (and later acts out their skits with his mistress). So they become court jesters, but court politics gets in the way, and tragic hijinx ensue. Awesome!

Next up was the Bollywood-by-way-of-Oakland fairy tale "The Mistress of Spices", from the creative team behind "Bend it Like Beckham". This time Paul Mayeda Berges, co-writer of "Beckham" and former SFIAAFF director (and husband of "Beckham" director Gurinder Chadha) moves into the director's chair for the first time. The beautiful Aishwarya Rai stars as Lilo, a spice mistress. She was orphaned at a young age, and escaped kidnapping (due to her magic power to see the future) to be picked up by an old woman who teaches the secret of spices. Each spice has its own power, and she can hear the spices speak. Grown up, the spices send her to Oakland to use her power for good. She lives as a sort of half-human/half-mystic, her fate bound to the spices. There are strict rules, which force her to give up any desire. She can't use spice magic for herself, only others; she can't let anyone touch her; and she can never leave her spice shop (never mind how she got there in the first place, it involves walking on fire and waking up where you're meant to be). Anyway, for a while she does an excellent job of helping her customers--finding just the right spices to solve their problems. But then she sees hunk Dylan McDermott, and she's awfully tempted to break her vows. And when she's distracted, she can't hear the spices as well, and bad things happen. As I said, a pretty good fairy tale story, and Aishwarya Rai is beeeeee-yoooo-tiful. The only problem is the inner monologue of her talking to the spices got really old. If they found a better way to show that (and in fairness, I can't think of one), then it would be a really great movie.

Next up was the documentary hit of the festival, "Air Guitar Nation". A documentary about the world Air Guitar championships. And yes, this time it is a real documentary, not a mockumentary (although it's hard to believe for the first 20 minutes or so). If you're wondering why this is in an Asian film festival, it's because Korean-Americans are currently dominating the world of competitive Air Guitar, disciples of this film's hero, C-Diddy (and his "Asian fury, air supremacy). The movies about the World Air Guitar Championship started in Oulo, Finland, and the fact that America--the home of Rock and Roll--has never competed. That is, until 2003. That year the American Air Guitar Championship first crowned a nation champion. The two major competitors are C-Diddy and Swedish-American Bjorn Turoque. There are others, too, but the duel between those two is the heart of the movie. After C-Diddy defeats Bjorn Turoque in NY, he travels to LA to meet the west coast champion in a final air-off. But who should show up to compete in LA but Bjorn himself (who's defeated in the west coast championship by Krye Tuff). C-Diddy beats Krye Tuff to represent the US at the World Championship. But when he gets to Oulo, who's waiting for him but perennial runner-up/sore loser Bjorn. To his credit, in the qualifiers (which C-Diddy skips as the US champion) Bjorn does give the best performance ever (at least in terms of scores--it's scored like figure skating and he got an unheard-of 6.0/6.0/5.9). So it sets up one final showdown in the finals where...I won't give away the ending. Awesome, high energy, and very silly (no matter how seriously they pretend to take it).

And the final movie of the night was the Asian-American gangster movie, "Baby". Moving back and forth in time, it tells the story of the title character, a little kid nicknamed "Baby" by the gangsters next door. When he's just a little kid, he falls in with the gang, which provides an alternative to his alcoholic father. Tommy the leader takes him under his wing, but there's one guy--Benny--who always gives him a hard time. In a gang fight, Tommy gets killed and Baby kills a rival gang member. So he's sent to juvenile detention for 7 years. The movie is really about what happens when he gets out. Benny's now in charge, his father is still messed up (and spending all his money at Benny's club), his girlfriend is with a new guy, and his best friend is trying to keep him out of the gang life. It's a story of his struggle between living the clean life and getting revenge (especially on Benny, who's still giving him all kinds of shit). Very impressive. It's been described as the Asian version of "Boyz 'n the Hood", and I think that's pretty appropriate.

And that was day 10. Just one more day left to write up.