So the Primitive Screwheads, the fine people who brought you (or me) Evil Dead Live, Re-Animator Live, The Texas Chainsaw Massacres, and the Crazy Go Nuts Show, are wrapping up their run of H 3-D: The True Tale of the Haddonfield Babysitter Murderer (last show tonight, March 24). I skipped out on the SJ opening night of Asianfest to see it, and it was a blast. Based loosely on the Halloween movies, but with lots of silly humor (like Michael Meyers isn't his real name, Michael was his middle name, but his real first name is Oscar), and buckets of blood. Oh yeah, and beer. Yeah, that's the important stuff--blood and beer.

Anyway, here's what I looked like after the show: 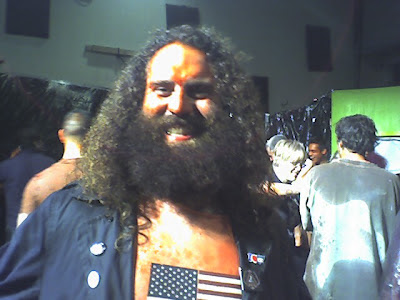 And here's some other fans, with cast member Chris Bowen (who played retarded boy Gilhooley Verkamp, and is a very convincing retard) 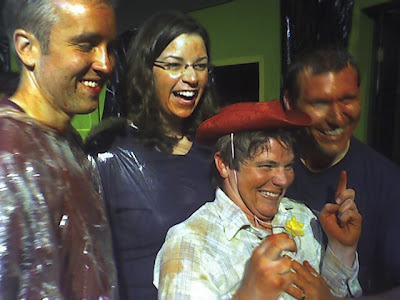 And, in keeping with my new-found interesting in publishing upcoming cool stuff, look for them to put on Night of the Living Dead...Live, this June!

Email ThisBlogThis!Share to TwitterShare to FacebookShare to Pinterest
Labels: not movies, primitive screwheads