Four funny films a few weeks ago. Sorry, but I gotta make this brief.

DIVOT DIGGERS (1935): Our Gang gets up to a heck of a lot of mischief filling in for the striking caddies at the local golf course.

THE CHIMP (1932): Laurel and Hardy work at a failing circus. In fact, when the circus folds instead of back pay they get...a flea circus and a chimpanzee. Wacky hijinx ensue (especially when the chimp has the same name as their landlord's wife.)

MANHATTAN MONKEY BUSINESS (1930): Charley Chase, with a little windfall expects to have a nice night out. But when he accidentally overtips the cabbie, he's left with no money for dinner and has to work it off while keeping up appearances. Very funny.

DIRTY WORK (1933): Laurel and Hardy as chimney sweeps, making quite a mess in a mad scientist's living room. And then things get stranger when the are introduced to his amazing rejuvenation tank. Wacky, childish hijinx ensue.

I've never been to J-Pop before, and didn't have the time to seen anything else. But big thanks to my friend Maria for cluing me in on opening night and the fact that the brilliant Tadanobu Asano would be there (FYI, look for him in an upcoming Scorsese film)

For the event, they played a 35 mm print of the 2001 film ELECTRIC DRAGON 80,000V.
[Completely aside, it would be more convenient but less impressive to use 80KV]

Asano plays Dragon Eye Morrison, who was electrocuted while climbing a tower in a power plant as a child. Now he plays electric guitar and is prone to violent outbursts of electricity. Don't piss him off. Meanwhile, Thunderbolt Buddha is a vigilante with a penchant for electric weapons. So of course they have to face off. And it's pretty epic. Or, as Asano explained, it was a lot of yelling and playing guitar, which was right in his wheelhouse at the time (he has evolved as an actor since then, but his most popular roles will always be the batshit-crazy ones.)

Posted by puppymeat at 9:59 AM No comments:

Email ThisBlogThis!Share to TwitterShare to FacebookShare to Pinterest
Labels: J-Pop 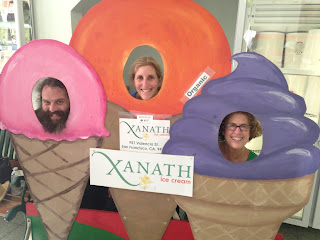 Posted by puppymeat at 9:39 AM No comments:

Catching up on my blog some more. I saw this with a couple of wonderful ladies (my aunt and cousin) in Menlo Park. I had also seen the first ~20 minutes at the SF International Film Festival before a fire alarm drove us all out of the theater.

Anyway, Sir Ian McKellen plays an elderly, retired Sherlock Holmes, suffering from the onset of senility and living out in the country taking care of bees. He's struggling to remember the facts of his last case, so that he can finally write his own story and correct some of the misconceptions (intentional or otherwise) that Watson and and his books' illustrators had created. But there's more there than just setting the record straight, there was something about that last case--a seemingly ordinary affair of a husband wanting his wife followed to find out what she's up to--that upset him enough to make him retire. The story is slow at first, and takes some dead ends (the trip to Japan and viewing the devastation of the A-bomb has potential, but ultimately goes nowhere.) But McKellen's fine performance keeps everything interesting. And as the clues unfold, we get a nice conclusion about how a good story is more important than getting all the facts right. Which is a pretty good moral for an intentionally revisionist take on Sherlock Holmes.

Okay, the last night of the festival in Palo Alto. A month ago Thursday:

First up was MY SHORTEST LOVE AFFAIR, a frank and sexy drama about a pair of lovers who reunite after 20 years apart and after one night of passion they learn two things. First, they're going to become parents. Second, that they don't really work well as a couple. Over the nine months of the pregnancy they argue, they fight, they're...pretty awful to each other. But they always get back together and at least try to make it work. Whether or not that's a good idea is up to the viewer to decide (spoiler alert: it's not.)

And finally we ended the Palo Alto week with a screwball comedy, MR KAPLAN. Septugenarian Uruguayan Jew Jacob Kaplan worries that his life hasn't amounted to much. Certainly compared to great figures like Winston Churchill or Simon Weisenthal. As his abilities fade (and he loses his driver's license) he becomes obsessed with an old German man living nearby whom his graddaughter calls "the Nazi." Is he, perhaps, an actual Nazi war criminal who has escaped detection for so many decades? Perhaps he can play the Weisenthal to this man's Eichmann? Along with a drunk ex-cop Kaplan hires to be his chauffeur, the game is afoot. And of course, wacky hijinx ensue.

A month ago Wednesday. Two movies.

THE ARMOR OF LIGHT tackles a very interesting, important, and timely subject--how in the world is "pro-life" consistent with "pro-gun rights?" Okay, that was oversimplified, which gives the wrong idea about this smart and thoughtful movie. As is the hero of this movie, minister Rob Schenck, a devoutly pro-life (also spoiler alert--born Jewish, hence it's inclusion in the festival) activist who has a crisis of faith/culture about the pro-gun tendencies in his flock. Taking a hard stand against abortion while justifying gun violence just doesn't sit with him, and so throughout the movie he goes on a sort of spiritual quest and then (the beginnings of) a political fight to be pro-life and pro-gun control. In the Q&A afterwards, director Abigail Disney (granddaughter of Roy Disney) talked about rolling out both the movie and the political/religious message. So look for more to come of this soon.

And then THE LAW, probably not programmed the same night by accident. It's a French thriller about...the legislative process. In particular, the 1975 French law that legalized abortion, and Simone Veil, the Health Minister and Holocaust survivor who shepherded it through the legislative labyrinth. Emmanuelle Devos gives a fantastic performance, and the end result is surprisingly tense, exciting, and even sexy...for a film about getting a law passed.

One film a month ago Tuesday, PLASTIC MAN: THE ARTFUL LIFE OF JERRY ROSS BARRISH. And I'm such a shmuck I didn't get this up in time to tell you there would be a retrospective of his films at the Roxie. However, this movie is still playing there, so you should stop reading this and just go see it. It's awesome. Oh, and then think about how the title both refers to his artwork in plastic and how he has changed his life so many times that he's sort of a plastic man himself. That's all I'll say.

Catching up after falling over a week moth behind. I have a whole week's worth of Jewfest films to tell you about.

Let's start with THE GO-GO BOYS: THE INSIDE STORY OF CANNON FILMS. Life is full of weird coincidences sometimes. I hadn't thought about legendary 80s (mostly) low-budget (mostly) action studio Cannon Films in years, and now I've seen two documentaries about them just a few months apart. The first one, ELECTRIC BOOGALOO: THE WILD, UNTOLD STORY OF CANNON FILMS, I saw at SFIFF, and was an exhaustive look at the studios prolific output, novel business model (quantity over quality, give the directors freedom but no money, and one big hit can sustain you for another year or two) and reasons behind its eventual failure (straying from that model.) And behind it all were two men--Menahem Goran and Yoram Globus, but ELECTRIC BOOGALOO didn't go into much detail about the men, other than that they were the Israeli brains behind it all. So THE GO-GO BOYS makes a perfect pairing, and I think I saw them in the right order--celebrate the movies first, then learn about the guys who made them. Their origins as Israeli filmmakers (starting out with Chaim Topol's SALLAH SHABATI) their relationship, their contrasting personalities that both made them huge players and eventually led to their parting ways. And this film even features interviews with both of them, before Golan sadly passed away just...wow, a year ago tomorrow (Globus, well into his 70s, is still producing films in Israel.) Pretty cool, and if there's any studio that deserved two documentaries about it in 2015, it had to be Cannon.

And then MANPOWER, a multi-layered slice-of-life of working class (sometimes illegal foreign workers) men in Israel. Focusing on Meir, a police officer with a stellar record who is put in charge of a special operation targeting foreign workers. One of those workers is a Nigerian housecleaner who works hard and stays out of trouble, but still risks deportation. Other stories intersect, and I'm sorry I didn't write this right away because I forget a lot of the details. But with sensitivity and humor it showcases the struggles of many different working class people just trying to live a little bit of a good life.