All right, I've got a backlog or 10 movies I need to write about, so let's just jump right in. First off on Saturday was "Seven and a Half", except I screwed up and arrived about 25 minutes late (I thought I had to leave by noon, not get there by noon), so really I saw about six and a quarter instead. Luckily the seven and a half refers to the episodic nature of this feature, and I have a plan to catch the episode and a half that I missed. Anyway, this was another of the Balkan features, this one from Serbia, and the seven in the title refers to the seven deadly sins. It's a series of separate episodes (although they're all tied together in the final 1/2), each dealing with a different one of the sins. Greed I missed completely, and Wrath I saw the final portion about a boxer on steroids (and a lot more) getting ready to beat the crap out of some guy. Then there was lust--an internet pedophile poses as a little girl to pick up friends, only to end up with anotherinternet pedophile. Gluttony--a couple shows up to an avant-garde art exhibit, mostly for the free food. Of course, when the art is made of really disgusting food, they just keep on eating (seriously, I was starving all day and still couldn't eat because of this segment). Pride--a man and wife on a game show for couples bicker while trying to win the big jackpot. She's pissed because she's only seen as eye candy while he's the 'genius'. Sloth--a pair of burglars have a great plan to rob an apartment on the 23rd floor...except that the elevator's broken. Envy--a couple of drunken jackasses are jealous of the nice life, wife, soon-to-be-son, and mostly the car that the owner of the cafe wear they drink owns. Actually, a very cool, funny movie about the wages of sin. I'm sorry I missed the beginning, but as I said I have a plan to see it later in the festival.

Then it was time for a little break from the movies, to see a movie star--Minnie Driver! She was receiving the Cinequest Maverick Spirit Award, and I try to take a break and see at least one of these every year. She did about an hour of onstage interview, and she was pretty cool. She has a very charming, soothing voice, that was punctuated by some very sharp, clever humor. My favorite comment was when she was on the set of "Phantom of the Opera" (she was the diva Carlotta) and she overheard someone voicing a concern to Joel Schumacher that she was too over the top, and Joel Schumacher responded, "Nobody's ever paid to see under the top!"

Okay, the it was back to the movies, for a Czech film, "Railyard Blues", an ensemble slice-of-life piece punctuated with some absolute absurdity. Ostensibly about the daily lives of workers in a railyard, it meanders through love triangles, fake deaths, and lots and lots of drinking. It was pretty good.

Then I saw the very funny "The Trouble With Romance". 4 stories all taking place at the same time in the same hotel (but in different rooms), each comically representing different types of relationships (or different stages in a relationship). "Banged" has a girl going back to a guy's hotel room to have sex, only to keep imagining her ex-boyfriend and freaking out. She ends up having a deep heart-to-heart with her own imagination. "Spice" has a longtime married couple going to a hotel room to rekindle the spark in their marriage. The wife really takes control, first with a little bondage, then inviting a girlfriend in for a threeway, even though the husband is tentative. "Dumped" is the funniest of the lot, with a guy who has planned a fantastic third anniversary with his girlfriend--taking her to the club she's always wanted to get into. The only catch is they have to go with his two stoner buddies that she hates. So dump-ilarity ensues (along with one of the funniest toilet scenes I've ever seen. A different type of dump-ilarity). And finally, "Love?" about a guy who hasn't been with a girl since he broke up with his college sweetheart two years ago, so he hires a callgirl. A very funny, very well done film, and also remarkable for it's strong female characters. Here's a pic of some of the cast and crew of "The Trouble With Romance". The guy with the mic is director Gene Rhee, and I don't remember exactly who all the rest are, except that the two women are both actresses and producers. 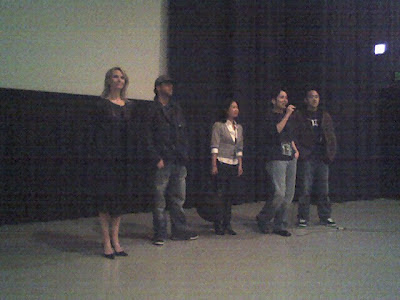 Then I saw the horror movie "Sublime". A very well done horror film, both in terms of just the raw gory element and the story. It opens with an absolutely gorgeous landscape, with the hero Tom Cavanaugh (TV's "Ed" and the recurring character of Zach Braff's older brother on "Scrubs") falling from the sky and waking up just before he hits the ground. He plays George Grieves, a middle class white guy who's just turning 40. So the day after, he goes into the hospital for his colonoscopy. However, he wakes up the next morning drenched in sweat with stitches in his abdomen. It turns out he was mistakenly scheduled for the wrong operation, and then the nightmare just gets worse. I'm debating how much to give away, because I hate spoilers but I do want to talk about it somewhat. In fact, I don't know how to talk about what makes the movie great without the spoiler. So here's your spoiler alert (highlight to read): I figured out about 45 minutes to an hour in that it's all a dream. And then for about 5-10 minutes it pissed me off because in general I hate the "it's all a dream" ending, I think it's a stupid cop-out most of the time. However, in this movie I think you're supposed to get it pretty early on. The tagline of the film is something like "What happens when your fears become real". However, because it's all in his dream, it's really a matter of what happens when all your fears become exposed--especially the ones you didn't know you had. So realizing it's all in his head eventually made the movie work for me. I guess because I got over it being a twist and got into it being an integral part of the story. End spoiler alert. I particularly liked the black nurse named "Mandingo" with the nation of Islam bow tie. It's rare for a movie to take such risks with racism these days. But in the end, once you know the twist ending, it all makes sense. There's also tons of symbolism in the movie--most noticeable is the crow representing his soul. I'm sure the movie would reward multiple viewings, so it's a good thing that it'll be out on DVD in just over a week. Which is kind of odd, because this screening was the world premier. But it was the second of three in a production deal between the producers (Raw Feed) and Warner Home Video to release these movies straight to DVD. I'm just lucky it played here first. Here's a pic of writer Erik Jendrensen and director Tony Krantz: 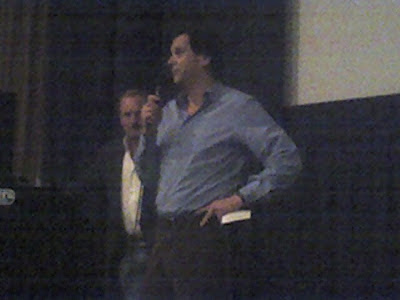 Then it was time for what is always my favorite shorts program: "Mindbenders"
"4U"--I already wrote about at Indiefest. I'll just say that watching it again knowing the twist and observing the audience was quite a treat.
"Alone and Inhuman"--Puppet poop. Yeah, I don't need to say more. It was awesome.
"Criticized"--Given that this is about a filmmaker taking his revenge on a critic who hated his movie, let me just say that this is the greatest achievement in the history of any art form ever. Seriously, it makes "Citizen Kane" look like vomit that was then re-eaten and shat out by a particularly stupid monkey.
"Filthy Food"--T. Arthur Cottam, of "Beer Goggles" and "Pornographic Apathetic" does it again. Dirty, dirty peach. Dirty banana, dirty peanut butter, dirty cookie dough, dirty cream, dirty apple juice. Starring the mouth and fingers of Annie Terrazzo, also of "Pornographic Apathetic".
"Maquina"--A psychotic bit of surgery turns a young lady into a 21st century technological update to the archetypal character of the vagina dentata. I've never wanted to be a woman so much in my life.
"Room to Breathe"--A guy's wife is always nagging him. He should really take his brother's advice and not go off his meds. Trouble is, his brother died years ago. Here we go again!
"Venom"--an old lady wages a war on insects, after a little bee sting killed her beloved kitty.
"Y Que Cumplas Muchos Mas"--Happy birthday--here's a social worker to carve up!

And here's a pic of the mindbender creators, from left to right they are (to the best of my knowledge) T. Arthur Cottam of "Filthy Food", Richard Gale of "Criticized", Leonid Mandel and Andrew Fisher of "Alone and Inhuman", and Ehren Koepf of "4U": 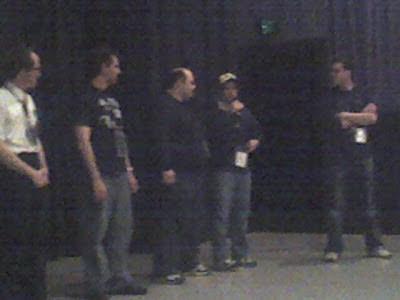 And that was day 4 of Cinequest.
Posted by puppymeat at 12:55 AM