Okay, moving (or movie-ing, ha!) right along. I got 4 hours of sleep and then back to the movies for a full day (5 movies). I'm writing this up while taking pictures of gamma rays. Here we go:

First up was a Hungarian movie, "The Prince's Respite" (or, as the subtitles said, "Princely Reprieve"), a darkly comedic, high concept, existential drama about death. Alida is a successful model and Miss Hungary, but after a fatal run-in with a mugger, she finds herself greeted by two hags in the waiting room of the afterlife, where souls wait for thousands of years to be judged. Asharoth, the prince of Hell, chooses her to play a game--she will be sent back to life and if she can convince anyone else to take over her death, she can live again. There are a couple of catches though. First, she has only one minute. Second, that same minute is repeated over and over again until she either wins or is caught by the "collectors"--three spearsmen on black horses (who hate it when Asharoth plays this game, because the dead are supposed to stay dead). Nobody has ever won this game, however nobody has ever been given a full minute before. Also, once she's back on earth, she meets another prince, Thor, who is trapped between heaven and hell. Thor likes the game and tries to help her beat Asharoth. His main advice--it's impossible to convince a stranger to die for you in just one minute, so try friends or family. Which is solid advice, trouble is it disgusts her to ask them. And, of course, no matter how well you know someone, it's not easy in to convince anyone to die in your place in just one minute. It was a really cool idea, and very well executed, although I guessed the ending quite a while before it happened. Still, it was a gratifying ending.

Next up was another Hungarian movie (I didn't plan it that way, it just happened), "Fresh Air", an extremely deadpan comedy/drama about loneliness and the glumness of going through the motions of everyday life. Viola and her daughter Angela are both pretty depressed. The movie opens with Viola at a dating service dance, and it's obvious she's tried this many times before. In her day job she's a restroom attendant and her daughter is a student hoping to break into fashion design (although she needs her best friend to enter her in a European student competition because she's too unmotivated on her own). Most of the movie is very slow and kind of hum-drum, but the charm lies in the surprising humor underneath--like how Viola keeps a cabinet full of air freshener sprays of various scents, and spends the day mixing them to find the perfect scent. Or Angela being courted by a young physics whizz (wait, in Hungary they have guys who know physics and know how to talk to girls? On a side note, when he first meets her he very very quickly tries to explain the magnetic force on a moving electron to her, and although the equations are right he missed an important point. At the end he shows her the right-hand rule for determining the direction of the force, but because the electron has negative charge the force is actually in the opposite direction, so he should've used his left hand. Sorry, that'll be the only physics interlude today). Anyway, it was a pretty good movie.

Next up was the two-man existential comedy riff "Hitler Meets Christ", based on the play by and starring Michael Moriarty ("Law and Order") as Hitler and Wyatt Page as Christ. Or perhaps they're just a couple of crazy Vancouver bums who think they're Hitler and Christ. Either way, they spend one night humorously talking/ranting/arguing about good, evil, life, death, etc. Hitler's in his own personal hell, wanting to die and be forgotten, while Jesus is in his own personal heaven, feeling so needed on earth and also enjoying Hitler's suffering. And ultimately, that's the big climactic question--can Jesus forgive Hitler? The movie was shown in black and white and evokes both the newsreels of WWII and the films of Bergman, although in the Q&A the director revealed it was shot (digitally) in color (over the course of 6 years), and some distributors are interested if it's in color. So this might eventually be released, but in a slightly different version than I saw. All in all, I thought it was a very good movie, but I can see how it might work even better as the original stage play. Michael Moriarty plays Hitler with the perfect mix of pathos and beaten down evil (his grand plans have been reduced to a few half-hearted rants), and Wyatt Page plays Christ (not at all like the icon) with soft-spoken, confident humor, like he knows a joke that nobody else gets. Here's a pic of (from left to right) co-producer Jeremy Dyson, director/co-producer Brendan Keown, and composer Hooman DePars: 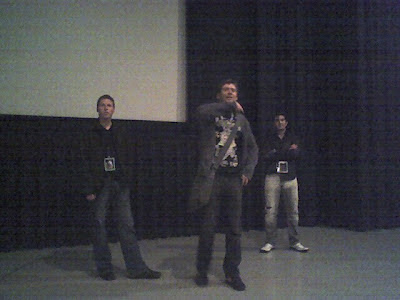 Okay, next up was "Border Post", a hilarious military comedy in the vein of "M*A*S*H" from the former Yugoslav republics (a co-production from all of them--Croatia, Serbia, Bosnia, Macedonia, and Slovenia). This is part of Cinequest's "focus on the Balkans" this year, which I'm very excited about. I mentioned to Cinequest programming director Mike Rabehl last year that Cinequest is the only place I ever see Balkan comedies, and I love their dark, absurdist, slapstick sensibility. I don't know if that had anything to do with them programming a Balkan series this year, but I like to fantasize. Anyway, "Border Post" is another perfect example of this sense of humor that I love. Basically the wacky adventures of a multi-ethnic group of soldiers manning a quiet little post on the Albanian border about 4 years before the breakup of Yugoslavia (there are news references to the rise of Milosevic throughout). The alcoholic commander, who makes their lives miserable, has an embarrassing medical condition that prevents him from coming home to his wife, and so he invents a border crisis with Albania to keep everyone up there for the three weeks it takes to treat him. Everyone, that is, except the smart-aleck rookie doctor who has to go into town to get the commander's penicillin and to check up on his (the commander's) wife (and he ends up doing a lot more than just "checking up", if you know what I mean). Things get more and more ridiculous, and the very dark ending is what really gives it the Balkan sensibility (up to that point I could see an American remake being very popular). I loved it, and I can't wait to see the rest of the Balkan movies this year.

And finally, the midnight mixed-media animation "We Are the Strange". Set in the world of a video game of the same name, with characters like "Blue", a girl who's skin turns to scales if she talks, smiles, or opens her mouth; "Emmm", a little doll boy on a quest for ice cream; "Rain", a cloaked, flamboyant monster-killer; and "Him", the pure E-vile overlord of stopmo city. For the first half, it's sort of a WTF trip, like watching the world's dumbest/craziest video game play with itself. And then eventually there's a story that takes over, in the form of giant robots battling each other. Pretty f-in' cool. Here's a pic of director/writer/voice of "Him"/everything else M. Dot Strange: 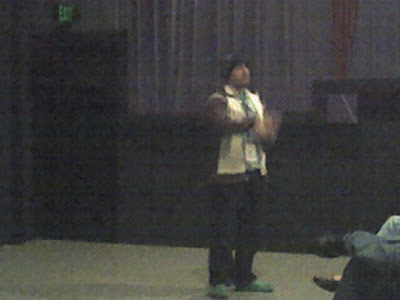 And that's it for day 3, I've got 5 more movies and a Minnie Driver interview to see today, so I'm off.
Posted by puppymeat at 2:57 AM