Or, "How Jason spent his St. Patrick's Day"

First, I want to say a few words about the festival trailer, which can be found here. It was made by the awesome creative team that made "Colma: The Musical" and is possibly my favorite festival trailer ever, even though I'll never get that damn nonsensical song out of my head. But more importantly, on opening night the audience was told there would be three trivia questions related to the trailer. Since I won't be able to make it to the closing night gala, I'm allowing any loyal reader who will be there to claim the prize. The answers are: The horse (upper right corner) falls down, loses his head, puts it back on, and hides in the background for the rest of the number. There are three (3) people in SFFD uniforms (presumably actually SFFD officers?). And the stuffed yellow duck is held by a little girl on the right side of the screen. She throws it weakly forward and then a woman (possibly her mom?) picks it up and throws it high in the air over the upper right corner of the screen. It lands with a quack! If any of you win anything by reading this, please let me know!

Okay, now on to the movies, starting with "Power of Kangwon Province", part of the retrospective of Hong Sang-soo movies the festival is putting on. I've never actually seen a Hong Sang-soo film, although I heard about "Virgin Stripped Bare By Her Bachelors" (which I'll see Wednesday night), so it's exciting for me to learn about a new director. It's a movie that requires patience, which is part of the point as it follows two nearly parallel (in that they kind of intersect, although not during the true narrative) stories of people leaving the stress of the city for a vacation in the nature parks of Kangwon Province. First there's Ji-Sook, a student on a holiday with her friends Misun and Eunkyoung. Ji-Sook is kind of a scatterbrain, or so it appears to her friends. They spend their days hiking and hanging out, and eventually she has an affair with a policeman, even though she's just gotten over a different affair. The second story is about Sangkwon, an unemployed teacher who heads out on his own Kangwon vacation with his friend. They do a little hiking during the day, but mostly they go drinking and pick up prostitutes at night, although he too, has just gotten over an affair. In fact, it was an affair with Ji-Sook, and neither knows that they're both in Kangwon to get over each other. It takes some patience to figure out, and now knowing it I believe I'd get more out of watching it a second time (which is how I justify throwing that spoiler in, it's not so much about the narrative as about the characters and the mistakes they make--and repeat--in relationships).

Next up was an appropriately titled love triangle, "Tre". Tre is a boorish, obnoxious, but clever and possibly even perceptive slacker. He's old friends with Gabe, and shows up at Gabe's place in the middle of the night drunk off his ass. His girlfriend just kicked him out, and he has nowhere else to go. So Gabe lets him crash on the couch, much to the annoyance of Gabe's girlfriend Kakela and her friend Nina, who's just left her husband and is staying in the guest room (or as Tre thinks of it--his room). Tre is immediately a force of chaos and something of a cancer in their house. And as obnoxious as he is, apparently there's something attractive about him, because he beds first Nina and then Kakela (even though Gabe proposes to her and she says yes). Some of that seems unlikely, although I paid attention to their beer preferences in an early scene where all four were out on the patio at sunset, and I predicted then based on beer preferences that Tre would get together with Kakela (although I have no idea if that was intentional). All in all, it's a pretty good anti-romance sex drama. Here's a pic of writer/actress Kimberly-Rose Wolter (Kakela), director Eric Byler, and SFIAAFF (Asianfest) Assistant Director Taro Goto (at least the back of his head): 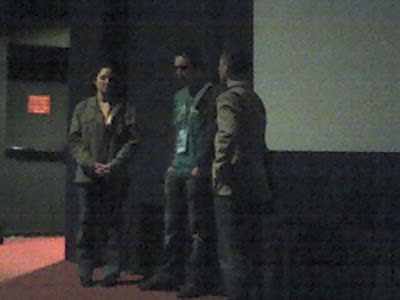 Next up was the brilliant documentary "American Zombie", by Grace Lee (of "The Grace Lee Project"). Some documentary filmmakers specialize in bizarre, fascinating subjects. Others make their name by pushing hot-button political or social topics. But Grace Lee is actually one of my favorite documentarians because she takes fairly simple (in retrospect maybe even obvious) subjects and makes great movies just on the strength of her filmmaking and storytelling abilities. For example, in "The Grace Lee Project" she used her identity as a Korean American woman as a starting point and sought out anyone else with the name Grace Lee, finding what's similar and what's remarkable about them. It's really a remarkable movie about identity, stereotypes, and rising above those stereotypes. Much the same can be said about "American Zombie". We all know zombies (the undead, revenants, decedents, the nonliving community, etc.) exist. We probably see them everyday. But have you ever actually looked past the stereotypes? The focus of this movie, for obvious reasons, is on the "high functioning" zombies (as opposed to low-functioning or feral zombies), zombies who can almost pass as human. And we meet some very interesting characters, like Joel, the leader of ZAG (Zombie Advocacy Group); or Lisa, a hippie zombie who makes representational string art and wants to know who she was before she died; or Judy, who tries to pass as human; or Ivan, who has a human girlfriend (although he loses her to his tempermental roommate Glen). And they managed to get some footage of "Live Dead", a sort of Burning Man for zombies, complete with human sacrifice (I've got a great idea for a theme camp this year!) Grace is assisted by John Solomon, a film school friend of hers who actually brought the subject to her, but unfortunately has more of a sensationalistic, confrontational take on it. Anyway, here's a picture of zombies Glen, Judy, and Lisa with director Grace Lee and co-writer Rebecca Sonnenshine: 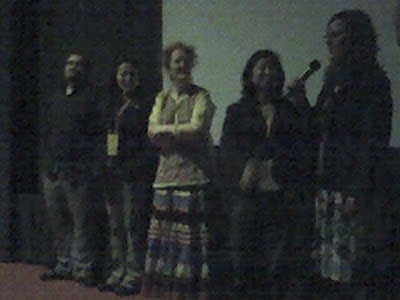 Then I ended the night with the shorts program "The End of the World as We Know It", here's the quick rundown:
"Dry Clean Only"--the key to working in a dry cleaner is never ask questions, even if the couple who come in covered in blood demand you clean their close now. On second thought, make that "especially if...."
"Ninja Apocalypse!"--Damn ninjas are everywhere! Don't get bit, or you'll turn into one. Also, beware the redneck warmonger who's taken charge of the building where you've holed up, he's kind of an asshole.
"Digitopia"--Ha ha, it has a double meaning, digital and digits as in fingers. There's also eyes and stuff and it's quite a weird little music video.
"The Chinese Connection"--Sometimes it's hard to find your own kind. Online dating can make it easier, but when there's only one Chinese family in town, it can also make it very awkward.
"The Extra Terrestrial Girl Who Is On Earth By Mistake"--Ummm...pretty self-explanatory, isn't it? Oh, she looks like an ordinary girl (and in fact was one yesterday), but look at her reflection in the mirror!
"The Celery Stalker"--This is my new favorite thing (or at least it was for a while). A bizarre little tale of lies, absurdity, and vegetables.
"Russian Hill Roulette"--Frank Yeean Chan rides his bike up the 6 steepest hills in San Francisco. It's exhausting just watching him.
"My Own Private Belly Dancer"--A nerdy scientist wants to get the girl, but is thwarted and then aided by a belly dancer only he can see.
"Equal Opportunity"--Okay, now this is my new favorite thing. An office full of people hurling offensive slurs at each other. Their boss is a cross-dressing midget in a wheelchair.
"Pandamania"--The True Hollywood Story of Tai Shan, the first Panda born in the US (on loan from the People's Republic of China).
"B.M.K. (Big Magnum Killer)"--Ironically titled, as it's really about jump-rope on the beach. And some silly music and stuff. And it's a lot of fun.

There were filmmakers in attendance, but I didn't really get a usable shot of them (which is really bad, considering some of the dark, blurry pics I have posted).

And that was day 3 of Asianfest.

Posted by puppymeat at 1:21 AM

By the way, I forgot to mention about "American Zombie". It contained some clips from zombie movies, including "Night of the Living Dead". Due to an error, this movie is actually public domain, so you don't need any permission to show it. However, Grace Lee graciously (pun intended) included a credit noting that "Night of the Living Dead" is directed by George Romero. Kudos for the classiness, Grace!