Okay, Monday has been my toughest day of the festival so far. First, I got home from work at about 7:30 am and scheduled a noon movie, so what with time to shower, eat breakfast, and get down there from Fremont, I had about 2 1/2 hours of sleep. Second, for some dumb reason I chose to see nothing but subtitled movies, many of them serious talky dramas.

Like the first movie of the day, "Awakening From the Dead", a very well made but very difficult Serbian drama. I've written before about how I like the dark, absurd, Balkan comedies. Well, this movie has the darkness and the absurdity, but none of the comedy. Instead writer and professor Miki, who on the surface has a happy home life with his wife and son, goes on a bleak journey to visit his terminally ill father, and resurrect the ghosts of the 1999 NATO bombing of Belgrade. It's use of color is striking, starting with a bright, colorful home life but quickly becoming a black and white film when he goes on his joyless pilgrimage. Even reconnecting with (and bedding) his old flame is a sorrowful act. And it only gets bleaker and more shocking at the end. Everything about this movie is very well made, and it's a powerful piece of art, but I can't say that I enjoyed it. But, of course, that's the point. Here's a pic of the star, Svetozar Cvetkovic 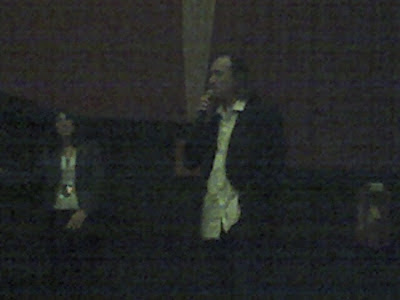 Next up was an Austrian/Swiss/German comedy, "Slumming", about a couple of rich, amoral jerks. Especially Sebastian, who has about a half dozen dates set up on the internet every day, just so he can meet the girls and take surreptitious upskirt pictures with his digital camera. He and his slightly less amoral roommate Alex go to the lower class parts of Vienna, "slumming". One night while cruising in Sebastian's BMW, they see poor, raging alcoholic poet Kallman passed out on a train station bench. They think it'd be a real hoot to kidnap him, throw him in their trunk, drop him in a train station in Znojmo (Czech Republic) and, oh yeah, steal his passport. So Kallman wakes up and he's pretty screwed, not knowing where he is or how to speak the language. Funny thing is the locals are actually friendlier than the people back home, and he might just be the first alcoholic to go to the Czech Republic and stop drinking (although it takes him a while). Meanwhile, while Kallman is finding his redemption, Sebastian (and to a lesser extent Alex, who is feeling guiltier about dumping Kallman in a foreign land with no passport) finds his comeuppance in the form of schoolteacher Pia, one of his internet dates who he ends up actually falling for--so much so that he's honest about all the nasty things he does, including dumping that drunk off in a train station in the Czech Republic. A very funny, very cool little film.

Then I saw a documentary, "The Guerilla and the Hope: Lucio Cabañas". Lucio Cabañas was a rural teacher in the Mexican state of Guerrero who became of victim of Mexico's "Dirty War" of the 60's. He was politically active as an agitator for the poor, and the documentary explains his life somewhat but is mostly just interviews of people remembering how great he was. Frankly, it was just too many talking heads and too many subtitles for how tired I was. I kinda dozed off a little in the middle, but I basically got the idea. I think this movie works better for people who already know about him and the times in which he lived, and just want to hear more about him.

Then it was off the the San Jose Rep (oddly, the first time this year I went to the Rep, seems odd that I hadn't seen a movie there before today) for an Israeli psychological thriller, "Frozen Days". Entirely (and somewhat accidentally, as the director just liked the look when he saw it with a loose cable) in black and white except for one drug-fueled bout of color, it's the story of Meow, a young woman who makes a living selling drugs (probably acid) and is pretty aimless. Her only real human connection is with her internet chat buddy 008. After a pretty tough night (a client forced her to give him a free sample, then didn't buy anything), she decides she wants to meet 008 in person. After failing a few times (he lost his keys so couldn't make a date), she goes to his apartment and learns that his real name is Alex Kaplan. However she still doesn't get to see what he looks like because the power goes out just as she enters his building, and it's too dark to see. Her quest to get to know him is thwarted further when he's injured in a suicide bombing at a club where they were trying to meet. He's wrapped in bandages and in a coma, but she has his keys. And then things get weird. She goes to his apartment, starts living there, picking up his mail, and taking care of his life. People who've never met Alex assume she's him (Alex can be a girls name, too), and gradually she starts taking over his life. It becomes a trippy exploration of personal identity. This is just one of those movies where everything was working for me. The black and white seemed pointless at first, but won me over, and the contrast with the drug scene is pretty effective (by the way, with this and "Awakening From the Dead", I saw two movies today that played with color and black and white cinematography). Even the technical glitches, due to a bad tape transfer, seemed to have a rhythm and worked with the sense of fractured reality. Or maybe I was just really tired. Who cares, I really liked the movie. Here' s a pic of the lovely lead actress, Anat Klausner: 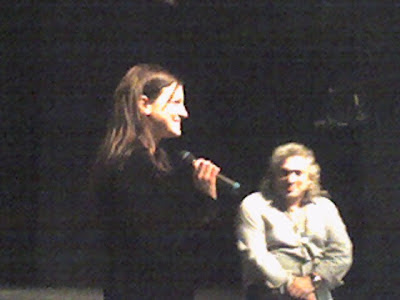 And finally it was back the California theater for a Vietnamese historical peasant epic melodrama "The White Silk Dress". "Epic" might be going to far, because it's really a story of one very poor family, set against the Vietnam war, but it treats their lives as an epic, so I'll coin the term "peasant epic". Anyway, it starts in the 1950's, near the end of French colonial rule, with a hunchback servant of the governor in love with a servant girl Dân whose cruel mistress beats her daily. With the bloody overthrow of the French, which throws everything into chaos, they are finally free to be together. Although never technically married, the hunchback gives her his only valuable possession as an engagement present--the white silk dress he was found wrapped in and abandoned as an infant. Together, the emigrate from their village in the north to the south, looking for a better life. Eventually they settle in Da Nang when she gives birth to their first (of four) daughters. They manage to scrape together a meager living selling mussels, and send their eldest two daughters (An and Corn) to school. However, once their in 6th grade, although their very smart they must have a white dress to continue school. Well, let me stop there, before I give everything away. The white silk dress is a symbol of the Vietnamese women's suffering, joy, and most of all grace. The movie works very well on so many levels, it's almost a shame to point out the things that didn't work. First, the sound felt unfinished, with long stretches of silence. Perhaps that was intentional, but I think another pass in the studio would do it good. Second--and the more I think about this I think it's not really a criticism--the ending was very abrupt. Obviously they're in Da Nang during the Vietnam war, so you know there will be tragedy, but the ending is still abrupt. But that's sort of a funny way of saying after 2 hours and 20 minutes (oh yeah, it's pretty long) I wasn't ready for it to end.

Okay, that's it so far. I'm actually completely caught up with everything I've seen so far. Time to go back to the movies!
Posted by puppymeat at 3:22 AM