Okay, first that pic I snapped of the "Stalking Santa" guys that I couldn't get from my phone yesterday (it tried to e-mail it from my phone and it wouldn't work)? I manually transferred it to my PC last night, and here it is: 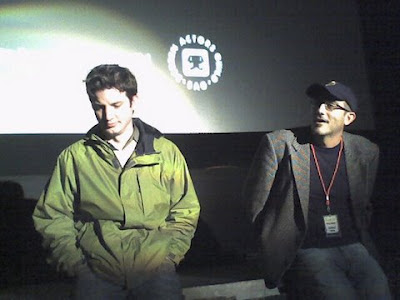 Wasn't that worth the wait?


Well, the first movie I saw last night was "The Substance of Things Hoped For", as in "Now faith is the substance of things hoped for, the evidence of things not seen." (Heb. 11:1, KJV). Here's a pic of director/co-writer Greg Morgan and co-writer Duke Addleman: 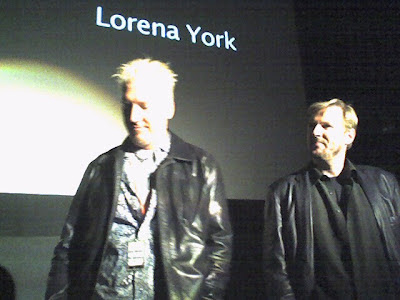 "The Substance of Things Hoped For" is an amazing movie about faith, hallucination, sanity, family, ethics, science, choice,...did I forget anything? Oh yeah, dolphins. And I could go on and on--it's a very rich movie. It's the story of Daphne (Vanessa Lengies), a young woman who in a medical double-whammy is diagnosed with a rare form of schizophrenia and told she's pregnant (although she doesn't remember anyone who could be the father). The dilemma: the drug that will cure her insanity will kill her unborn child, which she doesn't want. Furthermore, her disease may be hereditary, but to find out she must find the father she's never known (Ray Wise from "Twin Peaks", awesome as always) and get him to take a blood test. However, he's a scientist who's had an attack of religious faith, and refuses to let science--in the form of a blood test--make the vital moral decision for her. So she decides to try to deduce his sanity for herself by studying his controversial research on dolphin linguistics. And then things get weird and maybe it's all a product of her schizophrenia. Or not, it's a movie that holds up a mirror and lets your reaction tell you more about yourself than about the movie. I just have to say, I'm an athiest, but I loved this movie. I don't believe in God, but I worship great movies, and this is a great movie.

Oh, and I almost forgot about the short before it. Which would be wrong of me, because it was one of the best pairings of short and feature I can remember. "God's Little Girl" is a fantastic, religious hallucination of its own. When a baby dies suddenly in its crib, the mother's heart stops beating but she doesn't die. If when God loves someone so much he takes them to heaven early, how do you balance being good enough to get into heaven but not so good that you die young?

And then it was time for the Indiefest Valentines Day special--"Unholy Women", a trilogy of Japanese horror films. The middle one, "Hagane" (Steel) was particulary romantic.

But first, "Kata Kata" (Rattle Rattle), about a woman who while walking home late at night hears a strange rattle. She's then thumped on the head and wakes up dazed, but unharmed. Then her lover's ex-wife starts attacking her, then she (the ex-wife) turns into a monster. Then it gets weird and freaky!

"Hagane" (Steel)--This movie made me wish I could find a woman who's beautiful from the waist down but from the waist up is a burlap sack full of razor blades. Maybe I should wait by the river until one floats by. What can I say, I'm a romantic!

"Uketsugumono" (The Inheritance)--When will Japanese children learn that if you have an uncle who died at a young age, don't go poking around in the creepy shed where you might disturb his ghost. Silly kid!

Okay, and that's the end of day 7. The end's almost in sight now. Just 3 more tonight, 4 on Friday, 5 + the Crazy Go Nuts show on Saturday, 5 on Sunday, and bonus shows Monday and Tuesday. Wow, it's almost over!

Posted by puppymeat at 6:55 AM

On a totally unrelated note we watched "Cars" last night. Wow what a pile of Pixar/Disney crap. As always the CGI is out of this world, but man if it was trying to be a kids movie... Anyway, it seems like it's only purpose is to brainwash kids into thinking cars are cool otherwise it sucked pretty hard. However the "One Man Band" short on the DVD is good. Of course you have to skip through 9 thousand previews to get through it, but it is Disney so you can't get by without some child brainwashing. Excuse me I mean forced child marketing. Yes you can skip them, so that the adults aren't effected by it. Hmmm, I wonder if the 29.97 frame rate exists so subliminal messages can be encoded on the .03 part of the frame. j/k Well good thing I was able to skip those previews and not be subjected to any brainwashing... Anyway, for some odd reason I feel like I need to go buy all of the 20th anniversary Disney merchandise I can now or my life will not be complete. See you later.

baceman007...On a related note, I watched Cars recently on my projector with dolby 5.1ex surround sound cranked up. And I have to disagree with the "pile of Pixar/Disney crap" analysis. Maybe it's the incredible cgi plus great sound, but I kind of liked it. That's not to say it wasn't a trite movie, but checking your brain at the door and just immersing yourself in the experience has it's plusses. Sorry this is not a rant...I think you're supposed to rant on blogs. So, OK here it is: What the hell does our President think he's doing by ignoring the public sentimnent and the November vote. Reminds me of holier than thou people who know what's good for you regardless of how you feel. Ah, that felt better. Now I think I'll go pack for my Maui trip.

Steve, I would love to chat about your political commentary, but I think that might best be done on my blog. The "Minister of Common Sense."
baceman007.blogspot.com
I'll put a new post up. I recently signed an end the war petition myself. The problem is that we now live in a corporate republic so the president simply doesn't care about what we think, and neither do his rich, scumbag, buddies. Some of which are democrats. Anyway, let's continue this on my blog and not clog up the movie blog.
Also, I think I hated "Cars" because I hate actual cars. When I think about the fact that the twin towers would have had to have been attacked about 14 times to equal the amount of deaths attributed to cars in the US every year, and then I see a movie that makes kids think they're cool it pisses me off. Sure most collisions are avoidable, but even if 1/8 of them are not avoidable it still adds up to the same amount of deaths per year that the terrorist attack almost 6 years ago caused. Car companies are not held to high standards because that costs money and in a corporate republic big corporations don't have to do things like pay taxes and be held to reasonable standards even when lives are on the line.
My numbers are approx. 42k car deaths in the US a year and taking 1/8 of that, assuming they were not preventable, that gives us around 2.5k to 3k deaths a year.
Of course there are alternative forms of transportation, like subways, that are not as effected by weather and can run on electricity, possibly even provided from a clean, cleaner, or at least more efficient energy source, but that would but into car company profits and corporations can't have that now can they?

Hey guys. I'll comment on this more later, when I have more time. I already mentioned how I think the best animated picture nominees this year are the weakest since the category was created. I thought Cars was kinda cute, but I agree there were some at least hypocritical messages in there. Not the least of which was worshipping the past, simpler times and doing so using the most modern technology.

Good point Jason. It's kind of ironic that we use the very latest of technology to try to simulate the very simplicity of the past. But I still love watching that stuff in cranked up surround sound and giant picture. Sometimes I buy DVDs just for how I think the experience will be down in my media room.