Yeah, so now it's getting to that point in the festival where A) I really notice the themes, and B) I kinda lose my mind. The bunnies are taking over! There were at least three more bunny references last night (more on that later). I previously pointed out how "Inland Empire" and "The Third Eye" very prominently featured bunnies or bunny characters. I neglected to mention there was a fleeting bunny figurine on screen in "Neighborhood Watch". There was an Easter Bunny reference in "Stalking Santa". Yeah...it's IndieBunnyFest! I haven't seen "Aesop's Diner" yet (that's tonight), but I did have a beer with them and they pointed out there was a tiny bunny on their soundtrack CD art. The "Your Mommy Kills Animals" poster at least prominently features a bunny.

Anyway, amongst all the bunnies there were actually some movies. Starting last night with "The Shore" (which featured a stuffed bunny in a few brief scenes). It's the simple, heartbreaking story, based on a real incident, as described to director Dionysius Zervos by a lifeguard. A mother and young (~5 year old) daughter go to the beach every day. One day, the daughter disappears and is never seen again. Well, in the movie adaptation the mother Kaliope (Izabella Miko, who has amazing eyes) leaves her daughter Anna with her (Kaliope's) mother (played by Lesley Ann Warren) who loses her (Anna). And from there it's a 90 minute meditation on loss and how people get on with their lives--especially the loneliness of continuing to grieve when everyone else has gotten on with their lives (the brief scene with her ex-husband is brilliant and crushing). This movie is slow--slow to the point of testing the audience's patience, and definitely split the audience last night. I talked to people who thought it was crap and also people who thought it was one of the best things they saw in the festival. My take on it is:
A) It made me think about a lot of very interesting things. Izabella Miko gave a brilliant lead performance, and especially seeing her grief become more and more isolated (as everyone else gets on with their lives so much quicker) is fascinating. Lesley Ann Warren as the grandmother who goes a little crazy and doesn't even acknowledge that Anna is missing is also compelling, and Ben Gazzara is great as the grandfather who is practical, wants to get on with his life, but in his own quiet way is also obviously heartbroken. One thing that particularly struck me is how private Kaliope had to make her grief, only breaking down a few times in the back of her father's restaurant. I got the sense that since this took place in a tourist town, during the tourist season everyone was supposed to look happy, like this was a little spot of paradise. She grew up there, and that was instilled in her, so she can't be demonstrative about her pain.
B) It's slow to the point of being laborious. Again, many people loved it, but I thought it could've been cut down to make a very good short. A long short, say 40-50 minutes, could definitely get the point across and might stick with me better.
C) The sound and the color were off a little bit. Now I'm not an expert, I don't work in the movie industry at all (I'm a physicist in medical imaging), but I felt in some scenes it'd be hard to hear the dialogue over the ocean, and then in the same scene the dialogue would go from soft to loud. Also the picture would go from bright, almost washed out, to fine in the same scene. Now that was my unprofessional opinion, but I did confirm it with a professional afterwards. It was distracting, and perhaps another pass through post-production to make the sound and picture quality consistent would help it a lot.

So to sum up, it was an okay movie, but frustrating in how much better it could've been.

Okay, then after a quick beer with some filmmakers and fans, I was back for the "Animation Amalgamation" shorts program. Here's the rundown:
"The Waif of Persephone"--Unfortunately this one, like some of the shorts in this program, was projected overexposed, so I couldn't see it well. The shots you can see on his plog are better than anything I saw on screen. Still, I got the sense of an interesting over-cute style masking a pretty devilishly funny story about the spirit of springtime being stolen by the evil lord of the underworld and the cutesy elves petitioning the president to ransom her back...but at a terrible price. Oh yeah, and there's bunnies in it!
"Windows, Masks, & Doors"--and wheels and gears and pretty things moving and being revealed and hidden again. I couldn't tell you what the heck this was about, but I was groovin' to it the whole time.
"Kuro Kumo"--Stylish anime of a woman telling her psychiatrist about her dreams in which she's a ronin.
"Cry From the Past"--Flowing pastel scenes with a voice-over by an old woman reminiscing of her life.
"Ara's Flight"--Another movie that suffered badly from the projection issue. There's a better look at it here. A boy in an orphanage dreams of reuniting with his dead parents (killed in the Armenian genocide of 1915, although that's not specified in the film, which is meant to be more universal), so he constructs a pair of cardboard wings to fly to heaven.

And here's a pic of director Hagop Kaneboughazian: 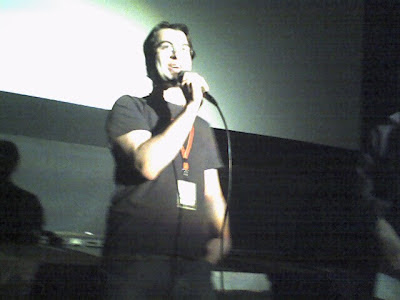 Continuing with the animation...
"Rabbit"--Oddly enough, no bunny in this one...just kidding! It uses the aesthetic of those learn-to-read books of pictures with corresponding words over it to tell a dark story of cutting open bunnies and finding crazy jam-eating idols who turn flies into jewels, feathers, and ink. Really cool!
"Gustavo"--This guy has a lot of body hair. Gross! And awesome!
"Un, Deux, Trois, Crépuscule (One, Two, Three, Dusk)"--I couldn't tell you what this is about. The only note I made on this was "layers".
"Last Dream"--Stop-motion meditation on dying. Pretty cool.

And the last show of the night was a series of shorts about interesting blue-collar jobs. First up was "Loops", a reference to the term for an 18-hole round of golf. A look at the life of caddies at a golf club, and particularly interesting were the older caddies who obviously didn't want to do this for a living but find themselves (in the words of one caddy) with no professional skills. While younger caddies look at it as a stepping stone, the older caddies are philosophical about it and find ways to maintain their dignity. And here's a pic of the director, M.R. Dhar, passing the mic to Indiefest staffer and Q&A leader Fay Dearborn: 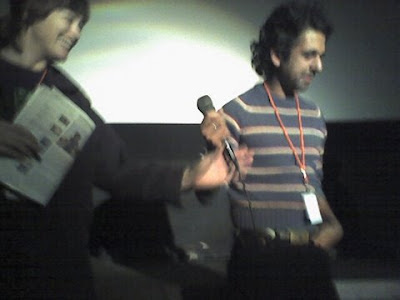 Then there was "Do You Want the Elephant Music?", a fascinating look at circus performers. It's especially interesting to see the clowns take off all their makeup and see a rather professional-looking, serious guy under there. Very cool.

And there was "Los Tabaqueros", about the art of cigar rolling. Pretty interesting, particularly how each roller has his own special technique. I imagine real connoisseurs could tell something about the roller by how the cigar comes out. Here's a pic of director Russell Griffin (with M.R. Dhar off to the side in the foreground): 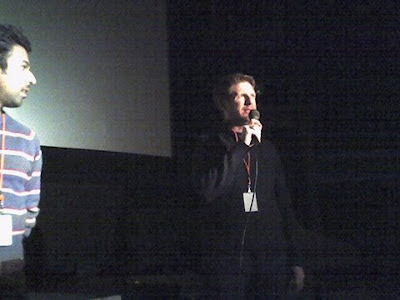 And finally, the last movie of the night was a fascinating documentary about a place where I haven't been in a long, long time--a barbershop! "Cutting Edge" specifically focuses on the barbershop as a meeting place for black youths, sort of a town hall for philosophizing, debating, joking, whatever. Very cool!

Okay, and that was it for day 8. I'm really down to the final stretch now. 4 movies tonight, 5 movies and the Crazy Go Nuts Show tomorrow, and 5 more on Sunday. Then a couple of bonus shows Monday and Tuesday. So if I don't have time to write more until it's all over, I'll see you at the movies!

Posted by puppymeat at 7:08 AM