First up was "The Hawk is Dying", starring the always excellent Paul Giamatti. He plays the owner of an auto detailing shop, but his real passion is falconry. Trouble is, he's never actually successfully trained a hawk. Training a hawk involves getting it to eat meat you offer it, and his hawks have always starved before they've been broken. Meanwhile he lives with his sister in a possibly incestuous relationship (at least, they seem to take on husband/wife roles), her son (his nephew) is autistic, and he's striking up a relationship with a drug-addicted psychology student. Basically, nothing in his life is working quite right. When his nephew drowns in his waterbed (probable but unspecified suicide, after he's left alone for the night with the psychology student girlfriend), he decides it's time one thing in his life works right, so he'll tame his newest hawk (a beautiful big redtailed) using the brute force method where he ties the hawk to his wrist and neither eats nor sleeps until the hawk eats. This is mistaken by his friends, family (who need his help with the funeral service), and most of the audience as a descent into madness. In fact, I believe he's completely sane the whole time (and he at least demonstrates to his doctor that he's fully aware of reality). The hawk represents his fears and sorrows, and the taming regiment is his determination to finally conquer them, even if it kills him. That seems pretty sane to me. Anyway, I thought it was an excellent movie.

Next up was a packed-house screening of "When the Road Bends: Gypsy Caravan", a music documentary (always an Indiefest staple) about a tour of Rom (gypsy) musicians. The gypsies have had their own diaspora, and the musicians in this film speak 11 different languages and range from northern India to Spain (interesting bit of trivia I learned--Flamenco is a gypsy dance). But one thing they've kept wherever they go is a love of music. The performances are varied and great, the backstage antics are often hilarious, and it's especially rewarding watching the musicians get to know each other and play each others music until they can do one great combined piece at the end of the tour. My only complaint could be that it's a little long. It did wear on me by the end, but then I haven't slept more than 4 hours a night in over a week. Seriously, I'm kinda surprised I can process anything more than 'Duuuh...I saw a movie and it was purty!' at this point. Anway, here's a pic of the director Jasmine Dellal: 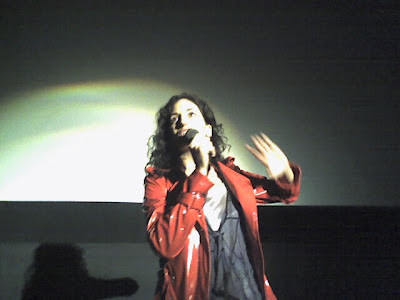 Okay, up next was a trio of films--two shorts and one feature--again having something to do with music. First was a comic short by student M. R. Dhar (who did the earlier documentary "Loops"), "Muzak", about a guy who wants to be a techno DJ and uses his mad skills to seduce a stock girl in the grocery store (I loved using the "can I buy you a drink" line in the liquor aisle.) Anyway, a good idea well written but the acting was definitely amateur. I think "Loops" was his better executed work. Here's an extra bonus pic of M. R. Dhar, this time in better light than before: 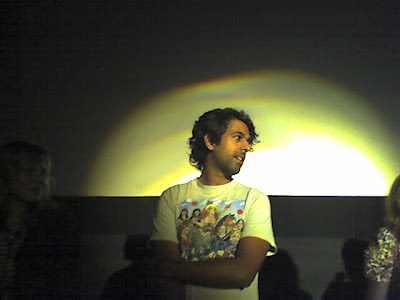 Next up was "Aesop's Diner", and in the interest of honesty and full disclosure I have to say that I was somewhat emotionally invested in liking it, since I've been drinking with director Cara O'Shea and star Royce Peterson for the past couple of days. Fortunately, the movie didn't disappoint. It's a retelling of the tortoise and the hare (bunnyfest strikes again!) with a rock band. Royce Peterson stars as Bugs (get it, as in Bugs Bunny?), who was the star of the Johnson Family Band until they broke up and he went between jail and rehab until he's broke. He meets old bandmate Shelly (a guy, short for sheldon--get it, tortoise shell?) who fills him in on the success of the rest of the band, including Shelly himself who's got a new hit single "Slow and Steady". Nicely done, and the music was cool. I was very happy to accept the free soundtrack CD. And, of course, a pic of Cara and Royce: 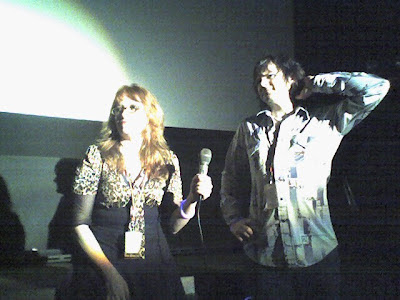 And then there was the feature, "Darkbeat: an Electro World Voyage", a documentary about the world of electronic music, featuring gobs and gobs of electro music, some pretty cool graphics and animation, and interviews about and defending electro music (I was particularly drawn to the argument that it's the only music made to appeal to the intellect and the body. Drawn to it, but I don't necessarily believe it's the only music). Personally, I must admit to liking a little electronic music, but nothing but electro for too long just gets to be too much. Fortunately, at just under an hour it was just about right for me. Here's a pic of the filmmakers. She's the director Iris B. Cegarra, and I'm sorry I don't remember his name (and he's kinda lost in the shadows, too): 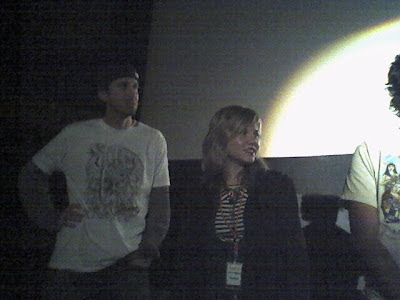 And then it was time for the midnight movie, "Gobshite", preceded by the short "Morbid Curiosity". The short explores the dark comic question, "what if every morbid little thougt in your mind came true?" If you wonder what might happen if the house painter falls off his ladder, off he goes. If you imagine your mom having an accident with the vaccuum cleaner, whoops! If you think about Jesus being crucified, you retroactively caused it. Very funny.

And finally the feature was a hilarious dark comic Irish crime story about a real English gobshite--Ronnie Banks (aka Ronnie the Rabbit, as bunnyfest strikes again!) Ronnie can't control his temper, and although he works for a crime boss called the Governor, he wants to elevate his position in the organization. So he hatches a plan to rob a rich recluse in a tiny Irish village north of Dublin. He starts by stealing the local pub, to gather information from the rich guys security chief. And of course, wacky, violent, obscenity-strewn hijinx ensue. I loved every minute of it (except for when the tape ran out with 30 minutes left and it took a couple of minutes to switch to the DVD backup and find the right spot, but that was handled efficiently and professionally by the Roxie staff. Almost had to miss part of a movie there!

Anyway, then it was quickly over to the Big Lebowski after party, only to be told at the door that it was closing. So I stood outside to wait for the filmmakers and staff to come out to see if they were up for any additional after hours party, only to be told by the doorman that they wanted to keep this part of the sidewalk clear and I should move along. So I just caught the bus home, where I'm writing this now after spending my first alcohol-free day at Indiefest since...maybe some time last year? I guess technically last Saturday I didn't have a drink until after midnight, but I went home buzzed so that doesn't count. Oh well, and that's day 9.

Posted by puppymeat at 4:40 AM

So I woke up this morning, went to the shower, I saw the words "Everything must be trained" on my hand. That's from "The Hawk is Dying", and the full line (as best I can remember), spoken by Paul Giamatti's friend at a party, is "Everything must be trained. That's why armies have generals. That's why universities have professors. That's why people have God!" Anyway, I meant to write about that last night, but I forgot. It was a great line that really stuck in my mind (but apparently not enough) and sheds new light on his struggles with the hawk. He's being God to the hawk, and in as much as the hawk represents his fears, he's being God to himself. Man, I dig that movie even more than I thought!