Let's jump right into it. I got 4 hours of sleep and I was back up to the Roxie for the documentary "Rock 'n Tokyo". Here's a pic of the director Pamela Valente: 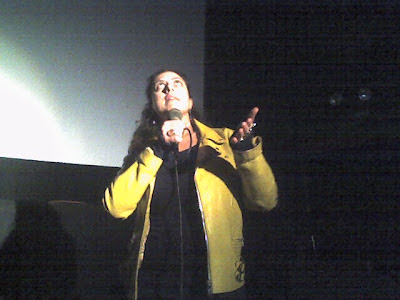 "Rock 'n Tokyo" is, as the name suggests, about Japanese rock and roll. And, as Pamela's name suggests, she's not Japanese. In fact, she speaks very little Japanese, but loves the country and the music and so moved to Japan for a while to make this movie. Mostly it's concert footage--Guitar Wolf, the 5678's, and Jet Boys (whose lead singer is quite and exhibitionist)--and some backstage hijinx and fan reactions, with very little explanation. This is probably because of her language barrier, but she explained that she was more interested in just capturing the energy of the Japanese rock scene. Personally, I could've used more explanation or story to tie it all together, but still the resulting movie was very good at what she wanted to accomplish. A good wake-up call to start me on another long day of movies.

Then there was a beautiful and funny animated Mexican-American film, "El Doctor", about a 1920's Mexican doctor with surreal patients--a guy with 100 holes shot in him from his angry wife, a girl who sprouts flowers, a guy with knotted up guts, and a woman who's a horse. But he'd rather just get drunk.

And finally, there was an Argentinian adaptation of a Charles Bukowski short story of necrophilia. "Mermaid of the River Plate" (based on "The Copulating Mermaid of Venice, CA") is a story of two drunks who steal a body bag from an ambulance and drag it home. After more drinking, they open up the bag and discover a beautiful, recently dead woman, and proceed to have the best night of their life. Ummm...gross...but funny. At least, I laughed.

So then I walked over to the Victoria to see "Dance Party USA", by Aaron Katz. Here's a picture of him: 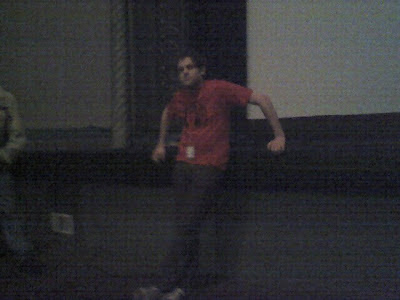 Oh, but first there was the short, "Nameless", a dark, funny story of a real scumbag picking up women at parties without even bothering to learn their names. A nice lead-in to "Dance Party USA".

"Dance Party USA" (which, by the ways, contains no dancing) is part of the new wave of American filmmaking (or video-making/movie-making, as one audience member vocally pointed out) with the likes of Joe Swanberg ("LOL") and Andrew Bujalski ("Mutual Appreciation"). The movie is inspired by conversations overheard by Aaron as he rode public transit in Portland, and it follows the lives of some Portland teenagers going to a 4th of July party that's not actually that good but there's free beer and you don't have to be 21. Gus likes to regale his friend Bill with half-truths about his sexual and drug-use exploits, and in fact opens the movie describing basically a really gross episode of statutory rape (according to Aaron, this scene is almost verbatim something he overheard). At the party, he meets Jessica who's something of an outsider and has heard rumors about Gus. The movie is a great example of the naturalistic dialogue prevalent in this new style of American movies, to the point of being almost entirely based on rather awkward conversations. And it was very well done and very engaging. Interestingly enough, when I saw one of the first examples of this new wave, Andrew Bujalski's "Funny Ha Ha", I didn't like it at all. But his follow-up "Mutual Appreciation" was excellent, and I loved "LOL" and now "Dance Party USA". I think the key is that with the realistic dialogue and characters, there's not an easy handle on the characters--they're not just simple one word archetypes, it's on the audience to pay attention and get to know the characters as if you've known them for years, because the camera has. This insight actually makes me want to go back and watch "Funny Ha Ha" again, because I think I'd get more out of it this time.

And finally there was, "Rolling", a movie who's manifesto was to realistically portray MDMA (Ecstasy) use. They had a huge cast and crew all there. Here's the director Bill Saleeby and breakout comic e-tard dork Clinton Cargile: 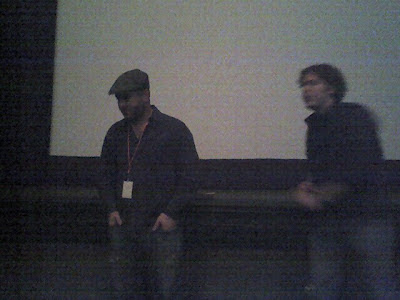 Here's a bunch more of the "Rolling" team: 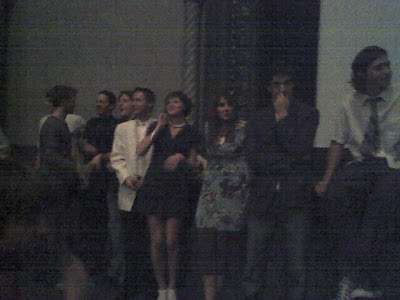 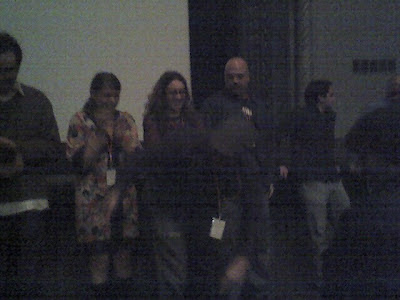 "Rolling" employs a faux-documentary style of intercutting interviews with the subjects and the narrative of one long night rolling (being high on Ecstasy) in LA. I just have to say, I love Indiefest audiences--whatever subculture a movie is about, that subculture will attend. I was watching this movie and cracking up, but at least 3/4 of the audience was cracking up at completely different scenes. A prime example, one character is explaining the nasty taste of Ecstasy, but how you know if it tastes really bad then it's really good. I thought that was an interesting piece of information, but the rest of the audience apparently thought it was a hilarious joke. Anyway, I can say that even having never taken Ecstasy, it was still a brilliant, touching, and hilarious movie with great performances all around. Why, I'd even believe that most of the cast has actually done E!

Anyway, this was actually the day that I scheduled an early night so I could go home and rest. So of course I went to the after party and drank with the "Rolling" crew for a couple of hours instead. But I still got home okay, I didn't jump around like an idiot until dawn or dehydrate, so I guess no one slipped anything into my drink.

And that was day 4 of Indiefest. Tonight I'm seeing "Desperate Measures" and "Green Minds, Metal Bats".

Posted by puppymeat at 7:42 AM