Two more movies last night, first up was the shorts program "Desperate Measures", here we go:
"The Trainee"--A guy has a really, really hard go at robbing a convenience store.
"Shank"--Teen girls, soccer, and sexy hijinx. These are a few of my favorite things.
"Musi Byt Ma (She Must Be Mine)"--Sometimes a little infidelity can be a good thing.
"The Portrait"--A Japanese man on his deathbed asks his nephew for a photograph.
"Alcatraz"--The recollections of a fat teenage girl, her overbearing mother, hypnosis, and sex.
"The One"--Dave has just met a girl and thinks it would be cool to videotape himself every day while the relationship progresses. Let's see how it goes. By the way, this won totally sucked me in and fooled me. Kudos, Dave!

Some filmmakers were in attendance. Here's Juan Reyes who made "Alcatraz" and Jenessa Joffe who made "Shank": 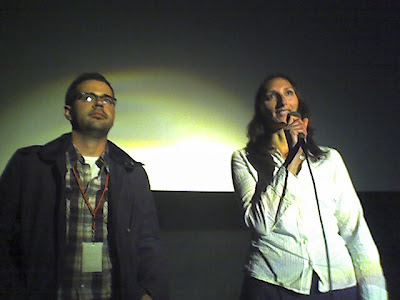 Here's Brian Emery who made "Musi Byt Ma", with Dave Laden of "The One" in the background: 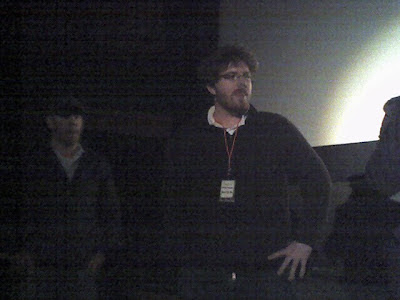 Here's Dave Laden talking about his film while Brian Emery passes him the mic. 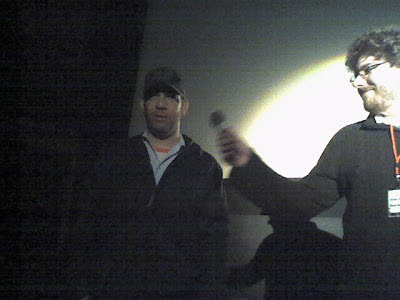 Then next up was "Green Minds, Metal Bats" from the awesome Indiefest favorite Kumakiri Kazuyoshi ("Antennae", "Kichiku Dai Enkai: The Banquet of the Beasts"). Here's a pic with him (left) and translator/subtitler/SF International Asian American Film Festival assistant director Taro Goto (the SFIAAF schedule should be online today!) 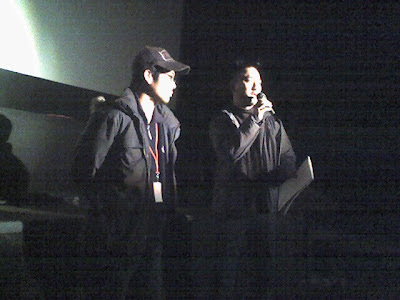 "Green Minds, Metal Bats" is a story about baseball, and losers hanging on to former glory, and the ultimate swing, and a really drunk woman, and baseball as healing, and a crazy old guy who claims to be the spirit of Babe Ruth (even though he bats righty instead of lefty), and violence and love and I laughed and laughed and loved it!

Okay, that seems like a pretty terse review, but I was trying to capture the manic, psychotic energy of this film, which is pretty impossible to do is a stupid little blog post, but this movie is awesome. Find it, watch, and if you're not afraid of Kumakiri after it, watch his other movies (because you will be afraid of him after watching "Kichiku Dai Enkai", but that's another story).

Posted by puppymeat at 7:32 AM