First up last Saturday was a double-bill of documentaries, starting with "GRA: Graffiti, Roman Art". The movie is, as the title would suggest, about graffiti artists in Rome. Unfortunately, due to technical problems they were unable to play the final 10-15 minutes of the movie, but here's some thoughts anyway: First, graffiti movies seem to be more and more popular in the independent movie scene. I've now seen several American movies about graffiti ("Bomb the System", "Quality of Life", etc.), one German movie ("Wholetrain") and now an Italian movie. Second, more than any of the other movies, "GRA" shows acceptance of the graffiti artists by the general public, even starting with a well organized graffiti art contest/festival. Third, I found it interesting how it went into the different styles of graffiti, from simple tagging up to very elaborate pieces. Also the difference between "writing" (elaborate letters most often spelling out the artists nickname) and "puppets" (figures and scenes with no writing). Yeah, it was pretty cool, although there's a lot of talking and so reading all the subtitles was tough. I'd rather be looking at the art than reading the subtitles.

Then there was "Counting Headz: South Afrika's Sistaz in Hip Hop" (and no, hip hop doesn't count as a bunny reference). The title is pretty self-explanatory, but I didn't even know that a) there was a hip hop scene in South Africa, or b) that there were women in that scene. But there are, and it's interesting how they deal with the male-dominated industry. Their music was pretty cool (for how much I know about hip hop), and the movie gave them all a chance to shine. Here's a picture of the co-director Erin Offer: 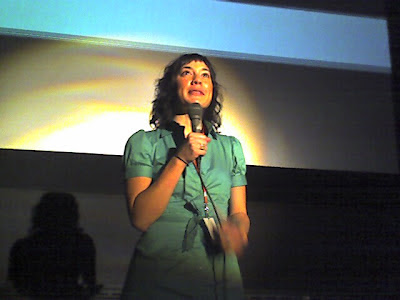 Then it was over to the Victoria for "25 Cent Preview". Oh yeah, this was the day that I was constantly back and forth between the two theaters. 6 shows (5 movies + Crazy Go Nuts) and no two consecutive shows in the same house. So I got my exercise (sorta, it's only 2 blocks between theaters). Anyway, back to "25 Cent Preview", it's a gritty, local, very real (although narrative, not documentary) story of hustlers in San Francisco's tenderloin district. The "heroes" are DotCom, the experienced black hustler and his protege Marcus, a white pretty-boy. Together they get high, they have sex for money, they get beaten up. And then things get really grim, when Marcus gets a strange message to call a certain phone number, which turns out to be a painful surprise from his past. The making-of story is just as interesting as the movie (if not more so). Merlin Gaspers, who plays Marcus, is the only real professional actor in the movie (and was producer, too). He actually hung out in the tenderloin researching the role, and once he gained the confidence of the other hustlers, he let them into the movie. Everyone in the film except Merlin are actually people they found and were into the idea. Including Dorian Brockington (DotCom), who totally stole the movie. Seriously, he was amazing. Anyway, here's a picture of the director Cyrus Amini: 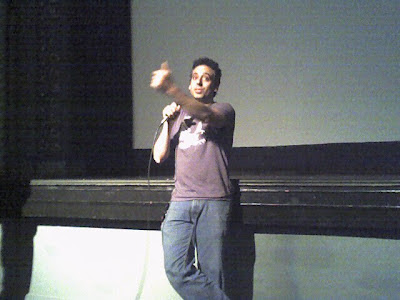 And here's a picture of some of the cast/crew (DotCom on far right): 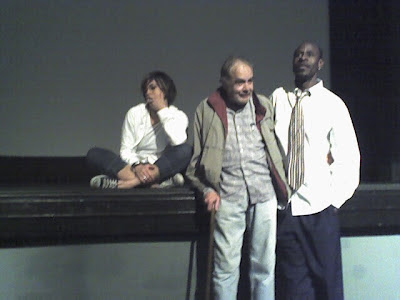 Okay, then it was back to the Roxie for an awkwardness-based musical comedy "Yellow". A story of Matt and Natalie, two lonely people in Portland who meet, fall in love, fall out of love, and sing. A few stylistic points about this movie. First, the color scheme was kinda interesting--the title card is actually just a plain yellow screen, and the only other time yellow is used in the movie is in the bedroom. Second, except during the musical numbers, nobody could really connect with each other--or with the camera. There are some very interesting choices where the camera would show conversations reflected in a window (but unheard), or just show the door behind which the important action/conversation was taking place. Also, it was actually shot on film (super 16), which by now isn't that important (digital video can do just as well), but the fact that the director Nick Peterson claimed a shooting ration of about 1.5:1 (he shot only 1.5 times the amount of film that made it into the movie. I don't know what's typical, but I know that's incredibly low. Basically nearly everything was done in one take). Pretty impressive. I do have to say the acting wasn't that great, mostly because composer Eric Schopmeyer drunkenly decided to play Matt when they couldn't find anything else (actually, Nora Ryan who played Natalie was fine). Also, although the music was passable, it wasn't particularly memorable. It really plays as dialogue (and was written in the script that way). The only somewhat memorable song is about getting drunk and/or high all night. Still, it's an impressive accomplishment, and as interesting for what doesn't work as for what does. Oh yeah, and there's a random painting of three bunny rabbits. Seriously, by this point my mind was so gone when I saw them I blurted out, "bunnies!", and everyone within earshot laughed at me. Anyway, here's a pic of Eric Schopmeyer and Nick Peterson: 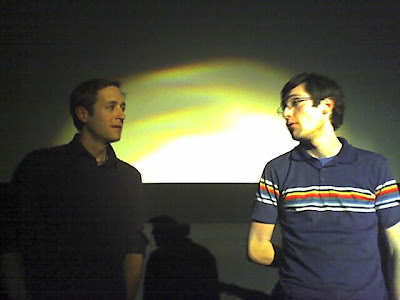 Then the hilarity continued with "The History of New America part 1: the Beach Party at the Threshold of Hell". Where to begin...in the post-apocalyptic future, Tex Kennedy--with the help of his two robots Yul and Quincy, and with the help of the dangerous but beautiful Cannibal Sue--must find Benjamin Remington, the nephew and declared heir to self-proclaimed King Remington, so he can take the throne and lead New America back to civilization (and Tex can be vice-King). In his way Mr. Jackle (actually King Remington's son, who's pissed that he wasn't named heir), his assistant Marcellus St. Joan, and his murderous band. Also in the way is Yorick, son of the devil and leader of the immortal denizens of the Threshold of Hell. And Javier Castro shows up at one point, and actually turns out to be a good guy (ironic, a Castro and a Kennedy working together). Well, to say that wacky hijinx ensue is an understatement. I can't describe it, and I also can't wait for part 2 and 3. Here's a pic of some of the cast and crew who were at the screening. Holding the mic is writer/co-director/star (Tex Kennedy) Kevin Wheatley. I'm pretty sure next to him is Jamie Bullock (Cannibal Sue), and I'm not sure who the other two guys are: 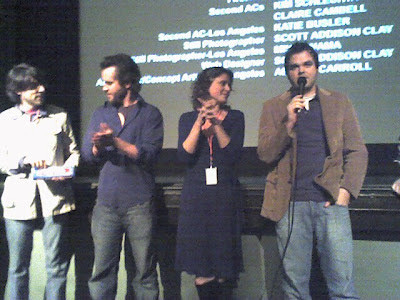 So then I was once again back at the Roxie for "Ten Canoes", a brilliant, gorgeous film in Ganadingu (Australian aboriginal language) with English narration. Australia's official submission for the best foreign Oscar (it didn't make the cut, unfortunately), it's a story of a long ago time and the time before that. It's a celebration of aboriginal life, humor, culture, and especially storytelling. It's a story within a story within a story. Ten men set out to build bark canoes and use them to hunt duck eggs. An elder noticed the youngest member of the party had been eyeing his older brother's youngest wife. So to distract him and teach him, he tells a similar story of a man who covets his brother's wife. This story is about spears and wars and fear of strangers and death, but ultimately it's a story about the virtue of patience. It's a good story--it's not your story, but it's a good story anyway.