Jason goes to a couple of bonus days of Indiefest

Okay, so in past years Indiefest would've been over for me after Sunday night. In the past few years they've added a couple "best of the fest" days, but since I'd already seen the movies, I usually wouldn't go back for them, I'd rest instead. But this year they added two movies that they found after they had set the schedule, and wanted to show anyway. So I was back for two bonus days.

First on Monday I actually started by going to the Lumiere and watching all the Oscar Nominated short films. I'll post more about that later, but thank you to the Lumiere (and the Shattuck in Berkeley and the Rafael Film Center in San Rafael) for showing them, and thank you to Magnolia pictures for releasing them.

Anyway, then I took a pleasant stroll from the Lumiere back to the Roxie for the animal rights documentary "Your Mommy Kills Animals". Guess what, it had lots of bunnies in it (in various states of cuteness and "former cuteness". Actually, if you like bunnies you should probably avoid this one). The movie is a very even-handed look at the animal rights/animal welfare movements, motivated by the fact that animal rights activists were recently named the #1 domestic terrorist threat in the U.S. (possibly that was a combination of animal rights/enviromentalists, I forget exactly). Director Curt Johnson (whose previous short documentary, "Thoth", played at Indiefest and went on to win an Academy Award) is very conscientious to let everyone have their say, to the point where even the surgeon who justifies murdering animal experimenters comes off as looking at least articulate, but misguided. In fact, the one group that comes off looking really bad is one that declined to comment--PETA, who kills about 80% of the animals they take in (their mission is in fact primarily focused on euthanasia). The title of the movie actually comes from a propoganda comic book that PETA published, which is really pretty sickening. Here's some other fascinating things I learned from this movie:

Here's a picture of Curt Johnson at the Q&A afterwards: So Monday night was supposed to be an early night. I could've gone home right then, but of course I had a few beers with the festival staff and friends. Then we left sometime after 11 pm. Thank you Tina for driving me home!

Okay, then I was back up there again Tuesday night for a night of religious movies. First was "Forgiving the Franklins". Actually, first was walking into the theater and meeting the director Jay Floyd who pointed to me and said, "You're that blogger!" Awesome, I'm becoming famous! And I know Jay will read this. Fortunately I loved his movie.

So "Forgiving the Franklins" is a hilarious send-up of right-wing religious nutjobs. The Franklins (Frank, Betty, and their children Brian and Caroline) are a good, Christian, all American family. Then one day, on the way to the church picnic, they get into a horrible car accident that leaves Caroline with an injured hip and leaves everyone else in a coma. In those comas, they all meet Jesus, in a scene worthy of inclusion in a list of the best surrealist comic scenes ever. Jesus is a tattooed Hispanic man chopping down a cross because the stupid marketing symbol reminds him of the worst day of his life. He then pulls apples out of the back of their heads, releasing them from original sin (and from shame). So when they recover from their comas, they're much more sexually liberal. Frank and Betty actually open their eyes during sex for the first time in their lives, and once that shock wears off, they get much, much kinkier. Brian comes out of the closet and has an affair with his football coach. By the way, Vince Pavia (Brian) is straight, but Khris Scaramanga (coach Caldwell) is (I'm told) a gay porn star, so the shower scene was a bit awkward for Vince. What a trooper. Of course, intolerant hijinx ensue. I've already mentioned the coma scene, which I believe is one of the most brilliant scenes I've ever seen (although the psychic communication--which was the result of it being too windy to record live sound that day, and not wanting to synch up the sound later--was a bit distracting). There's one other line from the movie that I want to relate: Betty--post-coma--is talking to her best friend Peggy Lester, who is trying to turn her back to the path of God (which, of course, Betty knows she's never left). Betty replies (and I'm sorry if I don't get this line exactly right, I'm doing this from memory), "When you talk about God, you sound like one of those women on the talk shows who still loves her husband even though he beats her." That, to me, is what the movie is all about--the difference between loving God (and therefore loving his gift of life) and fearing God.

Here's a picture of director Jay Floyd at the Q&A: 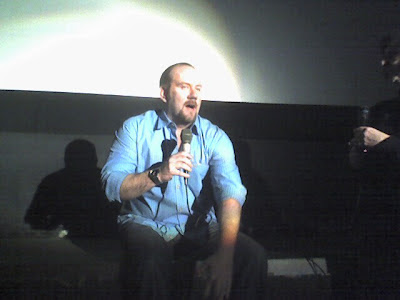 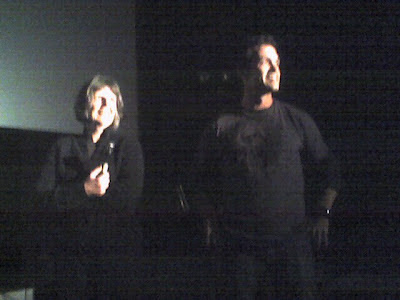 And then I stuck around for a second screening of "Dante's Inferno", which I had convinced a few friends to see. That movie's still awesome (and keeps with the religious theme of the night). Then a few more beers with filmmakers and Indiefest staff. And then it was really, really over.

Okay, I might have one more Indiefest post coming up, summarizing the themes, my favorites, and my new experience of blogging Indiefest.