The team at SF Indiefest has gone a little nuts with their biggest festival ever. It goes for three weeks, and it all started last night.

The opening night gala was Abel Ferrara's ode to New York's famous Chelsea Hotel, "Chelsea on the Rocks". Interesting trivia, Ferrara was originally supposed to be just one interview subject in the movie (as he's lived part time at the Chelsea), but he sort of took the project over. It starts with interviews of some of the eclectic personalities that live there--full time or part time. Some are famous like Dennis Hopper, Ethan Hawke, Milos Forman, or Robert Crumb. Some are unknowns, anonymous old ladies, drug dealers, painters, musicians, philosophers. Some are "archival footage" (at least, that's how they're credited, although it's really re-enactments) or Jerry Garcia, Andy Warhol, Sid Vicious, Nancy Spungen (Sid's girlfriend who died at the Chelsea--allegedly murdered by Sid), Janis Joplin, etc. None of them are introduced, and there's no words on screen identifying them--you either know who they are or it's not that important. But the one guy you have to learn about is Stanley Bard. For decades he's run the Chelsea, and run it his way. If he liked you, you were family. If he hated you (and allegedly, he hated Ferrara) it was a different story. But he did it his way, and created a sort of haven for...anything, I guess. The important thing--which if you (like me) didn't know you learn halfway through the movie--is that he's selling the Chelsea, it's the end of an era, and many of the longtime artist residents won't be able to live there anymore (for example, if you were family you didn't have to sign a lease, but that lease would be damn handy now). The chaos and turbulence of the moment (in the lives of people who can already run on the pretty chaotic and turbulent side of the spectrum) is the emotional heart of the movie, making the memories of past Chelsea residents (Mark Twain, Arthur Miller) all the more poignant. It's strange, I'm left with a feeling of nostalgia for a place I've never been.

Anyway, Abel couldn't (or just didn't) make it out for the screening, but producers Jen Gatien and David Wasserman were there for a Q&A: 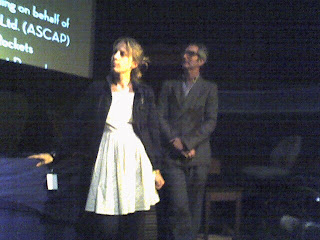 Next up was the co-opening night film, "Kassim, the Dream". It's a remarkably narrative documentary about the life of and career of boxer Kassim Ouma. Born in war-torn Uganda, at a age 6, Kassim was kidnapped by rebels and forced to become a child soldier. Memories of those killings still haunt him. After the rebels seized power, he became an official army soldier, and learned to box in the army barracks. He took to it quickly, and became a champion in the army leagues, still as a teenager. The Ugandan team got visas to go to the U.S. for an international military boxing tournament, and he promptly deserted and defected to the U.S. He spoke nearly no English, but found a boxing gym, made friends, and worked his way up to Junior Middleweight Champion of the World (the film opens on his title-winning fight). He's now a brash, young American success story, who fights hard and parties equally hard (which causes him to lose at least one fight). But he still fights under both the American and Ugandan flags, and at age 27, he gets a visa to return to Uganda, get an official military discharge (so he's no longer wanted for desertion, which is a capital crime), and tour the country as a sports hero. There are new rebels fighting the current government, in a state of perpetual war with a new generation of child soldiers (although there happens to be a cease-fire during his visit). Suddenly, the brash, cocky American success story is an emotionally wrecked African boy, as he relives too much of his trauma through the new generation. A village that performs a memorial play of an attack is too much for him. And visiting his father's grave he collapses into a puddle of tears (his father was executed by the government after his desertion, and Kassim obviously blames himself). A very good, well told, and emotionally powerful movie.

Posted by puppymeat at 9:59 AM

Kassim's story is very powerful and he is a major advocate of the annual Guluwalk which raises money for children of Northern Uganda. I work with Survivor Corps who unites survivors of war and it is inspiring to see stories like Kassim the Dream hit the mainstream and raise awareness to an American audience.