First up I started with a retro screening of "Colossus: The Forbin Project". I love it when festivals play classic/retro films, and Dead Channels does that more than anyone (at least, when it comes to retro cult films). I have to make a little confession--I did not grow up as a movie geek. I'm from a large family (I'm the second of six kids), and we tended to do stuff as a family, so dragging the whole brood to the movies was a rare (and expensive) treat. As a result, I have huge, odd gaps in my movie knowledge. I wasn't the kid running off alone watching movies that I was way too young to see. I didn't even see many horror films until I was in college. So Dead Channels is great at filling in my missing movie knowledge (can't wait for "Cut-Throats Nine" on Tuesday)

With that said, even if I were the kid running off to see movies on my own, I was negative 4 years old when "Colossus" was released, so I probably wouldn't have seen it anyway. My loss, although I get the treat of discovering it much later in life. Like...last night. It's the original supercomputer runs amok movie, and while the technology hasn't dated well (computer = blinking lights and grating metallic voice) the message is still dead on--don't hand over control to an ultimate authority. Dr. Forbin leads a team that created Colossus, an enormous supercomputer capable of instantly analyzing all intelligence data, determining the likelihood of an attack, and responding appropriately (Colossus is tied in to our nukes). Colossus turns out to be even smarter than they thought it would be. For example, shortly after they power it up, it discovers Guardian--its Soviet counterpart. Colossus and Guardian start communicating, and decide that humans are ultimately warlike creatures who can't govern themselves. Since they're programmed to prevent war, the best solution is to take control away from humans--even if that means a few little shows of force (nuke a few cities for the good of the world). Forbin and his team desperately try to find a way to stop Colossus--which of course they built to be indestructible. Colossus looks for ways to gain more control, expanding his dominion from the US and USSR to the entire world. Awesome, scary shit, which as I said still holds up well today.

Next up was the short, "Mr. Video". Due to format (PAL vs. NTSC) issues, this didn't play in the short film program Saturday, but will play tonight (Monday) at the 10 pm show. And this was a little bonus screening to make up for missing it Saturday. Anyway, it's a cool, funny short about the video rental business, how pirates are destroying it, and what to do about it. Whatever you do, don't bootleg movies! I can't freakin' stress this enough.

Then the feature, "Who Is K. K. Downey?" I actually saw this at Cinequest, and here's what I wrote at the time:

"Who is K. K. Downey?" Inspired by the JT Leroy hoax, Terrance and Theo play in a crappy, crappy band. Theo has written a scathing novel, "Truck Stop Hustler", but can't get it published because he's a privileged suburban white boy, not a smack-addicted child prostitute. By the way, the 8th birthday party scene in the book is hilarious, disturbing, and I'm counting it as part of the festival's birthday theme [Jason's note: Cinequest had a birthday theme going on this year]. Terrance gets the brilliant idea [Jason's note: I think I got that wrong, it was Theo's idea, but now I'm confused] that if they need a real truck stop hustler to sell "Truck Stop Hustler", he'll pretend to be one. The novel becomes K. K. Downey's autobiography, Terrance becomes Downey, and the book and Downey become the coolest thing to hit the Montreal club scene in...forever! Which totally pisses off Terrance's ex-girlfriend's new boyfriend, Connor Rooney (not Connerooni, Connor...Rooney). Basically, a hilarious excuse to skewer the hipster paradigm while throwing out as many descriptions of crude, demeaning behavior as possible. I loved it.

Yeah, I'll stick by that, and add that seeing it again it was even funnier than I remembered. I'll also note that I saw "The Heart is Deceitful Above All Things" (based on the J. T. Leroy book) when it opened Indiefest a couple of years back--before everyone learned that J. T. Leroy was a hoax. Bruce Fletcher, the founder of Dead Channels, was the Indiefest programmer who played "The Heart is Deceitful Above All Things". So this was a sort of inside joke/homage to getting swept up in that hoax.

Next up was one of the most puzzling movies of the festival, Nicolas Roeg's "Puffball". I think I had an ever harder time reacting to this than I did to "Reality Bleed-Through" (which in retrospect was easier to understand than it seemed at the time). But there's a mini-theme running through the festival--whenever I don't know exactly what to make of a movie, they totally transfix me. I may be confused, but I'm sure as hell not bored. Liffey moves to a remote village in Ireland with her boyfriend. She's an architect, and she's rebuilding an old cottage to be their dream home. They make love over a mysterious stone with a hole in the center, and she gets pregnant. This attracts the attention of an odd family--Mabs, a mother of three (who wants a fourth--a son), her reclusive daughter Audrey, and her mother Molly who's a witch. Mabs and Molly are especially interested in the unborn child, who they believe is actually Mabs (they were casting spells to increase her fertility, and they believe she stole their magic, or something like that). They work to curse Liffey, steal her child, etc. Strange goings on, old gods exerting control. A weird universe with just a hint of the supernatural (or not, depends how you read it). As I said, I don't know what to make of it, but I was transfixed. I should watch more Nicolas Roeg movies, then maybe it'll make sense (or not).

And finally, the night ended with the world premiere of "A Gothic Tale" by Justin Paul Ritter, the baby-faced psycho who previously brought "Katiebird: Certified Crazy Person" to town. This movie is a wild, emotional ride, a mash-up inspired by three classic gothic stories ("The Tell-Tale Heart" by Edgar Allan Poe, "Heidegger's Experiment" by Nathaniel Hawthorne, and "Markheim" by Robert Louis Stevenson), all narrated by Rowdy Roddy Piper as a homeless man. Mark Heim is a former criminal, in love with Lillian Heidegger. Her father, Thomas, doesn't approve, but is busy with his own experiments in turning back the ravages of time. The Stranger (Ryan McGivern) shows up to offer choices--horrible choices along the lines of "let this person die or let this other person die". It's a screaming nightmare about choices and how they torture you and the ones you love. Okay, I'm going to stop right now because I think that's the best way to sum up the movie. Here's Justin Paul Ritter and Ryan McGivern at the Q&A after the movie: 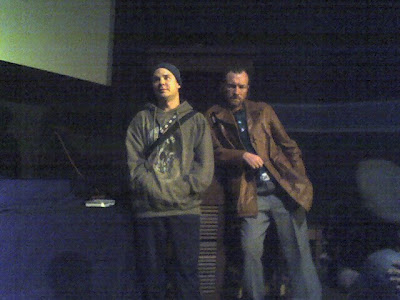 Unfortunately, I had to run to catch BART home, so I didn't get the chance to do more than shake Justin's hand and tell him well done. But it plays again tonight at 6 pm, so all my local readers should catch it if you have the chance.
Posted by puppymeat at 7:44 AM