First up was "The Bird's Nest: Herzog and De Meuron in China", a documentary about the Swiss architect team who built the iconic Bird's Nest stadium for the Beijing Olympics. Jacques Herzog and Pierre de Meuron are famous architects in Switzerland. One of their recent big projects was a stadium--the stadium in Munich built for the 2006 World Cup (I've been there--but not inside--and it's a cool looking stadium). They were one of several teams bidding on the contract to build the main stadium for the Beijing Olympics, and of course they were the winners. The movies an interesting look at the process, which starts with them talking about how they've lost contracts in foreign countries before by not understanding the local culture. So they teamed with Chinese artists, ambassadors, etc. to really understand what would work well there. It's interesting that they didn't actually have a bird's nest in mind at first, they just wanted a chaotic structure on the outside moving to order on the inside. It was the press who dubbed it the Bird's Nest (and the press loved the design, which is largely responsible for it getting chosen). The movie bogs down somewhat as it gets to the budget details and minutiae of construction, although it's still interesting seeing how the grand design was actually pared down from an even grander design (e.g., it was originally going to have the largest retractable roof in the world, but in the end it just became an open-air stadium). But the most interesting character is Ai Weiwei. He's a Chinese artist and architect, and was their main partner on the project. He's actually a subversive artist, and they showed one of his works was a series of pictures of his middle finger (I believe shot against a green screen) aimed at various landmarks around the world (he's flipping of the Eiffel Tower, the Empire State Building, etc.) He talks about how he doesn't give a damn about the Olympics, because it's just a bunch of nationalism, which he hates. Unfortunately, he's barely on screen. This was a moderately interesting movie, but there were hints of a much, much more interesting story, about the subversive, anti-nationalist artist who helps create a grand, enduring monument of national pride. I know this movie was Herzog and de Meuron in China, but someone please make a movie about Ai Weiwei and the Bird's Nest. That's the story I want to know.

Then I made a last-minute change of plans to see "Neshoba" (originally, I planned to see it on Saturday, Nov. 1, but that will semi-conflict with a wine tasting event. Now I'll either see "Chasing the Devil" on Nov. 1 at 5, or get really drunk and miss it altogether). And I was so glad I saw it, because "Neshoba" is a great film. The title refers to a county in Mississippi, a rural area that saw quite a lot of violence during the civil rights period of the 60's and 70's. One of the most famous murders in the region was committed over 40 years ago. In 1964 the three civil rights workers were brutally murdered by the KKK and buried in an earthen dam (by the way, the reason this case is famous is because two of them were white, dozens, if not hundreds of black people were murdered and practically forgotten). At the time, the state didn't pursue murder charges. The federal government pursued a civil rights case, and some of the conspirators spent a few years in prison. But the ringleader, the Rev. Edgar Ray Killen, walked free because one juror refused to convict a preacher. In 2005, 40+ years later, the state AG is pushing to finally bring murder charges against the surviving conspirators. This documentary follows the case, the people involved, and the impact bringing up old wounds has on the community. Many people want the past to remain the past. I can understand them, it's a painful process. Many want justice, finally, not just for the victims but as a cleansing of the sins of the community. Some of the stories of people dragging themselves out from a lifetime and culture of racism are truly inspiring and a cause for hope. I'm gratified to see so many people who want the right thing done. And finally, there are still unrepentant racists, including Edgar Ray Killen, who believe there never was a crime and those trouble-makers got what they deserved. Although it's distressing to see, the most fascinating part of the movie is the unfettered access they got to Killen, and some of the vile things that come from his mouth. Without him, the movie would be much less interesting, but without him the world would be much better. I normally don't give out spoilers, but since the information is free and easy to find, Killen is eventually convicted of 3 counts of manslaughter (not murder), and sentenced to 3 consecutive 20 year terms in prison (i.e., a life sentence for a man of his age). A well made, powerful movie. 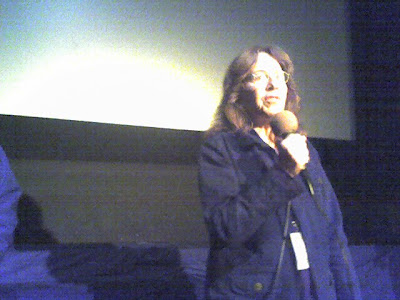 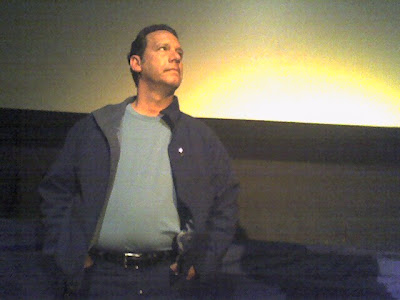 So from chasing down one monster who escaped the authorities for decades, we moved on to another, a much funnier look at "Bigfoot: Beast on the Run". Okay, I grew up in the Pacific Northwest (Bellingham, WA!) where Bigfoot/Sasquatch legends were taught in grade school, from the perspective that he probably exists (or at least he might). I became a little more incredulous later on, but he's still a fun legend, probably one I want to believe in more than space aliens or God. But I'll spoil this right now--the filmmakers did not find him (or did they? No, they didn't.) What they did find was an odd collection of weirdos who search for him. Frankly, if these people were hunting me, I'd stay as hidden as possible, too. Actually, in fairness there are some interesting people, who range from serious to ridiculous. On the serious side, there's the scientists who talk about footprints, bone structure in the foot, and the metatarsal ridge. Equally serious, but a bit on the strange side is a mysterious audio recording. Then there's the crazy rednecks tearing through the woods on ATVs swearing they'll catch Bigfoot (who won't hear them coming?) or the guy trying to lure Bigfoot into his backyard and trap him, or the guy who photographed a mysterious glowing "Bigfoot orb". Yeah, this movie isn't about Bigfoot, it's about the nuts who hunt him. And it's pretty hilarious.

Next up was a beautifully shot, fascinating, but excruciatingly tedious documentary, "Dust".  I missed this one at SF International, but lucky me I got a second chance at 90 minutes of teeny tiny particles.  I'll grant that it's surprisingly fascinating for a movie entirely about dust.  The eccentric artist who collects bits of dust fluff is weird.  Mixing paint starting with pigment dust is interesting.  Scientists talking about it's harmful effects or the creation of the universe, that's cool.  The illnesses from dust inhalation after 9/11 is an odd look at a terrible tragedy.  There are individual moments that are fascinating, but it just doesn't hold together for the whole thing.  I think it could work very well broken up into a series of vignettes on dust.  Give me 5 minutes on paint dust.  5 minutes on artistic dust.  5 minutes on 9/11 dust.  Ironically enough, "Dust" would work better broken into smaller pieces, instead of one big chunk.

And finally, the night ended with the flaming fashion documentary, "Eleven Minutes".  I've never seen "Project Runway", but the first season's winner is an outrageous guy named Jay McCarrol.  It's been a couple of years, and despite winning he's never had his own fashion show.  Until now--he's booked a tent at New York's Fashion Week in the fall.  This documentary follows him for nearly a year leading up to the show.  I couldn't give a crap about fashion, but for what it's worth his show was called "Transport", and it was inspired by some art movement that featured a lot of hot air balloons.  It was also sponsored by the Humane Society, who applauded him for being a no-fur designer.  So fashionistas might be interested in the clothes, I was left with just the characters, and of course it starts and ends with Jay.  He's outrageous, flaming, and often more annoying than funny.  But he makes me laugh a lot (especially when he jokes about doing a show based entirely on diarrhea and vaginal discharge).  As it gets closer and things are running into a deadline (e.g., the shoes don't show up until the day of the show), I can't really get into the panic he feels, because after all, it's just an 11 minute show (hence the title) featuring ridiculous clothes I'd never wear.  But it made me laugh many times, so even if I didn't care, it was still a good time.
Posted by puppymeat at 5:40 PM