This was the longest day of the festival, with six programs. And while Friday was the exploitation day, Saturday was the art house/extreme weirdness day.

The art started with "Golgotha", a comic homage to German expressionist silent films. Golgotha is an old sorceress and scourge of mankind. She's killed all her guards, all that's left is her loyal goblin Minion (who is awesome, I want a goblin minion of my own!) Tired, old, and bitter she relates her life story to Minion. While the scenes of her talking to Minion are in sound, the flashbacks are silent--mostly, they play around with sound and silence. Oh yeah, and the music is cool, too. Anyway, her life story--she was the daughter of Victor the Vicar and his wife. They were murdered by the evil king MacGuffin, who takes her and raises her as a princess. But she grows up with revenge on her mind, learns magic, and eventually gets her revenge of MacGuffin, and on Prince Debonere. But her hatred, revenge and cruelty leaves her alone with nothing but her loyal goblin. But really, from the opening title cards on (through the cheesy dragon puppet) this movie is all about the fantastic comic twist on Germen expressionism (think the films of Murnau through a more intentionally comic sensibility). And here's the lovely director/writer/producer/editor/everything-er who made this, Karla Jean Davis: 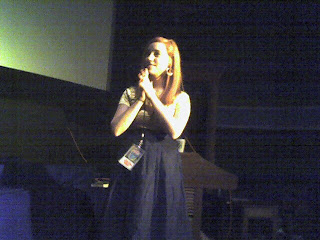 For anyone who likes to see the bad guys win, "Golgotha" plays again on Wednesday, October 8th at 6 pm.

Next up was the program of Fantastic Short Films. This plays again on Monday night at 10 pm, and hopefully by that time they'll have a workable copy of "Mr. Video" (PAL vs. NTSC issues). But even if they don't, I'd recommend seeing this series. Here's the quick rundown:
"Auga (Water)"--A Spanish film about car thieves and a car with the world's best anti-theft device (drowning)
"Foet"--As in a shortened form of the archaic spelling of foetus. Abortion meets the world of high fashion, with a new, ultra-pricey form of leather. Awesome
"The Horribly Slow Murderer With the Extremely Inefficient Weapon"--Richard Gale terrorized the world last year with a paperclip in "Criticized". Now he's back with ordinary object horror in this trailer for a 9-hour epic (seriously, the trailer alone is 10 minutes long). Absolutely hilarious, but you'll have to watch to see what the weapon is. Now I look around at everything and think 'How could I kill someone with this?'
"Mina"--Little girls are so hard to control. Even for vampire families.
"Ending Eternal"--Speaking of vampires, when you've lived for 500 years sometimes you just want to end it all. But good help is so hard to find. C'mon, this apartment is full of wooden objects and you're going to try to shoot me with a gun?!
"Dead Bones"--Ken Foree (original "Dawn of the Dead") produced and stars in this cannibal western (with a cameo by the typecast Ruggero Deodato) about a bounty hunter, a criminal, and a gory little half-abandoned town. Awesome.

Here's a picture of Richard Gale ("The Horribly Slow Murderer With the Extremely Inefficient Weapon") and Justin McConnell "Ending Eternal". By the way, I don't want to jinx anything but Richard Gale claims he's very close to being able to start his feature-length version of "Criticized" soon and Justin McConnell is working on his feature length "Eternal" (the sequel to "Ending Eternal"). 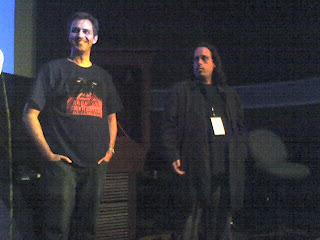 So next up was probably the artsiest film (and the one that made me say "What the fuck?" the most), "Reality Bleed-Through". As an intro, co-producer/co-writer Matt Boland explained that lead writer and director Jimmy Creamer hates everything (especially religion and government, but also rainbows and kitty-cats and anything living) and that sensibility infuses the film. In a bleak future, plague-ravaged world, the sun melts people (but apparently not other living things like trees). Ethan hallucinates and believes (due to a government experiment) that staring into TV static will give him messages that will make the world make sense. A cult called Sister Salvation worships the sun in the form of a God named Shylipis (anagram of syphilis?) A guy who's trying to fix the broken water system catches his wife in bed with his best friend and kills him. Everyone flees to Ethan's house (including a woman and her brother who's dying of the plague) before the sun rises. Ethan hallucinates, psycho guy kills his wife, Ethan believes he's God, starts killing/saving everyone. Yeah, I'll stick with my original response, "What the fuck!?" But I have to say, there's also a lot to recommend this film. There are some scenes of true beauty, and I've seen movies that are more difficult to comprehend. I have a hunch this would reward multiple viewings. You just have to be a little bit of a sick, misanthropic bastard to want to watch this movie again. I can't wait for it to come out on DVD. Here's co-producer/co-writer Matt Boland, who swears he's not as hateful as Jimmy Creamer: 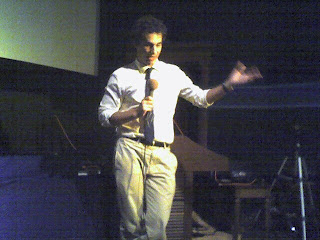 Next up was a Philip K. Dick inspired short, "Peekers". People are trying to get you to play hide and seek. Which is odd enough when they're adults. It's odder still when you just got off the phone with them and know they're actually in Cleveland.

This actually introduces the first far-reaching theme I've noticed in the festival--obscured faces. I've noted them in "Latchkey's Lament", "From Inside", "Bad Biology", "Gutterballs", "Reality Bleed-Through", and "Peekers".

And the theme continues with "Plague Town". A family (well, a father, his two feuding daughters, and his new wife) are in Ireland to connect to his roots and re-connect as a family. They miss the last bus back to civilization, and very quickly it's obvious we're in a lost-in-the-woods slasher flick. While the setup is pretty standard, the execution is spot-on, as this film becomes a nasty little beast. They're attacked by genetic freak children (who cover up their faces with masks--theme!) You know, just giving a plot summary doesn't do it justice, because it makes it seem like a redundant, "seen it before" movie. But I swear, it just works. Maybe you've seen it before, but you haven't seen it done this well very often. Just look at the freakin' poster and you'll get an idea of the great look and feel of the film. I suppose if I could nit-pick on one thing, it was very dark. And I don't mean in tone, it was too dark on the screen to see everything that was happening, but I'm willing to bet that was an issue with the projection, not with how the film was shot. Here's director (and long time horror producer and documentarian, making his feature debut) David Gregory with his leading lady Erica Rhodes: 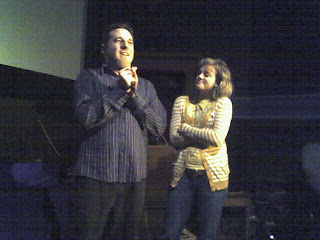 Next up was "Tokyo Gore Police", the outrageous Japanese splatter-comedy which I saw at Hole in the Head. Here's what I wrote back then:

"Tokyo Gore Police" [was made] by the same guys (Tokyo Shock) who made "Machine Girl". This one is possibly bloodier and definitely much more fucked up (and yes, that's possible). In the future, the Tokyo police force is privatized. The heroine is a
bad-ass cop, daughter of a cop who she witnessed murdered in a shocking opening. That's left her with a bit of a wrist-slashing habit, but she's also trained to be the baddest killer on the force. Her target--engineers. Not nerds who build stuff, not train drivers, but genetically altered freaks whose wounds turn into weapons unless you find the key-shaped tumor inside them and destroy it. Engineers are usually mindless adrenaline freaks, but the force is facing one that calm and meticulous in cutting up his victims. Worse yet, he implants a key tumor into the heroine, making her an engineer!

The look of the film owes an equal debt to "Blade Runner" and "Robo-Cop", and like the latter breaks the tension with hilarious mock commercials, both anti-suicide PSA's and pro-cutting cutesy fashion knives (WTF?)

This was already nearly the weirdest thing I'd ever seen. Then they got to the underground genetic modification fetish club--prostitutes with penis noses, protruding eyeballs, snail shells, and a flesh chair that gives the crowd a golden shower. Yep, this
is the weirdest fucking thing I've ever seen that still made linear story sense.

Yeah, I'll stick by that review. Especially the last line. I also have to note something interesting about this day's film. While Friday featured exploitation with massive loads of nudity, Saturday was almost completely nudity free. In fact, the only nudity was freak genetic altered nudity (like a giant penis gun--killer cocks are are a recurring multi-year theme at Dead Channels), special effects instead of real people. So I'm not sure if it counts. After an explicit Friday, Saturday was practically nudity-free. Interesting, I wonder what Sunday will bring.

And then, the vintage documentary/scare film, "Weird World of LSD". Or actually, is this really a "drug scare" film, since it made LSD seem pretty cool (oh no, she took LSD and now strips down to her underwear in public! Her boyfriend must be furious!). Come to think of it, I'm not sure if it counts as a documentary, either. It does count as a "What the Fuck" experience. 1950's/60's (it was made in 1967, but looks more like the 50's) people drop acid and freak out. Some of them never stop hallucinating! What-the-freak-ever. Maybe it's better to watch on LSD. It certainly doesn't make much of a case that LSD is bad.

And that was Saturday at Dead Channels.