5 movies last Saturday, a sort of movie marathon.  Which, appropriately enough, started with "Spirit of the Marathon", a documentary about the vast array of marathon runners.  Runners range from old men taking it slow, to first timers, to elite runners who are in it to win the prize money.  It raises an interesting thought, is there any other athletic event where amateurs run the same course, at the same time (but for much longer) than the champions?  Probably, but I can't think of one.  A marathon is the ideal test of human endurance--long enough so that it isn't easy for anyone, but possible for almost anyone willing to put the time and effort in to train for it.  Hell, even as out of shape as I am, I feel I could run a marathon.  I'd just have to stop watching movies for a while so I'd have time to train...so there's no fucking way that's happening.  Anyway, the movie itself is very entertaining, especially considering that out of necessity it has to show people running for the majority of its (no pun intended) running time.  They get some great shots (the sweeping crane shot of the start of the Chicago marathon is breathtaking), and they do a good job of mixing the personal stories (elite runners trying to finally win one, novices just trying to finish, the intermediate guy trying to break 3:11:00 and qualify for the Boston marathon) with historical anecdotes.  It goes over the historical battle of Marathon, and shows how the first competitive marathon started with the modern Olympics.  How the 385 yards were tacked on to the 26 miles so that English royalty could see the start from Windsor castle.  It shows how women were banned for many years (they have an interview with Katherine Switzer, who entered the Boston marathon with just the initial K, and finished it even after race officials tried to tackle her).  In fact, in many ways the female perspective is the most interesting, and they were there when Deena Kastor (bronze medalist in Athens) won her first marathon (Chicago 2005).  It even presents an interesting perspective that women have more endurance than men and are in general better adapted to run a marathon.  All in all, an interesting movie, and it was a bit shocking after the 104 minute running time when the credits announced that in the time it took to watch this movie, an elite runner would be 20 miles into a marathon.
Next up was "Lucio", the story of a man and a life so unbelievable, if you made a narrative film based on his life no one would believe it.  Lucio Uturbia was, by all outwards accounts, a simple Spanish brick and tile layer.  He opposed Franco, so he assumed he was a communist.  Until he talked more to people and they told him he opposed everyone in power--he was an anarchist!  He was also a skilled smuggler, a skill he learned in the military sneaking supplies out in the trash cans.  But his true gift was forgery.  He forged CitiBank traveler's checks (this was in a time before ubiquitous ATMs and worldwide credit cards, when traveler's checks were the choice for currency when travelling overseas.  They were also reputedly harder to counterfeit than the US dollar).  He brought CitiBank to its knees, to the point where there were so many forged checks that European banks stopped accepting CitiBank checks over $10.  But here's the strangest part--he didn't get rich doing this.  The money went to the cause and social activism.  He still lived as a simple brick layer, just a brick layer with oddly powerful friends.  The movie moves fast (you have to read subtitle fast to keep up), and clips along at an exciting engaging pace that almost makes it an action film (and re-enactments make it feel more narrative).  This was the first movie in the festival that sort of blew my mind.  This is what makes documentaries so great--when truth is stranger than fiction.
Next up was another unusual character, nature loving curmudgeon Jim Stiles, in "Brave New West".  Jim Stiles moved to Moab, Utah, inspired by the writings of Edward Abbey.  He worked as a seasonal park ranger, and instinctively protested against construction projects, including the damming of the local river.   As this movie starts out, he seems like another garden-variety anti-progress tree-hugging hippie.  I love nature, and grew up as a Boy Scout in the Pacific Northwest, but anti-progress types tend to annoy me with their simplistic single-mindedness.  So at first, I didn't think I'd like him.  But it turns out he's a clever cartoonist with a pretty wicked sense of humor, and he totally grew on me.  He used his combination of politics and art to create The Canyon Country Zephyr (a zephyr is a warm breeze, which he suggests might mean he's full of hot air), a self-published newspaper about local happenings and opinions (his and others).  Over the course of the film, I found I grew more and more respect for him.  He starts as a man with whom I'd sympathize, but I wouldn't go to his extreme.  But he shows himself to have an excellent sense of humor (about himself as well), and a willingness to admit when he's wrong and make friends with the other side.  Some of the letters to the Zephyr provide some of the greatest humor, as longtime fans become pissed off by one article, life long haters write in just to vent, and people of all mindsets write in to disagree but acknowledge he's a funny and talented guy.  So by the end, I can count myself as a casual fan.  I'll probably start reading the Zephyr online, at least to check it out for a while.

Next up was the comical show of the festival so far, starting with the short "A Stiff Upper Lip".  Dave Hill is an Englishman with a fairly impressive mustache.  So he finally decides to take the plunge into competitive facial hair.  That's right, the 2007 World Beard and Moustache Championships.  He's sorely underestimated the competition (which is hilarious), but a wild, wacky time is had by all.
By the way, speaking of shorts I have to give a shout out to Current TV.  For the first time ever, DocFest has a sponsor, and they're it.  I haven't been reviewing these, but Current TV has curated shorts to play with every movie, and they've been doing a fantastic job.  They must have an endless collection of ~3 minute shorts by viewers all over the world, because they seem to always find one to match.  For "Chelsea on the Rocks" they found a similar artists community in Denmark (I think it was Denmark).  For "Spirit of the Marathon" they had one about exercise addicts.  For "Brave New West" they had one about a young cowboy poet.  For "Anvil" (later in this post) they had one about a hard rockin' monk.  I haven't been reviewing them because frankly I can't remember them all, but they've been a lot of fun.  But here's just one big applause for Current.
Anyway, from one silly competition to another, the feature program was the world premiere of "Come on Down! the Road to 'The Price is Right'"  On a personal side, when I was a kid and got sick and stayed home from school, I would lie on the couch and watch daytime TV.  The one show I always remembered was "The Price is Right".  It was entertaining, but I'm not sure if being sick is a positive association for the show.  In any case, it's the only one I've got.  As for the film, directors Jeruschka White and Caryn Capotosto found and followed dozens of die-hard TPIR fans as they try to a) get tickets for the show, then b) get called to "Come on down!", and c) actually win something!  Starting from the wacky obsessed fans, it's a fun, silly romp the whole way.  No game show has ever inspired such a bizarre, fanatic following.  There's a hotel near the studio which gives nightly (free) workshops on how to make it on the show.  There's a family whose Christmas Eve tradition is having their own homemade TPIR contest.  There's a hard rock band who made a tribute song to the show.  And, of course, there is (or was) Bob Barker(now replaced by Drew Carey) and the legions of fans who want to kiss him.  I don't know what to say to or about them, other than it was fun to watch.  And in all likelihood, that's really the key to the success of the show--they know how to pick the most entertaining fans to be contestants.
Jeruschka White and Caryn Capotosto: 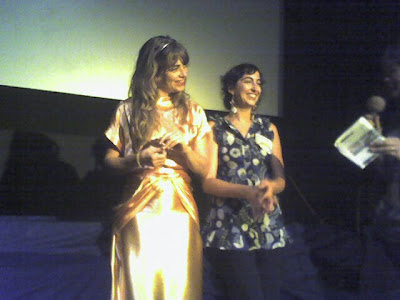 And finally, the last movie of the night was "Anvil!  The Story of Anvil".  More than any movie so far, I was convinced this was at least partly a mockumentary.  Not that I can't believe they exist, but there's just too many obvious references in the movie to the greatest hard rock mockumentary of all time--"This is Spinal Tap".  In a way, it plays like a real life Spinal Tap.  Childhood friends Steven "Lips" Kudlow and Robb Reiner (yes, nearly the same as "Spinal Tap" director Rob Reiner) made a pact to rock together forever.  35 years on, in their 50's, they're still trying to make it big.  Okay, just to get it out of the way, the other Spinal Tap references I caught (and I'm sure I'm forgetting one): Yes, Robb Reiner is the drummer.  There's a close-up shot of an amp being turned up to 11.  They visit Stonehenge.  It begins and ends with their only successful shows--of course in Japan!  That opening show was in the 1980's in a Heavy Metal tour with up-and-comers like Metallica, Anthrax, Slayer, Bon Jovi (actually, I can't remember if all of them were on the show).  And they rocked the house, with shocking antics like playing the guitar with a vibrating dildo.  Other touring rockers acknowledged that they were pushing the envelope, and the goal became to out-do Anvil.  Well, every other band on that tour ended up selling over a million albums.  But not Anvil.  35 years later, Steven and Robb are still best friends, although they fight all the time.  They work blue collar jobs around Toronto (Steven for a children's catering company, I forget what Robb does).  When they can book a tour, it's their vacation they pay for--it's not a money maker.  But when they do tour and run into other famous rockers, the rockers know and respect them.  They've made 12 albums ("Metal on Metal" was their one big "hit", and was influential on a lot of other band), but even they acknowledge most of them sucked.  They've suffered under bad or no management.  They've had poorly produced albums.  And when they're booked for a 10,000 seat show, only a few hundred show up.  I know, it seems like a joke, but the Internets swear it's true.  This follows their last big shot at fame (which might be this movie), as they take a tour through Europe, try to reconnect with the producer who made "Metal on Metal", and take one last stab at success in Japan.  It's funny, it's tragic, it's emotionally bare--it's heavy metal, Anvil style.
Posted by puppymeat at 9:10 AM