Two more movies last night. Also, Yom Kippur began at sundown, before those two movies started so I had to do this with no water, no food, no alcohol, not even any caffeine. For the first time, I went to a film festival on the Day of Atonement, and I had to rely on movies alone to sustain me (until sundown tonight when I feast on bacon). Which reminds me, if I've offended any of my readers in the past year, I'm sorry, please forgive me.

I'm sure there's a clever segue from fasting to chowing down on human flesh, but my mind is a little hunger-addled (and dehydrated), so I can't come up with it. The first film was the ultra-low-budget locally made bad-taste comedy, "Retardead". A nominal sequel to the filmmakers' earlier feature, "Monsturd" (I guess it's about a poop monster, but I haven't actually seen it), it spins the sinister tale of Dr. Frank Stern, the creator of the poop monster who survived his supposed demise in the sewers. He surfaces and gets a job working in a special education facility. He has a serum that turns the blithering retards into super-geniuses. Trouble is, in previous test trials the subjects eventually went crazy, and started devouring each other--after having massive fatal heart attacks. Wacky, bloody, silly hijinx ensue. The low budget very clearly shows, it could use some more time in editing, particularly on the sound. But it's carried by its outrageous anything-goes sense of humor, milking laughs out of retards, vomit, poop jokes, and lots of fake blood. The filmmakers described it as a cross between Monty Python, John Waters, and George Romero (with a few inside references to each), and that's pretty apropos. Fun times, plus a kick-ass appearance by the Living Dead Girlz. Here are the guys behind it (and at the opening night party, it was a recurring joke to say, "Hey, aren't you the 'Retardead' guys"), Dan West and Rick Popko: 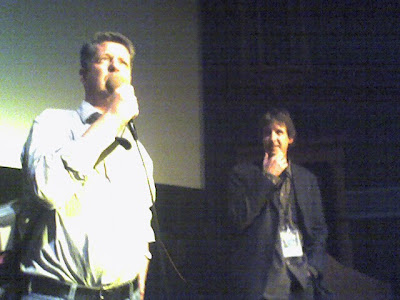 So just above I mentioned the Living Dead Girlz. The creative force behind them is one Shannon Lark. She's a local filmmaker and through her production company (Chainsaw Mafia), she found the all-women Viscera horror film fest. Dead Channels is a big supporter of Viscera, and showed a program of last years films, plus an old Anna Biller ("Viva") classic short, "A Visit From the Incubus". Here's the rundown:
"The Cleaner"--OCD can get in the way of a good marriage. So can cheating husbands and slutty mistresses (played by Shannon Lark). That's why there's more industrial strength cleaners.
"Wretched"--A study of bulimia and a clueless husband (played by Joe Bob Briggs, the famed drive-in reviewer). Lots of vomit, blood, and body issues. Moral: don't go back for more french fries.
"Out of Print"--Beautifully shot and executed, a simple, dialogue free look at a mechanical doll who likes to tie up girls and have fun with an axe.
"I'm a Little Teapot"--The shortest movie in this set, and in a way my favorite. A little girl with a garbage bag over her head starts to sing "I'm a Little Teapot", then she gets shot. But really, it's about the movie I immediately made in my mind about how she got to that point and who shot her.
"It's My Birthday"--And I'll torture all my guests if I want to. Excellently bloody movie by Shannon Lark.
"When Sally Met Frank"--A twisted take on plastic surgery, you filthy pigs!
"Snake Pit"--A sick little torture flick a la "Texas Chainsaw Massacre". The classic scenario of a car breaks down on a lonely rode, passengers meet the locals.
"BRAINS"--A comic music video starring the Living Dead Girlz and their hunger for BRAINS!
"A Visit From the Incubus"--Anna Biller's classic, gorgeous western. The Incubus is a demon who rapes women in their sleep but disappears as soon as they awake. Lucy (Anna Biller) has been getting visits from the Incubus. They're horrible, and becoming more frequent. To get her mind off it, she goes into town to get a job--as a singer in a local saloon. The Incubus also tries to be a singer, but she's a hit while he's not. Beautifully shot, very funny. No wonder she lives the life of a star. [update, if you're an Anna Biller fan like me and want to check out all her early short films, there's finally a DVD compilation of them available on her website here.]

[updated update: What the hell am I thinking!? If you want to get a DVD of the 2007 Viscera Film Festival, you can get that here. I would've bought one last night at the screening, but I was out of cash and had to run to catch the BART home.]

Here's a pic of the brains (no pun intended...okay, pun sorta intended) behind Viscera, Shannon Lark with director Reyna Young ("Out of Print") 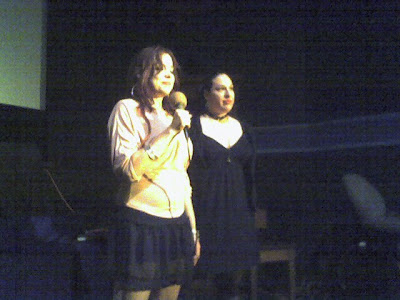 Posted by puppymeat at 7:48 AM

If you encounter such aHandmade Ceramic Teapot pot, the treatment method is the same as the "sweet kettle" mentioned above. You can put it in a rice cooker without oil, cook it with a simmer, Cheap Ceramic Teapotsp