Just one movie last Tuesday, that was my easy night, when I actually got home at a reasonable hour and got some sleep.
So I need to explain the theme I've found in this festival.  I'm not sure if it's intentional or not, maybe it's just a common theme for documentaries in general, but there's been a theme of people trying to accomplish that one thing that will change their life.  The interesting thing, though, is that when people consciously try to change their life it doesn't really work.  Stuff like 'If I could only walk across the country, or win one Elvis impersonation contest, everything will be alright' fails.  When you do the small things, like practice jump rope or learn to twist balloon animals, they really are changing their lives.  I find that very interesting.
So the Tuesday movie was perhaps the clearest example of this phenomenon.  In "Enlighten Up", director Kate Churchill has been doing yoga nearly as long as she's been making documentaries (which is nearly 10 years).  She believes that finding the right yoga practice can change anyone's life.  So she looks for a willing volunteer, and finds Nick Rosen, a skeptical journalist who's between jobs and therefore has a lot of free time.  He's game, but as I said, skeptical.  He's not a spiritual man, so he has a very strong inclination to approach it purely from a workout perspective and ignore or question the spiritual aspects.  He also visits several different studios and meets several different yogis, from masters like BKS Iyengar and Pattahbi Jois to former wrestler Diamond Dallas Page (inventor of Yoga for regular guys, and who's unabashedly not in it for "Namaste" as much as for "T&A").  He travels from New York to LA, to Hawaii, and finally India.  He finds practices so disparate that he questions what Yoga means at all (which is interesting, because the contemporary practice of yoga is only ~100 years old, and historically a yogi was an wizard who was to be feared when he came to town).  Practices range from hard-core twisting yourself into a pretzel to a guy who teaches a class of people just standing around laughing.  Of course, his skepticism is causing Kate's experiment to fail, and sooner or later that friction becomes the conflict of the movie, which just makes it funnier.  There are some weird dream sequences that maybe point to yoga breaking through his skepticism, and by the end maybe there's a little movement, but it's certainly not the transformation that is looked for in the film.  But it was fun.  Here's director Kate Churchill and star/subject Nick Rosen at the Q&A: 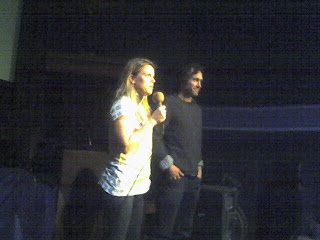 Posted by puppymeat at 3:07 PM

Great review. I'm a yoga practioner and dying to see Enlighten Up when it comes to New York. But do you think people who are not into yoga will like this film (like my boyfriend, who sounds a lot like Nick, including the "between jobs" part)?

Well, I'm not into yoga and I enjoyed it, but I am into almost any movie.

I think Nick provides an excellent bridge from the "non-yoga" world to the yoga world. In fact, it's probably easier to sympathize with his journey if you're not into yoga. I'd be more worried about people who take yoga way too seriously and believe they have the one "true" practice, because there will be yoga masters in this movie that challenge your practice.

So, in short, I don't know you or your boyfriend at all, but I wouldn't be surprised if he likes "Enlighten Up" more than you do.