First up was the exciting world of competitive jump-rope, with "Jump!"  Yeah, everyone knows how to jump rope, but few people know how to do it like this.  There's speed jumping, solo freestyle, tandem freestyle, double dutch, pairs double dutch, and all (except for speed competitions) featuring some crazy freakin' gymnastic tricks.  The movie follows some of the most impressive jumpers in the country, from 12 year old Tori (the up-and-coming star of American jumprope, and definitely the star of this movie), to old veteran vanguard teams like Razz Ma Tazz and Summerwind Skippers.  They follow these teams in practice and competition from regionals to the national championships to the world championship (and if there's one complaint I'd have, it's that the world championship is tacked on too abruptly at the end, with no buildup or explanation of how the national teams are formed).  The jumping is amazing, the characters are engaging, the movie is fun and sometimes funny (and sometimes painful, there's one big crash in the movie, and a badly flawed routine at the national championship that is painful to watch).  I've never heard of competitive jump rope, and with an introduction like this, I'll never make fun of it.
And that was followed up by a sport I have heard of (and made fun of), "Sync or Swim" follows the U.S. Olympic Synchronized Swimming team through the trials and practice leading up to and including the 2004 Athens games.  I will just apologize in advance and admit that as much as I know they are incredibly dedicated athletes who will never really strike it rich from their sport, I still think it looks freakin' silly.  But this movie let me get to know the women who do it, and care about them as people (and I'm sure it looks less silly when it's your friend, sister, daughter, mother, wife, etc. doing it).  The friendships and quick bonds that form are touching.  The grueling practice days under their tough, opinionated coach are fascinating to watch.  The tragedy when team member Tammy Crow lost control of her vehicle (actually, her friend's SUV), broke her arm, and killed her two passengers is devestating.  Then there's the subsequent media storm, as she's charged with vehicular manslaughter (allegations of drinking the night before, speeding on a slick mountain road), pleads no contest (which she later regrets), and is sentenced to 90 days, starting after the Olympics (which is a widely criticized, controversial decision).  That threatens to become the plot of the movie, but thankfully director Cheryl Furjanic chooses to keep it about the swimming (not that Crow's incident is not important, it deserves attention and could very well be the subject of a different movie, just not this one).  The end result, despite ups and downs, is a fun, entertaining movie about dedication, passion, and athleticism.  Plus it's got a cameo by the grand dame of synchronized swimming (originally "water ballet"), Esther Williams.

Here's a pic of director Cheryl Furjanic doing the Q&A after the movie: 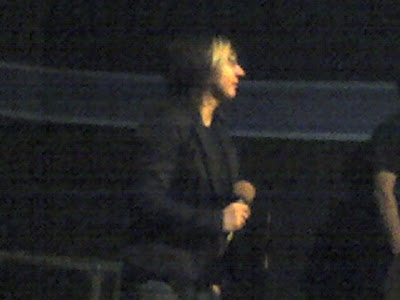 Posted by puppymeat at 2:27 PM

Thanks for including JUMP! in your comments above.

Please let your readers know that JUMP! is now available on DVD at www.jumpmovie.com/shop.

The film's awesome soundtrack -- with songs culled by renown DJ Garth Trinidad and original music my Matt Messina (composer of "Juno") is also available for secure digital download at that site.