This Docfest thing just keeps going forever. The day started with a chat with Melody Gilbert, the recipient of the first filmmaker tribute award ever in the history of all things Indiefest (Indiefest, Holehead, or Docfest. Previously they only gave awards to individual films, and then only the audience balloting awards). She received the "Someone to Watch" Award, and for the first time ever Indiefest gave out a physical award (instead of just the right to put laurels and the Indiefest name on their poster/DVD art/etc.). For the whole weekend, Melody was showing off the medal Jeff Ross gave her. Anyway, at 12:30 Saturday, we were treated to an extended chat with Melody, where she showed clips from all her film. Starting with her earliest one, "Married to the Mall". Then her freaky medical oddity duo, "Whole" and "Life Without Pain" (more on that one later). Then "Urban Explorers" (which I saw at Cinequest last year), and finally into the ones I hadn't seen yet. "Disconnected" was one she made with her students at Carleton College (again, more on that later) which she executive produced rather than directed. "Fritz" is the documentary she made about Walter Mondale, which is so new that Docfest didn't have a chance to program it. Between each film we talked briefly about the subject and what it was like to make it. Then we ended with a special sneak preview of the rough cut of her newest film. I can't really tell you much about it, not even the title (which might change anyway). I can tell you she once again executive produced rather than directed. And I can say it's about the pharmaceutical industry and one man's journey to transition off of prescription antidepressants. It's powerful, emotional, and I can't say anything else. Look for it to come out soon. It was also an interesting experience to see a film in the process of being completed, and share critiques with the filmmaker.

Melody Gilbert weekend continued with her third film, "A Life Without Pain". I'd seen this a few years back at a previous Docfest (I think it played at Docfest, not the general Indiefest), and was impressed. But in looking through my archives I find that was from a time before I wrote about every single movie I see, so I don't have an old review to fall back on (like you might have noticed I did for "Whole"). Well, "A Life Without Pain" is an interesting companion piece to "Whole", only in as much as it's about an odd and incredibly rare medical affliction. The title is pretty straightforward--people born without the ability to feel pain. They can feel touch, pressure, pleasure, etc. But the pain nerves don't work (or the brain doesn't process the pain signals right--there are actually two forms of the disease but the movie doesn't get into that). Melody follows around three little girls (all girls sort of by coincidence, although more girls have this disease than boys--the opposite of "Whole"). And until you think about it, you'd think this wouldn't be a big deal, it might even be easier to live if you didn't feel pain. Oh, boy, would you be wrong! How do you learn not to touch the stove or chew on your own tongue if it doesn't hurt? Children learning to walk tend to hit the ground pretty hard, and will stop and rest when they start to get sore. Well, not these kids. Melody follows around the difficulties children and families have dealing with this disease and keeping the little girls safe when the pain response doesn't work for them. I remember when I saw it years ago it was a fascinating movie. But I had forgotten how scary and traumatic it could be. I realized watching it again that this is a very empathic movie. Every time 3-year old Gabby runs headfirst into a table, I feel all the pain she can't feel.

Here's a pic of Melody Gilbert. I'm not sure which Q&A I snapped this at: 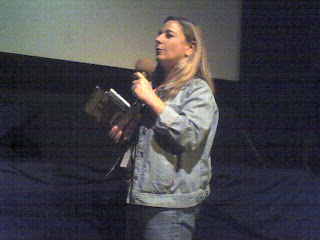 Next was yet another Melody Gilbert screening, but first things first: "First ____" is a short by Indiefest alum Dave Laden (winner of the Audience Award for best short in Indiefest 2007 for "The One").  Here he interviews a series of people about their first...whatever.  First name, first pet, first love, first sexual experience, first car (I think).  But he doesn't always let the audience know what the question was, and you have to figure it out.  Pretty clever, with some funny, interesting results.  Here's Dave Laden taking questions after the movie: 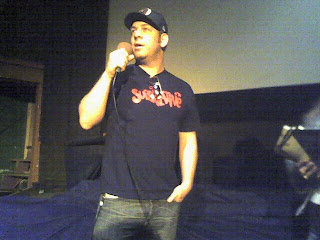 And the feature film was one Melody executive produced, but was really directed by her students at Carleton College (in Northfield, MN).  "Disconnected" follows the story of three college students as they attempt to go a full term (or at least three weeks) without using a computer.  An interesting experiment, because I actually rarely used a computer in college (certainly didn't blog or surf the Internet, I probably just used it a few hours a week for work).  So much has changed, and it's mean to make me feel this old.  But at least as an old guy, I can take some solace in the fact that the young generation is a bunch of idiots who don't even know how to work a typewriter!  (sigh...I really am old)   Anyway, the three volunteers (Andrew, Caitlin, and Chel) first encounter boredom, then frustration (as so many services and required tasks are online now).  They do learn some lessons about changing work habits (Caitlin talks about organizing her paper much better in advance since she can't use a word processor), and appreciating different things in life (although I can't help but think of this xkcd cartoon).  Ways they "cheat" (or rationalize cheating) are funny.  And the final moments when each decides when he or she will turn back on the computer are oddly dramatic (and not just the competition of who has more e-mail piled up).  All of them agree that while computers are good, they'll probably spend less time on them now.  Very interesting.

Next up was a very different kind of movie, "Fat Man Walking".  Steve Vaught was a broken man.  An ex-marine, now a tow truck driver in north San Diego County.  A few years back he got into a bad car accident and killed a pedestrian.  He fell into (more of a) depression, and ballooned up to 400+ pounds.  Then one day, he decided he needed to get his life together, chase away his demons, and make a fresh start.  So he decided to walk from Oceanside, CA to New York City.  And he eventually did it, over the course of 13 months (with a break to fly back to LA for a little training).  Along the way, he became famous, signed a book deal, signed a vitamin endorsement deal, made this movie, lost his wife, fell to pieces many times over, and...well, you can't tell from this movie whether he chased off any demons or turned his life around.  While there's a clear narrative, this movie nearly abandons it and instead plays like an extended nightmare hallucination of his anger and frustration not just with the walk, but with his life before, during, and after the walk.  There are scenes of him screaming at his wife (and later of her packing up all his stuff and moving it into storage).  There are scenes of him obsessing over hate mail on his blog (http://www.thefatmanwalking.com/)  There are scenes of him complaining about the pain, exhaustion, and how long it was taking (original plan was ~3 months or so).  But there are also scenes of the people he inspired, and the hope he brought.  He was actually at the screening, and did assure the audience that while fortune never really materialized, he has learned (somewhat) to concentrate on the 80,000+ people who wrote nice things, and not obsess over the dozen who wrote mean things (who knew people were nasty, cynical assholes on the Internet?).  Fascinating, and a little scary.
Here's P. J. Bagley (Producer/Director/Editor/Cameraman), Steve Vaught (the Fat Man himself), and David Mollering (Producer/Cameraman) at the Q&A after the movie: 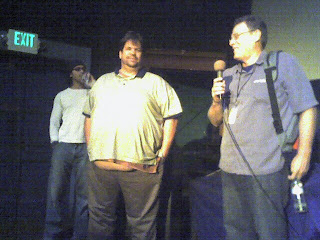 And finally, the last movie of the night was "Toots", about the legendary Manhattan saloonkeeper Toots Shor.  Toots was a unique man in a unique period, ruling over the hottest, hippest bar in Manhattan, serving with equal honest charm Supreme Court justices, gangsters (there's a legend of Earl Warren and Frank Costello on opposite sides of the bar on the same night), singers (Sinatra was a regular), and sports heroes (DiMaggio, Frank Gifford).  And they weren't just clients, they were friends (whom he'd often greet with good-natured profanity or jocular racial epithets).  Not bad for a Jewish hustler bum from south Philly.  This movie was made by his granddaughter, and is full of charming anecdotes and great footage, all tied together in a pretty picture.  This is a very standard homage film.  I don't think they included any negative stories of Toots (or if there were, they were examples of his outrageous behavior).  If you're interested in the man, or in the time and place (and the two are pretty inseparable), it's an interesting movie.  If you've never heard of him, and couldn't care less about mid 20th century Manhattan, there's probably not much here for you.

And that was last Saturday at Docfest.  I'm catching up slowly.