Yup, day 6, and no end in sight.  Or at least, the end is too far off to see.  Anyway, two more movies last night, both of them fun, light treats.
First up was "Twisted: A Balloonamentary".  Yup, an hour and a half of balloon animals and other incredible sculptures, and stories of how learning three simple twists (to create a balloon doggy) can change your life.  There's a brief, animated history of balloon twisting--which predates balloons (it started with animal bladders, etc.)--narrated by Jon Stewart.  Then it launches into the personal stories.  There's an equal mix of personal stories and incredible balloon art, each of which is fascinating in it's own right.  Probably the most poignant story is Vera, a 20-something woman who grew up impoverished living in a trailer park.  A kind neighbor loaned her $60 to take a class in balloon art, and within a couple of weeks working kid's parties she payed him back, and is now putting herself through med school.  Yeah, you can make a lot of money (6 figures, if you work at it) twisting balloons, just ask Michele, who runs several balloon twisters out of Las Vegas (she's the one who really seemed a smart businesswoman as well as an artist).  There's also John, the ex-felon, abused as a child, who is now a balloon twisting evangelist who tears up as he describes the joy of making a Jesus on the cross out of balloons (I kid you not.  At twisting conventions like "Twist and Shout", the 11 pm hour is dedicated to two classes--Christian balloon twisting, and adult balloon twisting.)  There's James "Mr. Me", an African American grandfather who brings his positive message to the poor streets of Atlanta.  And then there's the competitive twisters like the Great Wandini or David Grist (widely thought of as the nicest star in the balloon twisting world).  There's even true love, Don "Buster Balloon" and Laura "Annie Banannie", who met twisting balloons, fell in love, and got married.  She wore a wedding dress made of balloons, the best man gave him a safety pin as a gift.
While the people are interesting, the sculptures themselves are amazing.  It all starts with a little doggy, but from there it goes anywhere and everywhere.  Giant Trojan horses, haunted houses, full-size furniture, giant sharks, racecars, whatever.  Words can't do it justice, just go see it.  If you're in the bay area, it plays again at the festival Wednesdsay, Nov. 5 at 9:30 pm in Berkeley.  If you're not in the bay area, or can't make it out, there's a link to purchase the DVD on the film's website.
Afterwards, Brian Asman from Balloons Equal Fun (who had small cameos in the movie) was there to talk about balloon twisting and teach us how to make a simple three-twist balloon doggy. Here's your proud blogger/film fanatic with my new pet, Col. Squeakypuppy: 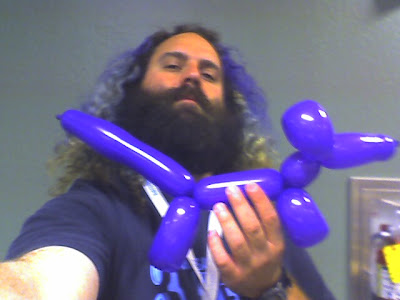 And the second movie was one that maybe was supposed to be a little more serious, but I and the rest of the audience found it pretty hilarious (the director even mentioned he never saw his film get more laughs).  "Break Up Date" is a look at the world of dating, breaking up, stupid things people do, cuddle parties, and why so many people are single.  They interview a series of people (some average people, some relationship experts) as they describe their worst break-ups, worst dates, hopes, fears, and ideas on love and life.  They follow them through various activities (most of which the characters bravely volunteer to try for the movie) like online dating, speed-dating, nerd meet-ups, cuddle parties (non-sexual, pajama-clad touching), etc.  Most of the characters have a good sense of humor about it all, even when describing really painful events.  And of course, I had to laugh and cheer when one of the authors of "The Rules" got divorced.
Okay, a little note about San Francisco.  Director Collin Souter mentioned that he'd never seen his film get so many laughs.  Well, recently a survey found that the SF area had the highest proportion of single people in the country.  My theory, we're jaded and "too cool" to couple up.  Screw the stupid conformists who need other "sheeple" to make their lives worthwhile.  At least, that's why I laughed.  Any other SF Bay Area-ites (Bay Areans just doesn't sound right) want to comment/disagree?
Okay, that was day 6 at Docfest.  I'm all caught up on blogging, so it's about time to head out for more movies tonight.
Posted by puppymeat at 7:09 AM

Hi there. Thanks for the nice words about "Twisted." It's been great to help share what we love with everyone.

The next Twist and Shout balloon convention will be here in Southern California, in Cerritos. Not far from you, so come on down. Col Squeakypuppy needs a friend.

Hi Jason. Thanks for the little write-up. It's an interesting theory and you would know better than I, so I'll take your word for it. I actually should have said that the movie getting the laughs it did was a good thing. I wanted the movie to be funny whenever it could be, so hearing the audience laugh this much (both nights) was great for me to hear. We had about 90 people show up for the second night and, strangely enough, people hissed when Marcia (co-founder of Cuddle Party) talked matter-of-factly about the influence of the women's movement. I wish I knew why. She wasn't condemning the women's movement. She just stated her thoughts on it. But people hissed. Weird. Anyway, thanks for showing up and writing about it. I had a blast in your fine city and hope to return someday.

All the best,
CS