At a special sneak preview put together by CAAM (the good people behind SFIAAFF).

This movie (which was nominated for the Best Foreign Picture Oscar) already played at the SF International Film Fest, and missing it there was one of the most heart-breaking decisions I made in my schedule. But I figured it would be released (and it will open in limited release on June 6. Not sure if that includes the bay area at that time, but if not it will be shortly thereafter). Anyway, I got the extra bonus of seeing director Sergei Bodrov there. So it all works out, like the movie gods are rewarding me (I guess for all the clean living I do?)

As for the movie, it's excellent. It's the first in a planned trilogy (although Bodrov claims that was originally a joke, and now he's only interested in making part 3, not the middle part), and explores the early life of the Mongol Temudjin, who grew up to become Genghis Khan. It's been controversial in Bodrov's native Russia for it's positive, sympathetic portrayal of the young Khan. And the character in this movie is at odds with the conventional western concept of Genghis Khan, too. This is before he was a leader and a tyrant who conquered half the world. It starts with him as a young boy, on a trip with his dad to choose a wife (he's only 10, so he'll come back and actually marry her 5 years later). At a rest stop (not where his father intended to find a bride), he chooses young Börte, who makes up the love story of this movie. In contrast to the Khan with 1,000 wives he later becomes, this movie is really a touching love story, as he survives hardships and attempts on his life to find her and marry her, only to have her kidnapped. He goes against Mongol tradition to start a war for a woman. He endures slavery, prison, and eventually unites the Mongols under a simple but ruthless code of law, all for the lover of Börte.

The adult Temudjin (he's never actually called Genghis Khan until the very end) is played by Japanese actor Tadanobu
Asano, star of many popular and cult movies (I'm still waiting for him to break into the mainstream in America, but I feel it'll be soon). He brings all his charisma to the role, and is just awesome. Khulan Chuluun makes her movie debut as Börte, and is also great. In many ways she's the true leader who Temudjin follows, and it's set up in the first scenes with Bayertsetseg Erdenebat playing the young Börte.

There is so much to love about this movie. It's beautiful, the acting is great, the story is compelling and offers a different (but fact-based and researched) view of a famous figure. I can't wait to see the next two.

I'll leave you with this pic of SFIAAFF assistant director Taro Goto with "Mongol" Director Sergei Bodrov. By the way, in the short Q&A afterwards, Bodrov was very funny (for example, when he talked about wanting to skip part 2 and go directly to part 3). 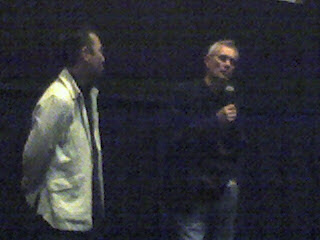 Posted by puppymeat at 1:18 PM