And I've never said this about a film festival before, but finally! Honestly, that festival was great, but seemed to take for-freakin-ever!

One last movie, back at the Castro for Alex Gibney's (Oscar winner for "Taxi to the Dark Side") documentary "Gonzo: the Life and Work of Dr. Hunter S. Thompson". Now I knew of Hunter S. Thompson casually as the gonzo writer of the "Fear and Loathing" books, and had heard some stuff about how he became a gun nut liberal-libertarian who lived out on a ranch and was just bitter all the time. Then he killed himself. I loved "Fear and Loathing in Las Vegas", both the book and the movie (and Johnny Depp appears in and narrates this movie). But what I'm getting at is I never really had a comprehensive view of the Hunter's work until now. I've never read "Hell's Angels", although I knew he wrote it. I never knew he ran for (and very nearly won) sheriff of Aspen. I knew he wrote about politics, but I always thought he was pretty bitter and cynical about it--I didn't know how much he truly believed in George McGovern. But since it's impossible to sum up the movie, I'll just say it's as well made as you'd expect from Alex Gibney (besides "Taxi to the Dark Side", he also made "Enron: The Smartest Guys in the Room", which actually made the Enron scandal comprehensible and entertaining). And I'll relate the one anecdote that struck me the most:

In 1974 Hunter S. Thompson was a guest of Senator Ted Kennedy at a dinner at the University of Georgia. The governor of Georgia gave a speech there where he talked about how his family was farmers for generations, but he never understood the conditions of the workers on the farm until he heard the words of the great American poet Bob Dylan and his song "Maggie's Farm". A politician citing Bob Dylan immediately caught Thompson's interest. And he listened to (and tape recorded) the speech, as this governor went on to rail against the ethics of lawyers--to a room full of lawyers. Thompson was mightily impressed, and thought to himself 'This Jimmy Carter, I must make him President'. And so he wrote a glowing review of his speech for Rolling Stones, and the rest is history (and apparently the last politician Hunter S. Thompson respected)

Here's a pic of director Alex Gibney, and I apologize but I don't remember who the woman next to him is: 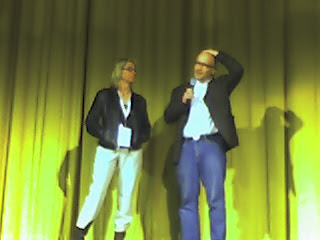 Well this is in reference to a very old discussion we had about Tebby Assassin a long time ago where I defended Apple because they released the Quick Time Player to multiple OS's. Even though this is off topic I want to apologize to Eric. Apple has become more and more fascist with the release of Leopard and today the Westfarms store management actually told employees that they had to remove outside e-mail addresses from one of their .mac groups list. The list was known to often discuss movies and other "threatening" things like that among Apple, ex-Apple and some non apple, but related, employees, and yes occasionally bitch about Apple. DotMac is a public service that anyone can get by the way. These are the employees private e-mail accounts, still the mgmt. was worried about possible public contamination and threatened enough to get them to remove ex-employees from their private e-mail lists. That's like you getting a private g-mail list, being an employee of a company, and them censoring it. Whether corporate would approve of this or not is beside the point. Apple management officially censored a private e-mail list which as far as the employees at the store are concerned is the company. I am an ex Apple employee, I left to do some other things, and I was on the list. I'll keep internal information out of my commentary, and try to stay focused instead of ranting about other ridiculous things that happened there, but the point is that a private list was censored by Apple, as far as I can tell, and that means that no matter how good their stuff is they suck too much to support anymore. So sorry Eric. No company, especially one that basically stole it's original GUI OS anyway, should have a right to censor their employees outside of work over a silly e-mail list. People are supposed to be able to get a break from their work... anyway, more in depth analysis at baceman007.blogspot.com Again Sorry Eric, nothing Apple is good if the price is that the employees can never get away from work. Besides Ubuntu Linux is ready for consumer prime time. I should note that as far as I know the information on this list never became public from the list aside from the things that get through the cracks from other sources anyway. So it really wasn't a threat. Customers say more damaging things on sites like the consumerist all of the time.