We're getting down to the end. Two more movies last Monday, back at the PFA (for the last time in this year's festival)

First up was "Cochochi", an unusual opportunity to see a movie about and starring Mexico’s Tarahumara natives (and in their native language, no less). Laura Amelia Guzmán and Israel Cárdenas are photographers by trade, and their ability to frame a beautiful shot shows. They're aided, of course, by some beautiful and striking landscapes. And the story they tell is equally beautiful, while also being simple and charming. Two brothers, fresh from finishing the school year (the eldest is graduating grade school) are sent on an errand to deliver medicine to their great-aunt and uncle. In the particular social network of the community, they are informed of their task by the community radio program. Willfully disobeying their grandfather, they steal (or "borrow") his horse to make the journey. But things go horribly wrong when the lose the horse (or maybe it was even stolen by bullies). It's a sort of coming-of-age story, as they take on more responsibility (and more blame) then ever before. But it's also a fascinating depiction of the intricate social network of the Tarahumara tribe. And it's sweet, just sweet and charming.

And then I saw "Secrecy", one of the most fascinating documentaries in the festival, followed by one of the best Q&A's I've ever witnessed. Harvard professors Rob Moss (film lecturer) and Peter Galison (professor of the history of science and of physics) teamed up to make a movie not really about the specific secrets our government keeps, but the nature of secrecy itself. They use some pretty nifty cinematic techniques (including animation) to suggest the nature of that which (by virtue of being a secret) cannot be known and hence not shown. And they interview a wide range of experts with pro-secrecy (or pro-security) and anti-secrecy (or pro-openness) ideals. On the anti-secrecy side, two very interesting points. First, in the entire 9/11 report there is (claimed) only one mention of an act that could've stopped the attack. According to interrogations of top al-Qaeda prisoners, if we had reported the arrest of Zacarias Moussaoui on August 16, 2001, they would've assumed that the conspiracy was compromised and called off the attacks. So in fact, openness would've made us more safe (granted, there's some conjecture there, but interesting). Second, and perhaps more damning, the legal precedent for the State Secrets Privilege in the United States is United States v. Reynolds (1953). In this case, a B-29 Superfortress bomber crashed, killing the entire crew aboard. Three widows sued for the accident report, the case went to the Supreme Court where they ruled that release of the report would threaten national security by revealing the bomber's top-secret mission. In 2000, the accident report was released as part of a mass declassification (organized by V.P. Al Gore). It was discovered that nothing in the accident report described the mission beyond "testing secret electronics". The report did detail negligence and incompetence at various steps--the plane should never have been allowed to take off in the first place. So the legal precedent for the State Secrets Privilege is in fact a fraud upon the courts. Interesting.

Also interesting, on the pro-secrecy/security side, are cases like how we were effectively tracking Osama Bin Laden by his satellite phone...until that fact was revealed in the news media. And there are plenty of experts more than willing to talk about the importance of keeping some secrets, and for the right people to be deciding what's secret or not. Now I can't remember if this was in the movie or the Q&A, but one interesting case was when a member of Congress showed a satellite picture of some Russian (or this might've been old enough to be Soviet) military equipment. It was not a secret that this equipment existed and we knew about it, so he asked--on the floor of Congress--why this is a secret. Turned out the secret was that we had a satellite in a specific location that could take pictures from a particular angle--and he revealed that secret.

Interesting stuff. I'm sure the right answer is somewhere in the middle of the extreme positions (not everything can be a secret, but some things must be). Another point (again, I can't remember if it's actually in the movie, but it definitely came out in the Q&A) is that one of the biggest problems is over-classification--too many secrets. It results is A) things the public should know not being released, and possibly more importantly B) people not taking the "real" secrets (the ones that should be secret) seriously enough--sort of a "boy who cried wolf" effect.

Again, fascinating movie and one of the best Q&A's I've ever seen. Here are the men behind it, Rob Moss and Peter Galison (and that's not a secret): 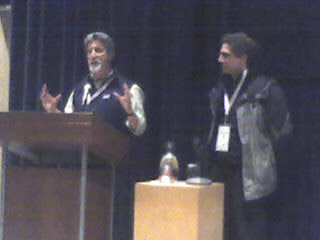 Just a couple more days left in this fest.
Posted by puppymeat at 9:25 AM