First up was "Stranded: I've Come From a Plane That Crashed in the Mountains". In 1972, a plane carry a Uruguayan rugby team en route to Chile crashed in the Andes. Of the 45 passengers, 16 survived a harrowing 72 day ordeal (including, yes, cannibalism). 2 walked out over several mountains until they found a shepherd, contacted the authorities, and rescued the remaining 14 survivors. This story was made into a book called "Alive!" by Paul Reads, and a narrative film of the same name. I haven't read the book or seen the film, but I knew briefly of the story. Now Uruguayan filmmaker Gonzalo Arijon has made a documentary. He grew up in the same neighborhood as the team, and was friends with many of them since childhood. As a result, he got amazing access and heartfelt interviews from every last survivor. I can't speak to how this compares to the book (which required the survivors' consent on the final draft) or the narrative film (which didn't), but I can say that this is an exceptional, moving, harrowing film that comes about as close as possible to reliving the trauma for the audience (short of actually putting the audience in a plane and crashing them in the Andes). I also can't speak of any insights this movie has which aren't in the book or movie, but I can tell you what struck me most was their thoughtful and devout Catholic approach to their situation. Cannibalism is treated as a form of holy communion. When an avalanche buries their plane (killing some, and leaving the final 16), many recall knowing they would die, and feeling a sense of joy and relief at finally getting to go to heaven (only to be pulled back to their hell on earth). But what struck me most is that when the14 on the plane hear on the radio that the 2 expeditionaries have made it to civilization and are leading a rescue party back, the first thing they do is organize the remains of the victims whom they had to cannibalize. It was most important that they be able to return the remains to the families and explain themselves (it's missing from the movie, but Gonzalo Arijon said in the Q&A that all the families understood, and one mother said straight out that she would've done the same thing).

Here's a pic of SFIFF associate programmer Rod Armstrong with Gonzalo Arijon and his daughter Luna (who did a great job of being really cute): 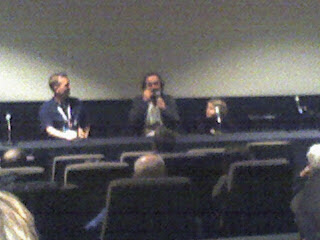 And then it was time to go to Winnipeg. When Guy Maddin ("Brand on the Brain", "Saddest Music in the World", etc.) shows up to SFIFF, you know I've got to be there. This time, he was commissioned by the Documentary Channel to make a documentary about his hometown of Winnipeg. Knowing Maddin, I have to wonder what the heck they expected to get. What they got was pure, unalloyed Maddin, which was awesome! (if you're a fan, you know what I mean. If not, go become one!) He narrates the entire film while a Guy Maddin impersonator plays him, falling asleep on a train trying to escape Winnipeg. With that framing device, he tells anecdotes of a city with ten times the North American average of sleepwalkers. A town haunted by his mythical mother (star of the 50-years running public access TV show, "Ledge Man"). A town of frozen horse picnics and Happyland being trampled by stampeding gay bison. Golden boy pageants hosted by a corrupt mayor. A land that sold war bonds with an "If Day" when Nazis and fascists invaded Winnipeg. A town with (we assume) the world's only 3-story swimming pool complex--one co-ed, one for girls only, and one for boys only (by the way, I can't get the phrase "Dance of the Hairless Boners" out of my head. If I ever somehow become a pedophile, I'm going on record right here and now saying that I blame Guy Maddin). And there's some weird stuff in it, too, but I wouldn't want to ruin it. Here's Guy Maddin with Rod Armstrong (that guy gets around). 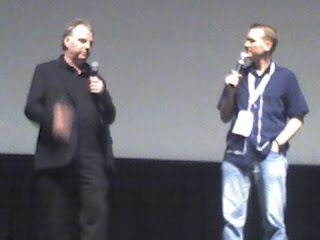 Awesome. Now I'm ready for a weekend marathon. Don't necessarily expect any more posts until Monday, by which time I'll have about a dozen to write.
Posted by puppymeat at 9:47 AM