Jason has a Starslyderz experience

At the fabulous and 420-friendly Hypnodrome. Sorry I haven't written in a while, but I've been recuperating from SFIFF (I seemed to get a minor cold as soon as the festival was over). But here's the scoop from the day I skipped SFIFF.

So a movie "experience" is more than just a movie. It's a movie...plus some stuff that makes it an experience. For example, this experience started with an outdoor concert by space aliens from the planet Zoopy and their Zoopy Girls: 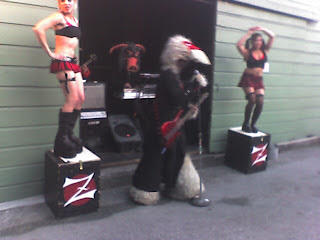 Now that was an experience! Then a few beers, and whatever, and we all filed inside for the show. Then a little smoke-shrouded homoerotic interpretive dance space-battle (sorry I couldn't get a good picture of that), and finally the movie started.

As for the movie itself, I don't know what the budget was, but it looked like it was lower than the molten core of the earth--and that's part of the charm. In fact, the non-budget + sex jokes + pot jokes is about 90% of the charm (the rest is mostly taken up with the pun "Gorgon, take me away!") In the year 2420 (dude...I just got that) Starslyderz protect the United Planets of America from evil-doers, like the aforementioned Gorgon. Gorgon has kidnapped the President's daughter, and she's hot so Captain Taylor is on the case like...a horny guy chasing after a hot girl. That is, when he isn't getting high and chasing after other hot girls. And wacky hijinx ensue.

Anyway, I had a great time, but I've got a sneaky suspicion that it doesn't necessarily play as well sober. Sometime I might have to test that. And I can, since I bought the DVD, along with a Starslyderz t-shirt, made from 55% hemp and 45% cotton (in China, Earth). I just have to say, I've never actually worn a hemp t-shirt before, and it's really fucking comfortable! I don't care about your politics or opinions about pot. Legalize it or not, whatever. But everyone should wear a hemp t-shirt at least once in their lives. And you want to know a great place to buy one? http://www.starslyderz.com/merchandise.htm Hey, you can get a DVD there, too!


Update: I forgot to mention that the "Starslyderz" experience was presented by Dead Channels, and it's a warm up for a summer of White Hot Wild Wednesdays (or something like that) at the Hypnodrome. The series starts on June 18th (when sadly, I'll be out of town) with "Socket". They played the trailer before "Starslyderz", and it's something about electricity freaks who grow electrical plugs from their wrists and plug in to each others sockets in the back of the neck. It's for gay pride month.