Jason goes to SFIFF and sees Errol Morris (on day 6)

Just one event last Tuesday, but it was a good one! Errol Morris receiving the festival's Persistence of Vision Award. The program included an onstage interview of Morris (interviewed by culture critic B. Ruby Rich from Santa Cruz), then a screening of his new film, "Standard Operating Procedure", and finally a Q&A about that film.

So first the interview. I've only seen a couple of his films, but I knew he specialized in the direct interview documentary style. What I didn't know was how he's so obsessed with eye contact that he invented what his wife termed the "interrotron"--basically a pair of cameras, with teleprompters in each one, but instead of scrolling text, he places the video feed of each camera into the teleprompter of the other. That way you make eye contact with the interviewer/interviewee, and also make eye contact with the camera. As a tech geek, that delighted me. The other thing I didn't know, and couldn't really guess from his movies, is that Errol Morris is a very, very funny guy, and he's Jewish (I got kind of an Elliot Gould vibe from him). He makes very smart, sarcastic observations about his life, his work, etc. (he claims he's never made money off his documentaries, he makes a living filming commercials), and had the whole audience laughing. Which is a little unsettling, because we then watched a very serious, traumatic film about Abu Ghraib. But more on that in a bit. Here's a pic of Errol Morris and B. Ruby Rich on stage: 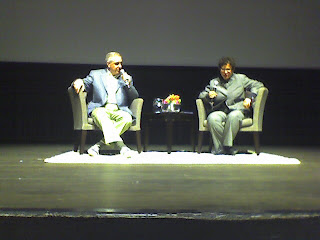 Okay, now on to the movie. "Standard Operating Procedure" is about Abu Ghraib, as I said. Specifically it's about the pictures that surfaced from there (you know, the naked Iraqi pile, Lyndie England smiling and pointing, etc.), and how they tell a story but tell an incomplete story. He interviewed 5 of the seven "bad apples" (including Lyndie England), but was denied access to the two who remain in prison. He also interviews the forensic investigator who organized all the digital photos, found the timestamps in the metadata, deduced the time offsets (one of the three cameras was off by as much as a year), and put together a case against them--a bit of a departure, but appealed to my geek sensibility. It's pretty traumatic to view these photographs again (unblurred now, so this is the first time for me seeing some of the more pornographic ones), but the interviews do a great job of putting them in context, at least from one point of view. And ultimately, it makes a convincing case that the photographs distort the truth as much as reveal (basically, abuses did happen, but the right people were not necessarily blamed). Near the end, one of the interviewees makes an interesting point. He says that this (what's in the pictures) wasn't abuse, this was humiliation or "softening up". Abuse happened, behind closed doors where there were no cameras, and hence the actual abusers got off scott free. Basically the interviewees present themselves as fundamentally good people, stuck in a bad situation, who were then made scapegoats.

Now there's a little controversy about this film. First, the very premise that the photographs don't tell the true story upsets some people, as does the "scapegoats" charge. More importantly, there's a controversy because Errol Morris paid the subjects for their interview (one didn't want payment--and Errol didn't reveal who--but Errol insisted since he had paid the other 4). Now this controversy makes very little sense to me. Certainly they have the right to tell their side of the story, and to make this movie without paying them would've been gross exploitation (especially if you've come to believe they're scapegoats and not really bad apples). More importantly, how does payment in this case taint anything they say. I'm trying to imagine myself in their situation and thinking 'well, if they aren't going to pay me, I'll tell the truth, but if they pay me I'll be be self-serving and duplicitous.' That makes no sense.

Okay, and I want to say something about being self-serving. All the interviewees, to some extent, were self-serving. That's obvious, because they want to clear their names and because I honestly believe (from making eye contact with them, thank you interrotron!) that they honestly believe themselves to be fundamentally good people who were put in a really shitty situation. They make a convincing case that as soon as the pictures came out, they were doomed to be scapegoats no matter their level of involvement (one of them produces letters home describing how she took pictures in order to prove abuse was going on). However, in this I feel a distinct lack of the voice of Charles Graner. He was recognized as sort of the ringleader of the bad apples, and as such is still in prison and couldn't be interviewed. While the interviewees make a case that they're scapegoats, in doing so they seem to make Graner the scapegoat. I'd be very interested, as soon as he's released, to hear his side of the story. Everybody else seems to believe he or she is fundamentally a good person. I'd be very interested in seeing Graner make the case that he's fundamentally good, too. Perhaps as bonus material on the 10th anniversary DVD?

Anyway, I'll just leave by saying the film and Q&A were so interesting that nearly everyone on the bus I took to BART was still talking about it. Pretty impressive.
Posted by puppymeat at 1:12 PM