Two movies last night, at the PFA. Let's just do this quickly.

First up "Vasermil", an Israeli film about youth violence and tension between Ethiopian, Russian, and Israeli Jews and about soccer. Shlomi is a racist pizza-delivery boy who's captain of his school soccer team. Adiel is an Ethiopian immigrant with mad skills but prefers pick-up games with his friends. Dima is a sullen Russian teen who's crazy good at the piano, has never played soccer, but is a fearless thug. They're naturally enemies, but when they're all put on the same team (Dima is originally the equipment manager, but becomes goalie after an injury), soccer and the forced teamwork starts to bring them together. It becomes an escape from the violence in the rest of their lives, but violence and trouble continues to barge in and threaten them. Good story, well told, I enjoyed it.

And then it was time for an insane story, bizarrely told. "Mock up on Mu" is Craig Baldwin's very strange found footage collage narrative. Baldwin himself described "collage narrative" as (possibly oxy?)moronic. Anyway, he uses found footage collage and a smattering of live-action shots to tell a story of L. Ron Hubbard, Scientology founder and ruler of the moon (or Mu) in the year 2019. He formed a conspiracy with Lockheed Martin (the guy, not just his company) to build a super-weapon so he can return from exile to earth. Our hero is Jack Parsons, founder of the Jet Propulsion Laboratory, who had faked his own death and lived as a b-movie actor for several years. Marjorie Cameron, beatnik artist and occultist is at first Hubbard's spy who later turns to Parson's side. They fight him with powerful sex magic with the help of Aleister Crowley (who might just be the Xenu that Hubbard trapped in the center of the earth ages ago). A weird sci-fi conspiracy theory. Now go Google some of those people and see how much of it is based on truth. That's the freaky part (yes, in real life the founder of JPL was a notorious occultist who was mentored by Crowley and practiced sex magic with Marjorie Cameron, whom he married). Here's a pic of director Craig Baldwin, who's kind of a nut: 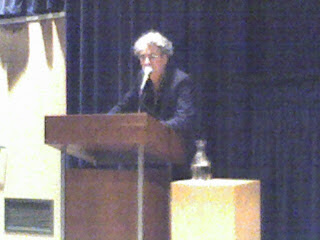 That was so much fun!
Posted by puppymeat at 1:58 PM