Now we're really getting down to the end. Two more movies on Tuesday, I'm skipping the festival (to see "Starslyderz") tonight, and then closing night.


But first I have to mention that nobody took me up on my offer for the free Cinevisa for the last two days of the festival. If you recall, I announced a contest for anyone to use my Cinevisa for tonight (Wednesday) and Thursday. All you had to do was walk up to me on Tuesday and recite a romantic line from a movie. And nobody did. So I have to assume that either A) I have no readers, or B) I'm so unattractive that free movies are not worth saying something romantic to me, even in jest. Either way, I've been appropriately humbled. (I suppose there are other possibilities, like my readers are all so prepared that they already have tickets to whatever they want to see. Or the majority of my readers are from out of town--perhaps I'm one of those geniuses who's appreciated far away but not at home, like Kurosawa or Jesus).


Anyway, on to the movies. First up was a rather unique experience. "La France" is a French war movie with more singing than war in it. Camille (Sylvie Testud) is the wife of a French soldier in WWI. She stopped receiving letters from him, so she decides to go and try to find him. She cuts her hair, dresses like a boy, and a gambit that requires some willing suspension of disbelief, meets up with a regiment of French soldiers and joins them. They're all acting a little weird, though, hiding in trees and pulling out instruments and singing at odd moments. There's sort of a mythical, dream-like quality about what's going on. She eventually fits in, and befriends the gruff leiutenant (Pascal Greggory). In some ways the regiment acts as a collective character, highlighting the absurdity, tediousness, and pain of war, and also the strength of cameraderie. It's a strange mix of gritty war drama and 60's American surf-pop style music. And here's a pic of the director who managed to mix the two, Serge Bozon: 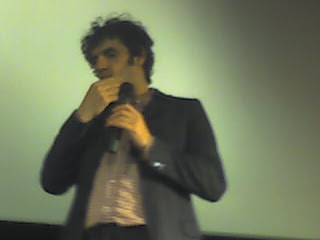 And then I treated myself to a big Hollywood movie, David Mamet's "Redbelt". Chiwetel Ejiofor is excellent as the too-noble-for-his-own-good jiu-jitsu instructor. He looks after his students more than he looks after his own business. When he saves the life of a cocky Hollywood action star Chet Franks (Tim Allen...seriously) he is invited into the high-class life of big entertainment (he's made a producer on Frank's film, and I couldn't stop thinking of the line in "State and Main" about what a producer credit means). Quickly he learns that he's been conned (how far back the con goes is never quite explained), and his training technique has bee co-opted for an ultimate fighting (mixed martial arts) competition. Faced with mounting bills and legal expenses, he's forced to fight on the undercard, where he could win up to $50,000, at the cost of his principles. But as he teaches his students, there's always an escape. Fairly impressive, with enough con games to be quintessential Mamet, but also enough hard-hitting fisticuffs to be something a little different, too. My only complaint would be that the ending was a little too abrupt and tidy.
And now I'm all caught up in my posts.
Posted by puppymeat at 11:48 AM

I was looking out for you as I headed from the Kabuki to the Clay that evening, but I couldn't find you. Not that I had much of a clue as to the answer to your trivia question...