Thank you to the good people at Indiefest who invited me to a last minute free screening of this new anti-war documentary.

On September 13, 2001, Thomas Young, inspired by patriotism called his army recruiter and enlisted to go smoke out the evil-doers in the caves of Afghanistan. However, after his training it became pretty clear that he wasn't going to Afghanistan, he was going to Iraq, even though that didn't make much sense to him. After just 5 days in Iraq, his (un-armored) truck was ambushed and he took a bullet in the back just below his left collarbone. It severed his spinal cord and left him paralyzed from his torso down. This movie jumps back and forth between the story of his homecoming (and wedding, recuperation, frustrations, and anti-war activism) and the historic debate in 2002 authorizing the war, where Robert Byrd becomes the hero of the anti-war side and the leader of what he calls "The Immortal 23" senators who voted against the war (I don't say this lightly, but Mr. Byrd, you are forgiven for once being a member of the KKK).

The film deftly moves between the two stories, but it's really Thomas Young's story that's the heart of the movie (you could make the case that Robert Byrd's story is then the brain of the
movie). His story is tragic and moving, but he's still a charming guy (he gets big laughs addressing a church and apologizing for all the "umms" and "ahs" he uses. "I'm sorry if I might sound presidential"), and the Iraq Veterans Against the War gave him a voice (and he's now a political blogger for Billboard magazine). And I should note, this is not about a guy or a family who is afraid to sacrifice more--his little brother is in Iraq now, on his second tour after being stop-lossed.

The audience was full of members of various anti-war organizations--Code Pink, Iraq Veteran Against the War, etc. I might've actually been the only person in the theater who was there as a movie fan first and an anti-war activist second (in fact, it's not fair to call myself an activist. I support anti-war activities, but not very actively. I mostly live my life, do my job, and watch movies). So I'll take the task of saying that besides having a very powerful story to tell about a very good character, it's also a well-made movie. A movie that jumps from the personal story to the political debate could've ended up a lot more scatter-shot, and there were countless temptations to get off on tangents (the coffins not being photographed, poor medical treatment of wounded vets, etc.). But they do a good job of keeping it on Thomas Young, and when he finally meets Robert Byrd and they honor the Immortal 23, there's a scene of them walking down the hallway in Congress that's among the best shots ever (and not just because it reminded me of "Bubba Ho-Tep", it's a powerful scene in and of itself).

Here's a pic of the co-directors, Ellen Spiro and Phil Donahue (making his feature co-directing debut): 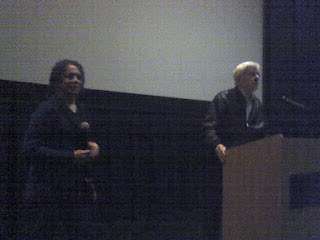 That's right, Phil freakin' Donahue! I met him and shook his hand last night. And let me tell you, in the Q&A he's still masterful at working an audience. Of course, this was a very friendly, receptive audience. The one exception being the issue of impeachment. Some in the audience still want to impeach Bush (and Cheney) rather than just wait out the final months of their term. Phil disagreed, saying (and I hope I got this 90+% right), "If you try to impeach Bush now, you'll be accused of undermining the President in a time of war, and you will elect John McCain. And you can quote me on that!" (so I did, and for the record I agree). I also agree that trying to impeach Bush will a) be a failure, because there are enough Republicans in Congress to block it, and b) just come off as a political show of sour grapes and will make you look bitter (sorry for using such a political hot-potato word).

"Body of War" opens this Friday, April 18, at the Landmark Clay in San Francisco and the Landmark Shattuck in Berkeley. Unless I have this wrong or they've changed plans, Ellen Spiro and Phil Donahue will be at the 4:45 show at the Clay on Saturday, and the 4:50 show at the Shattuck on Sunday. It's playing now or soon in select theaters across the country, check out their website for more information.
Posted by puppymeat at 8:15 AM