All right, I have a chance to get all caught up this morning before I head to the movies, so let's try to do this quickly. 5 movies yesterday:

First up was "Just Like Home", which I chose because I'm a sucker for Danish dark comedy, and this one was by Lone Scherfig, the director of "Wilbur Wants to Kill Himself" (and "Italian for Beginners", but I actually haven't seen that). It's about a small town, where everybody knows everyone else but everyone also has their little secrets. We start with Margrethe, who's just moving to the town after running away from an extremist Christian cult. She provides the outside eyes for the town (although very biased, as she's still stuck to the high moral purity of her cult, and must have a cold drink of water whenever she has an impure thought). She starts cleaning house for a local lecturer, and volunteers at the Silent Ear, a sort of help hotline for the town. But the town erupts in scandal with reports of a late-night streaker--a naked man, and you could see everything! Construction on the town center stops, and everyone turns against each other as the town grinds to a paranoid halt. The Silent Ear becomes a hotline for gossip, accusations, and even confessions. The movie is pretty funny at times, but suffers a bit of unevenness because it's mostly improvised, with scenes sketched out the day of shooting. It still works reasonably well, and if I didn't know how good Scherfig was at scripted stories like "Wilbur Wants to Kill Himself", I'd probably praise the improvised style. As it is, there's a bit of a letdown from inflated expectations.

Yes, expectations can kill a movie, and having no expectations can make a movie even better. That was the case for "The Toe Tactic" which I think I just chose because it sounded like an interesting mix of animation and live action. If I'd known director Emily Hubley was also the animator on "Hedwig and the Angry Inch" as well as the animator of several award winning films, my expectations might have been higher, but I think I would've still been pleased with the results. It's a relentlessly sweet film, with a somewhat convoluted live-action story. Mona Peek (Lily Rabe) loses her wallet. It's found by a young boy who steals $60 for piano lessons. Mona goes to work for an old woman cataloguing the notes of her old flame. In the building, she meets the charming "Elevator Man". He suggests they go for drinks at a local restaurant/bar/open mic stage. At first she was unsure, but when the mother of the boy who found the wallet calls her and tells her to meet at the same restaurant/bar to pick it up, she figures it's fate. And so on (I won't spoil all the story). Also, there's something about Mona's dead father, and a fragment of his bone (form the cremation), that she carries with her. If it seems like too many coincidences in the narrative, it's because the whole thing is a game played by some animated dogs, who serve as instigators (by stealing her wallet and dropping it in front of the boy, for example), and as commentators on both the action and the movie itself ('e.g., 'hey! Can you introduce a new character here'). I'm afraid I'm not doing this movie justice, because it's not an easy thing to summarize. It's charming and playful, and although there are plenty of movies that mix animation and live-action, I don't think I've seen any that do it quite like this.

Here's a pic of director Emily Hubley answering questions (and fielding compliments) at the Q&A. 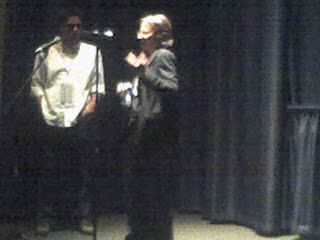 So then I went to the world premiere of "Ice People", a fascinating documentary about Antarctic geologists. Anne Aghion has apparently made many documentaries (I don't believe I've seen any of them, though), and she certainly shows a steady hand here. There are great landscape shots, that really capture the scope of the terrain, and there are interesting, funny interviews with the scientists and support staff at McMurdo base. There was a really interesting interplay of wide open lonely places and the claustrophobic cramped quarters of the tents and the base. It's funny that when you're 100 km away from any sign of civilization--and not much civilization at that--you can still resent the only three colleagues out there with you and really crave some "alone time". My only complaint would be that it's a little light on the science, but that's sort of my personal taste and I understand why that is. Besides, 3 of the 4 scientists (2 doctors, 2 undergrads) were there for the Q&A and gave us a bit more of the science (including a sneak peek of not-yet-published papers). Pretty cool. Here's a pic of Dr. Adam Lewis, Kelly Gorz (undergrad researcher), cameraman Sylvestre Guidi (hidden behind the mic), director Anne Aghion (that white glow in the middle), and Dr. Allan Ashworth: 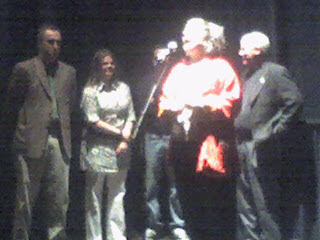 And then there was "Water Lilies", a mildly funny/dramatic French film about teen girl angst, budding sexuality (and lesbianism), and synchronized swimming. Marie is a shy girl who's a fan of synchronized swimming, or at least a fan of team captain Floriane, an unabashed flirt. Anne is a portly, iconoclastic swimmer with a crush on the male swim coach--she routinely changes after all the other girls leave in hopes that he'll walk in while she's naked. Marie tries to buddy up to Floriane, who at first uses her as an excuse to meet her boyfriend, but eventually confesses that she's not the slut everyone thinks she is--she's actually still a virgin, and she doesn't much like guys, but she likes the reputation. In fact, she really likes Marie, but they're both very afraid. Meanwhile their friendship drives a wedge between Marie and Anne (oh yeah, did I mention they were best friends for like, forever? They were). Anyway, it's a very sensitive examination of budding teen girl sexuality, and synchronized swimming becomes a perfect metaphor as it involves frantic effort being made to look easy, with a compulsory smile plastered on their faces. Director Céline Sciamma has created a pretty well made film for her debut.

And finally, this night I had plenty of time to pound a few free Stella Artois before the late show. That show was "Go Go Tales", Abel Ferrara's attempt to channel Robert Altman making a movie about a strip club. Personally I think Altman wouldn't have gone so far over the top (particularly with the shrill landlady), but this was still a fun screwball let's-throw-everything-at-the-wall-and-see-what-sticks comedy. Willem Dafoe is a struggling club owner, the Ray Ruby of Ray Ruby's Paradise Lounge. The club is going under, and he's addicted to gambling, with lotto tickets stashed all over the club. A cavalcade of wacky characters come in and out of the club, both on stage and off, in the audience and in the back rooms. Asia Argento is underused as a veteran showgirl with a giant dog that disrupts the club. Ray hasn't paid the girls in 48 hours, and they're getting restless. Ray and his crew (including Bob Hoskins) placate the girls, and make the show go on until he can "get back from the bank" (what bank is open at midnight?). Meanwhile Ray isn't really a scumbag, he believes in the Paradise Lounge as a family (at least, I believe he believes, and isn't just blowing smoke to buy time). Really late at night the club actually turns into a talent show, with talent agents coming in to watch singing and magic tricks instead of stripping. As I said, it's a throw-everything-at-the-wall-and-see-what-sticks approach, and it really captures the Ray's frantic desperation as he tries to save his club without showing anyone that it's in trouble. Wild and weird, I'm glad I had a few drinks before this.

And then I took two buses home, which gave me time to draft this post. So if it makes no sense, it's because it was drafted on a bumpy bus at 3 am, and edited in a hurry before I ran off to more movies. That's it.