This is the first time I've ever splurged for the opening night of the SF International, so I guess my film-going cred has increased somewhat. Of course, if you've been reading my previous posts, you know why I had to go to this opening night. But I promise I'll restrain myself and not refer to Asia Argento as "my pretend girlfriend" more than 3 times in this post (and that counts as one).

But in truth, I was almost as excited to see the opening night film, "The Last Mistress" ("Une vieille maîtresse") for the director, Catherine Breillat. Breillat has made a career out of frank, explicit, somewhat shocking and humorous explorations of female sexuality ("Romance", "Fat Girl", "Brief Crossing", "Sex is Comedy", etc.) This time she goes back to the turn-of-a-couple-centuries-ago (the 18th century turning into the 19th century) and makes a stately, aristocratic period piece. Ryno de Marigny (impressive newcomer Fu'ad Ait Aattou) has had a 10 year off-on-off-on relationship with his Spanish mistress Vellini (my pretend girlfriend Asia Argento). They've both had other lovers, but they keep coming back to each other. But now Marigny is getting married to the lovely, virtuous, and wealthy aristocrat Hermangarde (Roxane Mesquida), and so he must stop seeing Vellini--both for propriety and because he claims he no longer loves her (and hasn't for years). Their history is told--from his perspective--during an all-night inquisition by Hermangarde's feisty, scene-stealing, grandmother, La marquise de Flers (Claude Sarraute). Meanwhile the action is commented on by the catty gossiping couple Le vicomte de Prony and La comtesse d'Artelles (Michael Lonsdale and Yolande Moreau). Without these framing devices, the story would be much less interesting, as there's only so much 'I hate you, I love you, I hate you, I love you...' I can take. Of course, if it's punctuated by Asia Argento drinking the blood from your bullet wound, that makes it a lot more exciting.


Catherine Breillat was there for the screening. Here's a pic of her (in the middle) with her translator Robert Gray (left) and SFIFF executive director Graham Leggat (right): 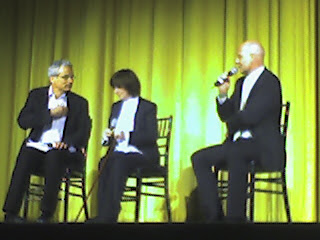 Oh, and since I have one left--Asia Argento is my pretend girlfriend. Here's looking forward to the rest of the festival!
Posted by puppymeat at 8:00 AM

Hey. You said Asia Argento FOUR times. What the fug?

BTW, just got back from day 2. The late show was Dario Argento's "Mother of Tears", starring Asia. Awesome!

Oops. My mistake. But at least I read it and looked for your pretend girlfriend's name.