After 2+ years, it was great to be back with the fans, drinking beer and yelling my head off in the Casbah. All that Earthquakes excitiment even spontaneously turned my hair blue! 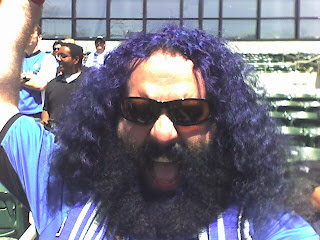 And the Quakes lost, 1-0, I don't want to talk about it. But they looked okay out there, controlling the game for a lot of the time. They'll break through soon and go on a winning streak. I'm letting them play like an expansion team this year. Then next year compete fiercely. Then they're on notice that we demand a championship by 2010. Of course, if they'd rather win one earlier, I wouldn't object.
Posted by puppymeat at 10:51 PM