I spent all of last Sunday at the PFA, and saw 4 movies, starting with one of the most amazing things I've ever seen, "Forbidden Lie$". Here's the story, in 1996 a Jordanian woman named Dalia fell in love with a christian man. She co-owned and operated a unisex salon, where she cut his hair. They never consummated their love, but her brother saw them talking and holding hands at a cafe. The family was shamed, and to restore honor the father murdered her in one of the infamous "honor killings". Dalia's best friend (and co-owner of the salon) Norma Khouri, fled to Greece, where she lived as a refugee and wrote a book about the honor killing, "Forbidden Love". She emigrated to Australia, got an agent, and got the book published. It became an international best seller, and raised awareness about the issue of honor killings. But here's the kicker: Warning, spoilers in the rest of this review, so highlight the text to read it.

It was all a hoax! No one named Dalia was murdered in an honor killing in 1996. In fact, many of the places in the book didn't exist in 1996. And Norma Khouri is a conwoman from Chicago who is wanted by the FBI. Or is she? Actually, she was born in Jordan. She grew up in Chicago, but returned to Jordan regularly. She claims she changed names, places, dates in order to protect herself, but the general story is based on an honor killing of a friend of hers. The filmmakers got nearly unfettered access to her (it seems like she went along with the movie in an attempt to clear her name), as she spins story after story (trying to explain, for example, why despite passing herself off as a virginal refugee from an oppressive culture, she has a husband and children back in America). She even takes them back to Jordan to find proof of her friend's murder. Proof she finds, until it's pointed out that she got this from a newspaper story that happened after she at least had a deal to write the book. Okay, well then that was a test, a test the filmmakers failed, as they revealed her data to independent sources. It seems every step of the way, she has an explanation, some spin that makes you almost ready to believe her, and then the bottom falls out again. Absolutely amazing, by the end I didn't know which way was up. End spoilers.

Next up was a more straightforward documentary, "Latent Argentina" ("Argentina latente", it's translated "Latent Argentina" in the program guide, but "Dormant Argentina" in the film). Apparently this is the second in a documentary trilogy by director Fernando E. Solana. The first in the trilogy, "The Dignity of Nobodies", I missed when it played at SFIFF two years ago. I say this only to note that I'm coming to this movie from perhaps a different perspective than a lot of the audience (or the intended audience). The premise, which is argued convincingly, is that Argentina should be an economic powerhouse. It has vast natural resources and a history of scientific and technological prowess. The fact that Argentina is impoverished with runaway inflation Solanas blames initially on economic colonialism, with groups like the trilateral commission deciding on their own that Argentina should be a source of cheap raw materials instead of having a manufacturing industry. But he goes on to say that it's more the fault of "mental colonialism", where Argentinians don't know what great resources--mineral, agricultural, mental, etc.--they have. So he showcases example after example of people who are trying to "wake up" the dormant Argentina. In doing so, he's unapologetically socialist, extolling for example the virtues of a factory where the workers took over after the owners ran out of money for wages. He also heavily stresses the promise of science and technology in Argentina, which makes me happy as a scientist. The argument is convincingly made, but the endless parade of examples gets a bit tedious. As one man I spoke with afterwards said, there's not much information in it that you couldn't get out of pamphlet describing these examples. I wouldn't go quite that far, but it's a fair point. I can see, however, the virtue in Solanas giving these people more time and hopefully turning them into heroes for their country.


Next up was a restoration screening of the classic 1945 Gene Tierney Technicolor film-noir (I know that shouldn't make sense, but it does) "Leave Her to Heaven". The restoration was done by 20th Century Fox and the Film Foundation, an organization founded by Martin Scorsese and others to protect, restore, and exhibit classic and lost films. Schawn Belston, Vice President of Asset Management & Film Preservation at Twentieth Century Fox Film Corporation, who oversaw the reconstruction of this film, was there to speak a little bit about the film and the process of restoring it. A short clip of the best archive print pre-restoration (which looked pretty bad) and the various levels of correction used to make the final product (which looked gorgeous!) was pretty interesting. As best I can remember, it was first scanned to digital, then they digitally fixed the 3-strip technicolor hues, then the color timing, removed artifacts and scratches, and clear up some of the graininess. Finally, they struck a new film print from that digital output. Not exactly the same process in which it was shot, but a good approximation. Here's a picture of Schawn Belston talking about the process: 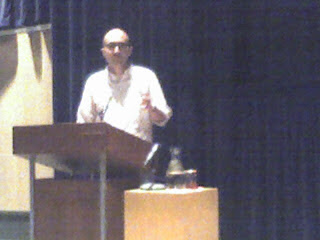 Oh yeah, and as for the film itself, I described it as a "technicolor film-noir" above (actually, not my words, I was quoting the speaker who introduced the film). Essentially I mean it has all the plot elements of a film noir (femme fatale, murder, intrigue) but in glorious bright technicolor.
Ellen Berent (Gene Tierney, nominated for an Oscar for this role) is beautiful heiress with a nasty habit of becoming overpossessive of everything (and everyone) she loves. Too bad for Richard, a novelist whom she meets on the train (she doesn't know she's reading his novel), since she falls in love with him. And what starts out grand, quickly turns sinister, as anyone getting between them is in danger--his crippled brother, her sister, her mother.... As I said, the colors and cinematography are gorgeous (setting ranges from New Mexico to Maine, although Maine looks a lot like Malibu). And the story holds up very well after 60+ years (except for the final courtroom scene, that seems quaint and laughable after so many TV courtroom dramas). An excellent movie experience, and I'm looking forward to seeing what the Film Foundation will restore and exhibit next.

And finally, I ended the night on a bit of bizarre Swedish dark comedy "You, the Living". With almost no traditional narrative, it's an odd series of vignettes about depressed people (Sweden routinely has among the highest suicide rate in the world). The vignettes are semi-related, as they all seem to take place in the same town at the same time, and occasionally overlap. And they're very related by the sense of comic melancholy that pervades it. There's the guy with the nightmare about bombers, there's the girl who dumps her boyfriend in a public park and spends the whole movie screaming about how no one understands her. There's the Louisiana Brass Band, playing Dixieland tunes to a dirge beat (and literally becoming a dirge, when they're hired to play a funeral). And then it gets weird. There's a rock star and an apartment building moving through town. I have no idea what to make of it, but it made me laugh. So I'll just end it there.
Posted by puppymeat at 7:42 AM