First up was a (thankfully) free 75 minute toy commercial, "GoBots: Battle of the Rock Lords". Need I say more? A cheesy Hanna-Barbera show about a cheesy Transformers ripoff actually snuck it's way onto the big screen in 1986 just months before "The Transformers" did--and then snuck away a week later. Inexplicably, they got the voice talents of Roddy McDowall, Telly Savalas, and Margot Kidder (I assume this is what made her go insane) to tell the story of robots who convert (not transform) into vehicles teaming up with robots who convert into--get this--rocks! It also features such great dialogue as "These stones have such gall!" Audience reaction can be summed up two ways. First, there was the old man who had never heard of GoBots, came in for a free movie, and thanked George ecstatically for playing it. Then there was the ~5 year old kid who came with his mommy and said, while leaving the theater, "I didn't like that very much!" I'm with you, kid!

So then there was a program that you had to pay for, and is actually worth paying for. "Drawing Outside the Lines" is quite possibly my favorite of the animated short programs. Actually, it's only partially animated, as the theme is all about mixing animation and live-action. Here's the rundown:

"Toward a Theory of the Evolution of the Turkey"--Remember drawing those hand outline turkeys in grade school? What if you got a little too creative? And what if your creations came to life? I'll tell you what, it'd be cool!
"Little Red"--Stop motion Red Riding Hood jumps into a giant book, and walks out onto the streets of the city. Finding more danger there, she jumps back into the stop-motion world, and beats the crap out of the wolf.
"on the subjectivity of the notion of existence in relation to the authenticity of female climax"--A conversation in a cafe, first two guys talking about women faking orgasms, then one leaves, the remaining guy meets his girlfriend, and the conversation continues. The surrounding world shifts in and out of existence as a metaphor for how men's existence is tied to the authenticity of the orgasms of their lovers. It's very, very, very french.
"Fired"--Guy gets a job as a lab assistant. One of the little claymation dinosaurs escapes and bites him. He gets fired, goes insane, gets animated, and gets revenge. Awesome! Here's a pic of two of the filmmakers. I believe they are director Chris Weller and the star (whose name I didn't catch. Sorry!): 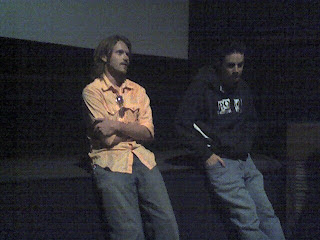 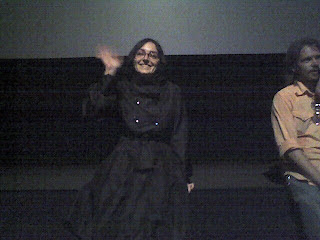 "Badly Drawn Roy"--A hilarious Irish mockumentary of Roy, born into a regular working class Dublin family. Problem is, not only is Roy animated, but he's a badly drawn sketch, never cleaned up. He has to face a lot of prejudice, but he's following his dreams to Hollywood! This could actually work well stretched out to feature length.

Next up was a program of censored cartoons, collectively called "Bad Bugs Bunny". Specifically focusing on censored Warner Bros. cartoons, although this program could be made from the output of any studio from the 30's-60's. Once upon a time, cartoons (which were shown for adults as well as children) featured violence, racism, and sexism to a degree that is unacceptable today. So, these offensive cartoons have been locked away forever. Except for individual collectors, like Dennis Nyback who curated this program, pictured here: 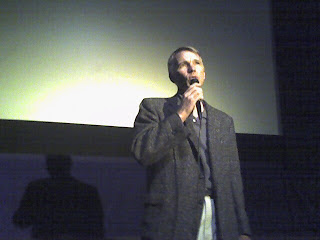 I'm a little at a loss on how to blog this, because the program is supposed to be a secret for legal reasons. So I'll write in generalities, and any examples I link to were not necessarily in the program, perhaps I just found them on censored cartoons list. Anyway, the program did keep up the festival theme of violence against dogs. It also had blatant racism (including a slavery joke). It had violence against women. It had horrible Asian stereotypes (we were at war with Japan at the time). It had smoking (also featuring black face jokes). There are jokes about Arabs (featuring a suicide bomber gag, in 1940!). There are jokes about Native Americans. There's even one that wasn't really offensive, but parodied a popular singer who had enough clout to threaten a lawsuit. And that's really the corporate censorship message of this program. All of these cartoons offended someone when they were first aired. However, they usually offended powerless minorities who had to just suck it up and take it. But when the powerful are offended, things change.

Oh yeah, and I ran into my (just happens to be black) friend Guy Gayle (drummer for the soon-to-be reborn San Jose Earthquakes) before the program. He was there to see it, too. So I had to sit through a program of incredibly racist cartoons with a black friend of mine in the audience. I didn't see him after the program, and I stuck around for the rest of the films. But the next time I see him, I must remember to ask him what he thought.

Next up was a real gem, the world premiere of the cerebral and minimalist sci-fi epic, "The Man From Earth", aka "Jerome Bixby's The Man From Earth". Jerome Bixby is a famous sci-fi writer who died about 9 years ago. He was most famous as a writer for "Star Trek" (the original series) where he wrote, among other episodes, "Requiem for Methusaleh". Bixby spent a long time (according to director Richard Schenkman, the last 40 years of his life) obsessing over the logistics of living a really, really long time. In "The Man From Earth" John Oldman (pun intended) is abruptly leaving his university job of 10 years to hit the open road. His friends (colleagues and students) come to his place for an impromptu going away party, and to press him about why he's leaving so suddenly. There he drops a bombshell on them--he's actually 14,000 years old, probably a cro-magnon (they didn't have a word for it in his time, obviously), and has to leave now before people learn too much. At first they treat it like a wild story, a sci-fi novel idea. But slowly he starts convincing them that it's either true, he's insane, or he's an asshole who's taking the joke too far. The logistics are quite fascinating, especially how his long life doesn't give him any great insights beyond the fact that we keep making the same mistakes. He can't be more advanced than the greatest knowledge of his time, so he can't--for example--know the world's round before everyone else did. Nor does he exactly know where he's from, although he surmises from later anthropology. Most of all the movie uses the premise to riff on the human condition--history, psychology, science, religion, etc. And in the process, it took me further in my mind than most movies, even with (especially with) spaceships.

I don't want to spoil any big revelations, so I'll just say a few generalities. First, the acting is great, especially William Katt (good to see the Greatest American Hero getting work), Tony Todd (in a much better role than in "The Thirst") and David Lee Smith as Oldman. The idea idea is clever and well fleshed out, obviously the product of someone who has thought it over from every angle. The staging is great, keeping things moving despite being limited to a single living room. In fact, the setting would make it perfect to adapt to a stage play (one I would readily pay to see). All in all, a great movie. Here's a pic of director Richard Schenkman: 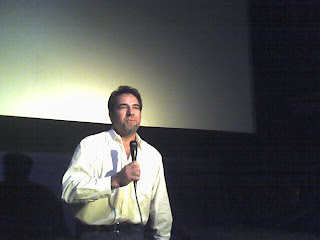 And finally, the last movie was an Italian splatter flick, "The Last House in the Woods" with the short "The Queen of Hearts". The short was about a woman who hunts men who deserves to die and rips their hearts out. Her business is killing, and BUSINESS IS GOOD!

"The Last House in the Woods" aka "Il Bosco Fuori" is a good old Italian bloodletting, with blood courtesy of Italian gore effects master (and longtime Dario Argento collaborator) Sergio Stivaletti (who claims this is the most blood he's ever used in a movie. A young man tries to win back his ex-girlfriend. On the way out to the woods they get into a car accident and are then attacked by some thugs. They're rescued by an older couple, who take them to their house deep in the woods. They appear to be safe, but it turns out this nice suburban couple (with a 7 year old son) are actually psychotic killers in the "Texas Chainsaw Massacre" vein. Blood-larity ensues. Overall, the blood and gore are well done, the story is good enough, but the cinematography is a little weak. Too many light shots were blown out or dark shots were lost in the shadows, and not for any good reason I could discern--it didn't look artistic as much as just bad. But that didn't entirely ruin an otherwise good movie.

Unfortunately, what did ruin it were some loud assholes in the audience. It's fine if you're excited about the movie. Go ahead and cheer for Sergio Stivaletti, I did (quietly). But don't scream, "And if you don't know who he is, YOU SUCK!" And don't continue yelling loudly at the screen all through the movie, give it up after the opening credits. Whoever you were, you suck! I hope the next time you're in a theater, you're either significantly more sober, or I'm not there.

Okay, and that (finally) was last Sunday. Tonight (Wednesday, June 13) is the opening night of the Primitive Screwheads "Night of the Living Dead--Live!" I'll be there.
Posted by puppymeat at 8:01 AM

I'll cop to being one of the people who was smarting off, but I shut up the moment someone said, er, "SHUT UP!"

I quickly realized I was being "that guy" and summarily spanked myself with a healthy dose of Catholic guilt.

It's cool. I know you were pretty colossally drunk that night. I just wanted to single out the behavior (without mentioning who) as a cautionary tale. Luckily people think I look like Jesus, so I'm supposed to be forgiving.

HAHAHAHAHAHA!
Well done. And NO, THAT IS NOT NORMAL BEHAVIOR FOR ME...*shakes head at self and laughs*

And no you don't look like Jesus you look like Allan Moore. Speaking of which, I summarily went out and bout V FOR VENDETTA again after our discussion (I needed a replacement copy anyway) I think you're right.