Or rather, night 2. I missed the daytime shows because I was down in San Jose watching the USA beat China 4-1. I thought it was actually a kinda lackluster game, so it'll be interesting to see how we do heading into the CONCACAF gold Cup starting Thursday, and especially the Copa America (against South American teams) at the end of June. More importantly, it was great to be back tailgating for several hours with my old Club Quakes friends. I can't wait to get our team back.

But that's all off topic, the important thing is I didn't even get out of there in time to catch "Blood Car" at 9:30 (although I saw it at Cinequest (scroll down to the final paragraph). I got up to the Roxie as "Blood Car" was letting out, and ran into some friends who just saw it and loved it. "Blood Car" plays again June 5 at 5:15 and June 7 at 9:30, I highly recommend it (and I'll at least be at the June 7 show).

But finally lets get to the one movie I did make it to, the midnight showing of Richard Elfman's "Forbidden Zone". I'd never seen this 1980 cult classic from the brother of composer Danny Elfman (who scores the film with his Mystic Knights of the Oingo Boingo and appears as Satan himself), and after watching it, I'm still not sure if I've seen it. An odd bit of black and white comic surrealism, the Hercules family lives in a house with a secret passage to the Sixth Dimension, where Herve Villachez is king, there's a frog servant, and...what the fuck did I just watch? I'm not even going to bother. I've seen some strange-ass movies in my time, but this one walks that fine line of having just enough pretense of a plot to make you think you should be able to follow it. You can't, don't try.
Richard Elfman was there, and gave one of the wilder Q&A sessions I've seen. He's a natural performer, and excitedly answered any question with a goofy ass grin on his face. Finally, the night ended with someone asking about the gratuitous nudity in the movie (and someone else asking why there wasn't more gratuitous nudity), so he responded by turning around, dropping his pants, and mooning the audience. Of course, I'm in the front row so my night ended about 5 feet away from Richard Elfman's taint. Then I had to go home and try to sleep. Here's a pic of a fully clothed Richard Elfman: 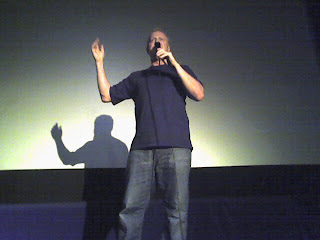 Posted by puppymeat at 7:57 AM